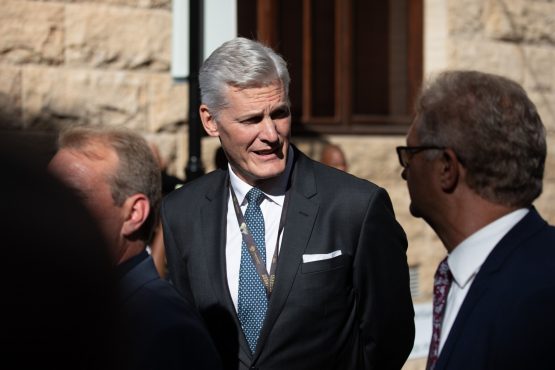 A fallout between top executives at Eskom took a new turn, with the South African power utility’s chief executive officer accusing its now-suspended chief procurement officer of facilitating R8 billion of deals with a company suspected of fraud.

Eskom concluded the fuel oil supply contracts with Econ Oil & Energy even though a probe commissioned by the utility found there was reason to suspect its sole director Nothemba Mlonzi had a corrupt relationship with senior Eskom manager Thandi Marah. Both Marah and Mlonzi have declined to comment.

Solly Tshitangano, the procurement officer, has been charged by Eskom with “failing to investigate alleged overcharging and corrupt practices by Econ,” Andre de Ruyter, the utility’s CEO, said in a March 29 affidavit to the South African Parliament’s public accounts committee. Tshitangano allowed the deals to go ahead “despite receiving legal advice that such contracts should not be concluded, and a request from me to heed such advice,” he said.

Tshitangano has accused De Ruyter of racism because of the way Black suppliers to Eskom are allegedly treated, and Eskom’s board has ordered a probe into the allegation. The altercation comes as Eskom struggles to service its R464 billion debt pile and supply sufficient electricity to meet the nation’s needs from its old and poorly maintained plants.

The forensic probe, carried out by the legal firm Bowmans, found that Mlonzi acceded to requests from Marah to make donations to groups including the ruling African National Congress. Econ Oil overcharged Eskom by R1.2 billion between 2012 and 2016, according to a presentation prepared by Nerina Otto, the utility’s acting group executive for legal and compliance.

Tshitangano “inexplicably” did not inform Econ of the allegations against it or ask the company to respond to them, De Ruyter said. “Tshitangano’s insinuation that under my authority, Eskom treats White-owned entities differently from Black-owned entities is entirely without basis.”

What a mess, now we know where tax payer money goes to!

Some people have to work like slaves while others get donations!

Donations with Tax payer money! Money I and you worked for!

I called this one.

Well lets be honest – wasn’t exactly difficult to call as no matter where the word Racism gets raised there is an immediate red flag to corruption. It is the way of the land.

I did too, the moment he scratched, boom they need him out all the cadres caught once again with their pants down. Typical.

Such a bunch of thieves.

I wonder how long it will take for the racism card to be played here?

I thought it had already be played…

De Ruyter is a hero to offer to take on this mess. How can contracts worth billions be handled with so little real oversight? – the place is rotten to the core.

Honest to God,hy is rerig n held (he is truly a hero). Want hy sit in die midel van n grot van diewe (for he is sitting right smack in the middle of a cave of thieves. And political jackals are just milling around waiting to raid it as though its a fat lump of staak! The government better move in there and re-oil his lamp and or shine a spotlight on it. Don’t even allow a low wind to put the flame out. Charge and arrest those who are respnosible for wrong doing. Let the man do his job.

The anc must just disband and disappear off the face of the earth!!!

The worse thing that could ever happen to this country and continent.

Julius is waiting in the wings. Zuma will hand the everlasting captured over to him.

If it has to do with donations to the ANC then De Ruyter is out the door.

The Tax payer must keep on working to pay for the ANC donations.

100% correlation between the level of corruption and the propensity to cry racism. why do we not see more op-ed’s about african people with power’s entitlement to be corrupt? it’s a plague on this continent, ubiquitous and destroys countries without fail. guess people are too scared of the fascistic woke crowd going into a racism frenzy.

The last recourse of the fraudsters, thieves, scamsters, etc. …… accuse everyone of racism. Also try out “victimhood” and if that doesn’t work, start circulating fables about conspiracies and threaten insurgencies.
I note a new trick that’s emerging …. accuse judges of bias and the legal system of being a “pawn of apartheid”.

Here we go again, lets use the “Race card” when backed in a corner. Adult men don’t behave this way, only boys with no testicles. For once be a man, stand up and admit you messed up

Once worked for this great organization, anything over R50m went to Board for approval, there were so many checks that the process of getting anything to the stage of submission for approval was more difficult than to Launch a Nuclear missile!

You just need to watch the gripping documentary series done by National Geographic called Narco Wars or Drug Inc to see how the corrupt mafia ANC cadres (Nothemba Mlonzi, Thandi Marah etc etc) start behaving when someone starts getting between their ill gotten gains and them.

The absolute whole of the ANC are the problem. Do not get sideswiped by the claims of racism.

“Tshitangano’s insinuation that under my authority, Eskom treats White-owned entities differently from Black-owned entities is entirely without basis.”

With all the affirmative procurement I would like to know who these white-owned entities are that still manage to get business with Eskom.

MR De Ruyter please get back to work.

WE NEED ELECTRICITY until i leave South africa mentally, spiritually and physically.

This mess is the result of racist and divisive populist policies like BEE and cadre deployment. When the law treats some citizens differently from others, then the lowest opportunistic scum will jump at every opportunity to abuse and exploit the populist narrative for their own benefit. It has come back to haunt even the ANC itself, as the RET faction is eating the ANC from the inside.

The South African socialist experiment of the past 27 years proves that this shortsighted and ignorant quest for redress and material equality delivers the opposite, in the form of universal poverty and decay, as measured by the Debt/GDP ratio and the record-high unemployment rate.

If we are equal under the law and enjoy equal opportunities, then vast differences in material position will be inevitable, because our mindsets, work ethics and mental capabilities differ.

“From the fact that people are very different, it follows that, if we treat them equally, the result must be inequality in their actual position, and that the only way to place them in an equal position would be to treat them differently. Equality before the law and material equality are therefore not only different but are in conflict with each other, and we can achieve either one or the other, but not both at the same time. The equality before the law which freedom requires leads to material inequality.” FA Hayek (The Constitution of Liberty)

“Tshitangano has accused De Ruyter of racism”… the last resort of the inexcusably corrupt.

Because he is too scared of losing his job.

If so then it is all unconstitutional.

You cannot have double standards!

If all you have is the ‘race card’ then you have nothing. It should made be a crime to falsely claim racism.

And silence from Comrade Jamnadas busy firing up his bankrupt wreck of an airline to fly his fellow ANC cadres all over the world at taxpayer expense!

No comment, no leadership, no expertise, no ideas..nothing but mediocrity. Jamnadas should really retire in disgrace for the shameful way that he has conducted himself!

Isn’t it ironic – these “skelems” playing the race card when it was racist BEE policies that got them their jobs in the first place! talk about the pot calling the kettle black! Hilarious!

Glad things like this is being made public and exposed. However it will be a long time if ever for Eakom to ever recover from being mismanaged for so many years. What a power house it was back in the day..

Well let’s just be honest here, almost all allegations of racism is always entirely without basis. It’s a copout most of the time, this time Solly tried to use the race card to hide the fact that he is a crook! Hahahaha…I love it when the race card backfires, beautiful!!

And so the mud-slinging ensues…

If all fails, blame it on racism.