Second half outlook looks brighter; analysts not impressed.
By Eleanor Becker 23 May 2017  00:35 Poor hedges on maize and a stronger rand are among factors that impacted the interim results of SA food and beverage producer Pioneer Foods.

(In 2016, EPS was adjusted for the impairment of Quantum Foods’ shares held by Phase II B-BBEE SPVs.)

A “confluence of various inhibitors contributed to a material decline in profitability”, with maize playing the biggest role due to the “unfavourable procurement position” taken in 2016 to protect supply.

Says Rexsolom Invest co-founder Anthony Rocchi: “You have to feel for the management of Pioneer Foods who have doubled return on assets between 2013 and 2016, only to have exogenous factors cause returns to come crashing down – a stark reminder of the cyclical nature inherent in the business.” 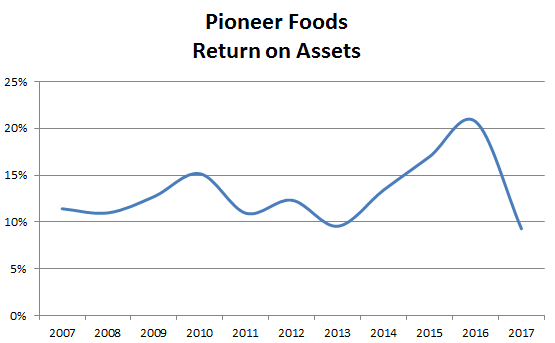 Group turnover was up 2%, with the local business increasing turnover 4% and international declining 11%.

Damon Buss, equity analyst at Electus, says these were a disappointing set of results. “Whilst the poor hedges on maize and the resulting impact on the core division Essential Foods had been well flagged by management, the performances from Groceries (operating profit down 12%) and International (operating profit down 73%) were much weaker than expected.”

White Star, Sasko and Spekko are some of the brands in this division. Essential Foods accounts for nearly half the group’s operating profit, says Shaun Murison, IG South Africa market analyst.

Pioneer says that the margin drag on maize will stop as of June, due to lower-cost raw material. Strict cost management was enforced to partially mitigate this.

Buss said stringent cost management, where operating expense growth was restricted to 3%, was a positive. “Since becoming CEO, Phil Roux has embedded this strict cost management philosophy into the business and it should help to limit any further margin erosion.”

Pioneer admitted Groceries’ performance was disappointing – beverages in particular. “Cost push inflation into the summer season coupled with a cooler summer inland, impacted volumes and margins significantly,” it noted in the Sens statement.

Buss says: “Market share losses in four out of five categories in the groceries division are concerning, especially with the numerous comments at the results presentation that the competition is more combative than ever, as this means consumers are finding better value in other brands.”

The international business comprises 21% of operating profit and experienced the most severe profit contraction, due to lower export beverage volumes, a smaller raisin crop and a stronger rand.

Positively, in March, Pioneer acquired a 49.89% stake in Weetabix East Africa for R190 million. This means a partnership with Weetabix UK and a chance to build a strong “breakfast position” in East Africa and a platform to introduce more Pioneer products.

Pioneer believes its performance will improve in the second half, “notwithstanding a constrained trading environment in South Africa. An increased raisin supply, lower maize input costs from June, lower beverage input costs and Aeroton bakery and Weet-Bix capacity should help to improve profitability”.

“Whilst the lower maize price will start benefitting Pioneer from June onwards, the negative operating leverage from volumes losses, combined with increased investment (either through more marketing and/or lower prices) required to gain back market share is going to restrict PFG’s ability to claw back the 5.4% operating margin it lost in 1H17 (1H17 6.9% vs 1H16 12.3%),” says Buss.

Murison too is cautious. “The first half of the year has proven a tough one for Pioneer Foods and, while we are expecting a recovery in the second half of the year, it might be more modest than initially anticipated. The strong rand is likely to weigh on exports for the group, while maize cost relief may only start to be realised around Q4 of the group’s FY17.”

Buss says while the improved soft commodity procurement position will result in a significant improvement in results, Electus believes the share price is overvalued. “The volume/market shares losses and the negative impact on margins should the heightened level of competition descend into a price war.”

Says Rocchi: “The market is valuing the stock at 15x FY18 (more normalized earnings) – which I consider too rich for a cyclical food producer. The market is paying up for the magic that a quality CEO like Roux brings to the table, but ignoring the reality that the ‘perfect storms’ that have battered these results will occur from time to time. I’m not a buyer at these levels.”

A flat gross interim dividend of 105 cents per share was declared.