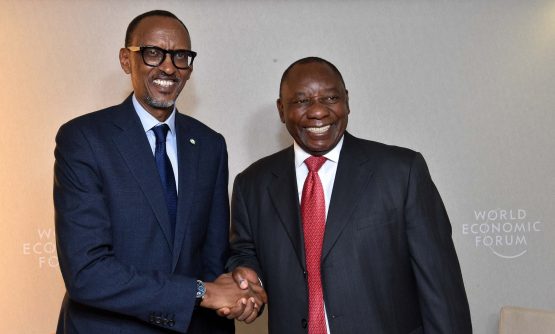 Tuesday saw a big day for the cleansing of Eskom. While former chief financial officer Anoj Singh was responding to questions about his mismanagement of state funds and ties to the Gupta family, another executive handed in his resignation. Prish Govender was the acting head of group capital at Eskom, and was implicated in the corruption scandal, alongside Singh, with Gupta-linked firm Trillian and McKinsey. His resignation comes without explanation.

The World Economic Forum kicked off on Tuesday in Davos, Switzerland. Deputy President Cyril Ramaphosa is heading the South African delegation. On Tuesday, Ramaphosa met with Rwandan president Paul Kagame and is pushing his agenda to get more investors into SA. Wednesday’s agenda will be structured around the themes of capitalism, emerging market-leadership, economic generation gaps and more.

The already-embattled retailer is still scrambling for funds after selling the company jet, letting go of shareholders and trying to pay off its debts to free funds. Bloomberg reported that the retailer obtained $1.1 billion in asset sales, but is still struggling to stabilise after its losses. Absa Bank, Investec and Sanlam were collectively owed over R1.2 billion by Steinhoff ex-CEO Markus Jooste’s Mayfair Speculators.

The CPI is a measure of the rate of change in the prices of goods and services purchased by consumers.

Ahead of the announcement on Wednesday, the rand continued its upward trend toward the R12 mark. It moved just above R12.04 to the dollar.

Lewis, African Media Entertainment (AME), Netcare and Clicks are to pay out dividends to shareholders on Wednesday.

Lewis stores reported a positive trading update on Tuesday, as sales were boosted and there was an improvement on debt collection. The share price increased almost 18%.