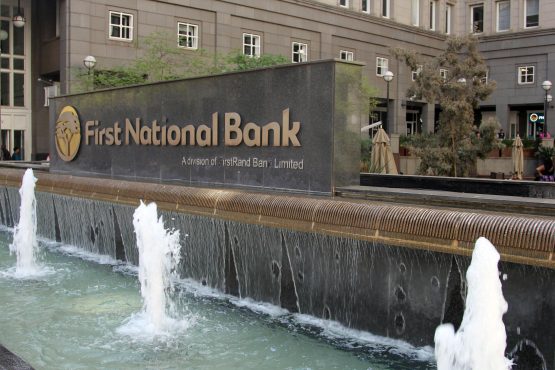 Despite the pandemic, the group has managed to declare its highest ever final dividend. Image: Moneyweb

FNB CEO Jacques Celliers says at this point, the bank expects its corporate staff will return to offices over time to a level where around 40% are on campus on any given day.

This is even lower than the 60% target Nedbank has set in its new hybrid working model.

Celliers says executives have been back almost full-time for some time and the rest of its staff are “slowly shifting back” to the office.

The group was among the first to embrace flexibility in working, with many staff at head office and its campuses able to work remotely up to 20% of the time. During lockdown and the pandemic, that obviously spiked towards 100%.

It is currently in a “spring phase” with employees starting to come in more regularly.

Celliers hints at a near-term future beyond one where each employee has their own cubicle. “We are not in the movie of rushing everyone back to the office just for the sake of doing so.”

He points to its offices in the Johannesburg CBD (Bank City) and Sandton (Merchant Place), not to mention Fairlands, which offer different perspectives to employees. He says they will be able to experience both remote/home and office environments and will be encouraged to do so – especially as they are starkly different.

He adds that getting the balance between in-person contact and remote working right is important, and that at this stage the bank is “not too sure where it lands”.

“It important that your operating model caters for that.”

Critical is how it is able to execute with the hybrid model, he explains. Arguably more important is “how we build our culture, especially with younger talent”.

Its space requirements – at branches and campuses – have “adjusted downwards” over the past number of years. Branches are a third of the size they used to be (250m2 to 350m2 from a historical level in excess of 1 000m2), even though the absolute number of branches has not reduced significantly. Celliers says the bank wants to roll out even more branches, given the convenience-focused strategy.

With its large campus facilities, there is “some ageing stock”, and some rentals it can and will continue to exit. The group reported an 11% drop in lease charges in the year to end June 2021, with property expenses down 1%.

It is astonishing that 18 months into a global pandemic, FirstRand has managed to report its highest ever level of six-month earnings in the second half and declare its highest final dividend ever.

The financial services group had previously “indicated that it expected to reach peak earnings during the 2023 financial year”.

“However, the speed, extent and breadth of the rebound has exceeded expectations and the resultant momentum has carried into the new financial year.”

Consequently, it says it “expects peak earnings to be achieved earlier than previously thought” – which means in the current financial year (2022).

This is a business firing on all cylinders, with the arguable exception of vehicle finance unit Wesbank.

Advances declined 3% in a market where vehicle sales remain below 2019 levels. New business was up only 2% on last year. Stock shortages and new model launches mean the pain is mostly being felt in the new car market.

The business has emerged from the pandemic in “good shape”. Revenue is up 4%, despite advances being 6% lower. Operating expenses were up 3%.

FNB Commercial has been the star performer, with profit before tax up 16% on 2019 (a 36% increase from last year’s Covid-19 impacted period).

In the retail space, the bank grew customers by 4% to 7.52 million (excluding eWallets not belonging to customers, which was up 9% to 5.61 million). Entry-level banking customers grew by 13% – not surprising given government support programmes such as the Covid-19 relief grants. In the private banking segment, it grew customers by 4%. Retail banking (middle market) customers declined by 1%.

All portfolios reported a lower impairment charge, with the group credit loss ratio excluding the UK business of 1.27 nearing 1.06 as at December 2019. Its Covid-19 relief book is performing better than expected. The impairment charge is 44% lower than last year.

Celliers says the pace of the rebound over the past year is “unbelievable” – when you look at the broader economy and country, and at corporates.

The bounceback was about a year quicker than the bank expected. “The banking sector has not become zombie banks. There is a lot of liquidity and capital available.”

But he says the last year has not just been about providing relief to customers. FNB reconfigured its value propositions and delivered a record number of projects.

The group has a strong balance sheet, and with vaccine momentum and stability in policy, “we think there could be a very strong year or two ahead”.

The group reported return on equity (ROE) of 18.4% in the year, back within its stated range of 18% to 22%. It expects ROE to remain in that range this year and “capital generation is likely to exceed demand in the 2022 financial year”.

I’m glad that I’m not a commercial landlord

When the US led economic collapse hits us like a ton of bricks, most probably in the next 12 months, the bounceback will end quicker than the bank expected.

They get NOTHING done. Does not work in SA. The whole lot is pathetic. No service.

Not even the complaints department works.

The fact that they are returning to work… definitely means Working from Home is NOT WORKING.

My connections on the inside at RMB said that their Internet Bill was taken cared of and they were supplied a UPS…. a small investment incurred… But I guess this cost versus renting a building and maintenance (electricity and water, cleaning, coffee, toilet paper, etc) is small.

So huge savings from disposing of buildings/ less rent / less maintenance… and shifting the cost to the Employee (Electricity, Cleaning, coffee/ toilet paper etc)… while the Employee saves on fuel … and stays at home….. HE ALSO PARTIES 24/7

Glad to see that some bosses are starting to see the light regarding pigeonhole cubicles. Not only are these 100% guaranteed to spread diseases, but there are few worse things in the workplace than being an involuntary party to all your colleagues’ phone conversations and the smell of their lunches.

Smart workers collaborate better with spontaneous interaction in person in offices. Every smart employer has realized this.
And stupid workers need supervision otherwise drift off into inefficiency and Facebook
If AI has already rendered 60% of current employees redundant then 40% can not return to the office without decimating value if the other 60% still get paid.
If FNB truly invest in this belief then there will either be further catastrophic decline in the economy or the journalist got the wrong end of the stick. Lets hope its the latter.

… then there is Crypto…. where we dont need a Bank…. signup for a wallet…. and Bingo… I can deposit and transfer anywhere I want to….

as we become more digital… Yes there will be decline in the economy. The days of Bank Employees are being numbered!

For lower level employees, yes. But you still need someone to read, analyze and interpret a balance sheet.

IF you at a BANK to read/analyse/interpret a balance sheet…. u seriously have to be wasting your time working there….. there must be better work to do.

Once a business and its products are well integrated into 1 system…the software should be able to produce 1 report…. u dont need so many people

The world’s employees have something else to consider. We never seem to think of the next shift…remote employees are going to enter the “career stalling” group of employees. So while your in-person buddies/co-workers rub shoulders with the boss/management, and have face-time, and you miss out on “corridor talk/informal meetings”….guess whose more likely to get those career promotions??

My prediction is, once the Covid pandemic is solidly behind us, and remote-employees start to realise they’d been losing out to in-person employees…..they’re return their asses back to the employer’s office. Don’t believe this “new norm work from home” nonsense…..ain’t going to last! It only applies to a small % with certain skills.

(….there’s many that will disagree with me, but it takes a few years’ time to pass by to start realising that your career has stalled, or certain in-office buddies has passed you by on the corporate ladder).
So yes, please give me a thumbs-down if you don’t like the truth, and if you prefer to have your career stalled.

Here’s a few international articles/views based on psychological research: