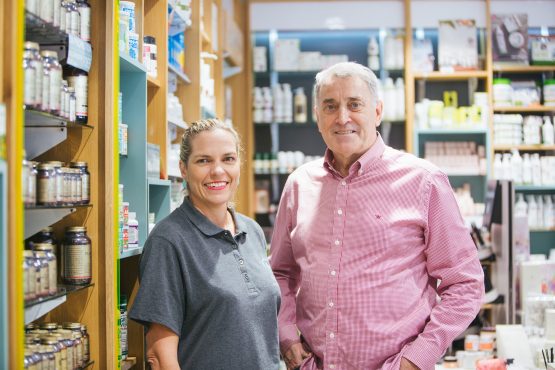 The booming health and wellness sector has caught the attention of Kevin Hedderwick, the former CEO of food franchise giant Famous Brands.

Hedderwick has acquired a strategic equity stake in Thrive, an innovative health and wellness retail brand based in KwaZulu-Natal and launched by pharmacist-turned-wellness entrepreneur Lynda Bryant.

Noted for taking Steers Holdings from a R65 million business in 2000 into the multi-billion-rand Famous Brands operation a decade later, Hedderwick has partnered with Bryant to grow Thrive into a niche health and wellness retail chain.

Since leaving Famous Brands in 2018, Hedderwick has been dabbling in a few businesses and consulting roles in his “semi-retirement”. He is also a “semigrant”, dividing his time between Johannesburg and his retirement home on the KwaZulu-Natal North Coast.

Speaking to Moneyweb about the new venture, Hedderwick says the health and wellness sector is thriving both in South Africa and globally, as people look for alternative ways to lead healthier lives.

“Besides the growth of corporate chains like Dis-Chem and Clicks in SA, there is an increasing number of niche health and wellness stores and offerings.… When I met Lynda Bryant by chance just over a year ago at her Thrive store in Kloof near Durban, I was impressed by what I saw and its community-centred approach,” he adds.

After some discussion over a few months, Hedderwick and Bryant decided to join forces to grow the Thrive brand into a niche chain that will initially target the KwaZulu-Natal market.

The group recently opened a second store at The Well Centre in Ballito, which is located near several medical facilities including Netcare’s Alberlito Hospital. As part of a first phase expansion, the business duo want to have three more stores opened by mid-2021.

Hedderwick did not want to reveal to Moneyweb how much in private equity he is investing in the new venture. However, he says he is involved in other start-ups as well as advising and consulting to both listed and unlisted companies on strategy and other areas of business.

“As part of my venture capital ambitions, I decided to invest in this exciting and emerging health and wellness company,” he adds.

“While I am semi-retired, spending my time mainly in Johannesburg and Ballito, I will still be playing a role in the growth of Thrive. The expansion will initially focus on KwaZulu-Natal, but we have already had enquiries to bring the brand to Gauteng,” Hedderwick notes.

Bryant says that having Hedderwick as her equity partner in the Thrive business is noteworthy, considering his business acumen and experience in corporate SA.

With some 14 years in the business after qualifying from Rhodes University as a pharmacist, Bryant has also proven her entrepreneurial mettle. In 2005, she bought a Link Pharmacy in Kloof, which she rebranded into Thrive in 2016 following feedback from the local community.

After rebranding the business, Bryant says it registered double-digit growth and today she employs some 30 people. The Kloof outlet won best community pharmacy in South Africa in 2013, and again in 2019 under the brand Thrive.

“Clients said they felt daunted by clinical corporate retail pharmacies and wanted more than the filling of yet another doctor’s script,” she says.

Since then she has added other health and wellness products to Thrive’s offering, including a collaboration with The Juice Kitchen, a local business that makes cold-pressed raw fruit and vegetable juices. Bryant says this collaboration will continue as an integral part of the national roll out of Thrive.

The new Thrive Ballito store focuses primarily on integrated wellness, stocking vitamins and supplements as well as natural, organic and locally sourced food, skincare, gifts and cleaning products. It includes The Juice Kitchen as a store within a store and offers a small clinic for a homeopath and nutritionist to visit on a weekly basis.

“People often feel they may be taking too much medicine and, with a significant increase in lifestyle diseases, want a more meaningful solution rather than yet another prescription. In Kloof, my team and I have created a place that marries health and wellness with traditional medicine and professional advice,” she explains.

Unlike its predecessor in Kloof, Thrive Ballito it is not yet home to a pharmacy, although there are plans to add one as soon as possible.

This is Amazing! Thank you for always supporting local Kevin. I pray all the readers on Moneyweb proudly support and buy local!

Remind me how much famous brands made?