‘To our knowledge, no other shareholders have expressed their opposition to the transaction’ – Balwin CEO.
By Roy Cokayne 26 Aug 2021  00:01 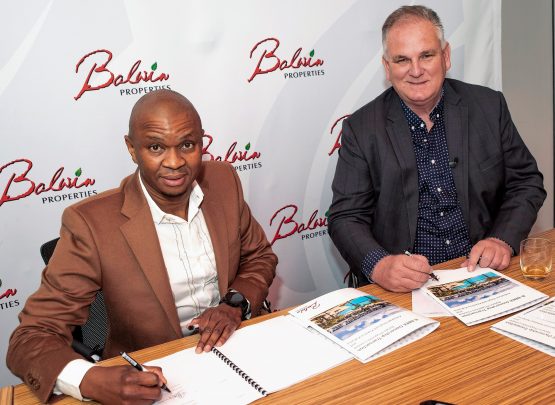 Aobakwe Kukama (left) with Balwin CEO Steve Brookes at the signing of the empowerment deal in Bedfordview on May 26. Image: Supplied

A fund manager and shareholder in Balwin Properties has appealed to all shareholders in the JSE-listed residential property developer to vote against a proposed black economic empowerment (BEE) transaction at next month’s general meeting.

“After numerous interactions with various other shareholders, it became apparent that they share similar concerns and opposition to the proposed transaction.

“Three of the resolutions to be voted on require at least 75% shareholder support to pass.

“At the 2020 AGM, shareholders expressed their opposition and voted against the ‘General Authority to Issue Shares for Cash’ with 21.3%.

“It is very likely that an opposition vote of >25% can be achieved and that this proposed transaction can be blocked,” he said.

Balwin CEO Steve Brookes said on Wednesday that Balwin is aware of the open letter by Van Niekerk and has engaged with him previously about his concerns.

“To our knowledge, no other shareholders have expressed their opposition to the transaction.

“The board has and still believes that transformation is an important imperative,” he said.

Brookes was cautious about commenting on the percentage of Balwin shareholders the company believes will be supporting the proposed transaction.

“We cannot comment on each shareholder’s respective vote, and we remain confident of shareholders supporting this empowerment initiative,” he said.

Commenting on Balwin’s plan of action if the proposed transaction is rejected by its shareholders, Brookes said: “We are always open to engagement on finding a pragmatic solution to ensure the company achieves its empowerment objectives.”

If the transaction is approved by Balwin shareholders at the general meeting on September 6, black shareholders will take up to 10% of the company’s issued share capital and boost Balwin’s empowerment credentials.

The proposed deal involves businessman Aobakwe Reginald Koketso Kukama, who will own 51% of a new BEE special purpose vehicle (SPV) that will be able to own up to a tenth of Balwin.

The balance of the 10% stake is expected to be taken up by a broader base of black shareholders, representing women and the youth.

Kukama is the founder of Yaetsho Investments & Projects, a project management and property asset management group that is also involved in renewable energy.

He is behind the Vaal River City Development in Gauteng and has worked with the Mia family – the landowners of the Waterfall mega development precinct – among other business interests.

Read: Meet the man behind the Vaal’s rejuvenation

When it announced the proposed transaction on May 26, Balwin said it will entail the setting up of the BEE SPV, which will be able to subscribe for 10% of the group’s issued share capital at a 20% discounted subscription price.

The discount will be applied to the 30-day volume weighted average price of Balwin’s shares on the JSE.

A representative of the SPV will also be included on Balwin’s board.

In the open letter, Van Niekerk said the subscription consideration will be vendor financed by Balwin, with a small nominal amount of R20 million contributed by the subscriber.

“Current shareholders are essentially vendor financing 10% for a new shareholder at a -20% discount,” he said.

Van Niekerk added that the BEE SPV will be locked in for 10 years, with Balwin retaining cession over the newly-issued shares as collateral for repayment of the vendor loan over the 10-year period.

“If the BEE SPV does not perform in terms of its obligations, Balwin will have to unwind the scheme at the cost of the current shareholders,” said Van Niekerk.

Van Niekerk further claimed that the proposed transaction will have limited positive impact, if any, on Balwin’s broad-based black economic empowerment (B-BBEE) rating because ownership, in terms of the B-BBEE scorecard, is measured against a target of 25% economic interest and voting rights to be held by black people and the proposed transaction will only result in about 10% ownership.

“Redirecting future cash flows will have a significant negative impact on the net present value of current shareholders’ ownership in the company,” he added.

Van Niekerk also believes the current Balwin share price and the price at which the new shares are proposed to be issued greatly undervalues Balwin.

“Issuing shares at the proposed price would constitute a value destructive capital allocation decision by the company,” he said.

Van Niekerk further highlighted that the market reaction to the proposed deal is evident from the share price movement after the announcement on May 26. Should shareholders succeed in opposing the transaction, it is possible the market will assess the company more positively and the share price might recover, he said.

Shares in Balwin rose 2.67% on Wednesday to close at R3.85. Balwin shares closed at R4.42 on May 25, the day before the empowerment transaction was announced.

Can’t understand why anyone would buy these garbage apartments. R1.5M for a small apartment with 3 units above you. Can hear you neiughbour flushing their toilet. What Blawins did to greenstone is criminal

I used to own an entry level 2 bedroom Balwin unit which was my first property. The flat while small was quite nice. Some of the tenants in the complex were a nightmare though. I sold it at a decent enough profit 5 years later. I am sure hundreds of people had the same “first step-on the property ladder” experience with them.

The jse needs to start recording the bee credentials of the pension funds and asset managers. The Pic and gepf, nor the investors of allan gray, coronation, are not all 100% white. Stop looking at the ownership of the asset manager, they are just custodians. Look at who’s capital it is.

Or, we could stop childishly worrying about race at all

We could only wish!

Balwin listed just as the economy tanked. They previously made their money selling nicer than usual 2 bedroom units in complexes just off main roads.

I would be concerned about saturation in that section of the market. The cancellation of the mega project in the Sandton CBD raised some alarm bells at the time.

It would be interesting to hear what their future vision is.

In the race to appease extortion & comply with preferential ANC elites most of Mr Van Niekerk’s concerns are speedily overlooked. Once explained in simple retail investor language who would vote for such a proposal. Oh wait the fund manager will cos it’s not their money.
Are advisory fees more lucrative than fund management fees..??

This looks like it may tank to R2 quickly.

The expropriation and destruction of property that lasted for a week during the Zuma riots caused irreparable harm to economic growth. The invasion of property under the BEE banner has lasted for 27 years now. That is why we have the highest unemployment rate and highest levels of inequality in the world.

Sounds more like a BOSASA deal. Never forget – Project Managers only add cost to a project and never add value!!!!

There are not many BEE that are value enhancing. They are value destructing by their nature.