Tesla’s dizzying surge through 2020 showcased an investor craze for snapping up shares of the company and not in buying its cars, David Einhorn‘s Greenlight Capital said in a letter to investors on Thursday.

“The fad is in owning Tesla stock,” according to the fund’s fourth-quarter letter seen by Bloomberg News. Tesla cars “are not a fad; if they were, Tesla would sell many more than it does,” the letter said.

Tesla shares were slightly lower to $846.90 Thursday after having surged more than 900% since the start of 2020. That compares to a 19% rise for the S&P 500. Greenlight’s portfolio was hammered by losses in betting against Elon Musk’s automaker throughout 2020 with the position marking its largest loser. 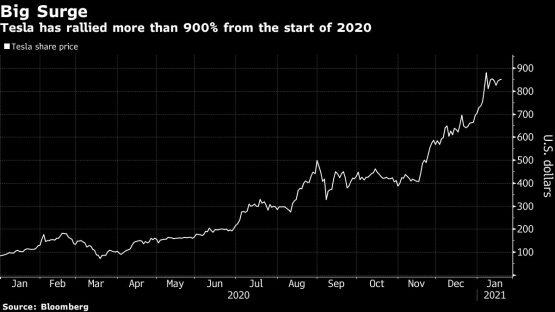 Greenlight calls out the stock’s rally and its more than $800 billion valuation as “silly,” highlighting that in the 2000 internet bubble Cisco Systems maxed out at 29 times revenue, which is a discount to Tesla’s current level.

As a result of the stock’s 2020 boom, Greenlight underwent efforts to “sidestep most of the significant second-half rally” for shares ahead of its inclusion in the S&P 500, the letter said.

Greenlight’s success through the final three months of 2020 — the fund returned 25% in the fourth-quarter — allowed it to net a 5.2% return for the year. That gain markedly lagged an 18% return for the broader S&P 500 over the year.

Other highlights from the letter:

Reiterated short call on Assured Guaranty Ltd. after the fund had discussions with the U.S. Securities and Exchange Commission. Shares of the company fell as much as 6% Thursday, the most since November 3. “As we said almost three years ago and will reiterate now, Einhorn’s analysis demonstrates a fundamental lack of understanding of our business model,” Robert Tucker, head of investor relations and communications, said in an emailed statement.

The fund touted investments in FuboTV and Danimer Scientific Inc. as bets that have realised notable gains since going public.
Greenlight didn’t initiate or close out any significant positions in the fourth-quarter and has net long exposure of 64%, which is “higher than it has been in some time.” The letter said the fund is positioned for higher inflation, rising interest rates, and a strong housing market.

I couldn’t justify owning Tesla at half its current price. Thank the pope that I didn’t have the guts to go short though. I would have been completely wiped out. Crazy crazy market. The market is always right though – until finally it isn’t.