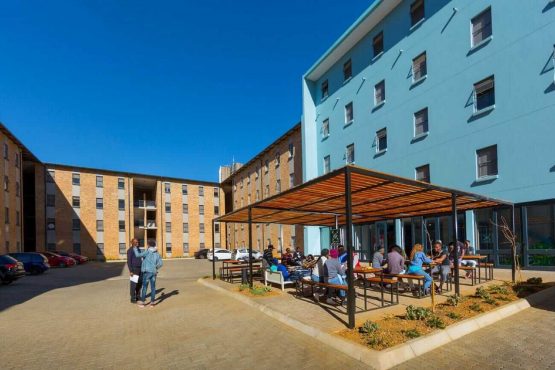 Growthpoint has just received Competition Commission approval to acquire its first three assets in the student accommodation sub-sector of the property market from Pretoria-based private developer Feenstra Group, for an undisclosed amount.

The deal is comparatively small considering Growthpoint has a market cap of R50 billion, a South African portfolio worth around R80 billion, and a total international investment portfolio in SA, Europe and Australia totalling some R150 billion. It also did not have to make a Sens announcement on the JSE about the deal.

However, the move into student accommodation is something to watch, as Growthpoint plans to grow its “funds management model”.

Speaking to Moneyweb, Growthpoint SA CEO Estienne de Klerk says the new student accommodation fund represents a “very exciting” development for the group and is set to be officially launched to market in October.

He reveals that this fund will “start off with assets of R2 billion”.

While De Klerk did not disclose the value of the deal with Feenstra, his comment around the planned initial size of the fund means that Growthpoint has either secured or is eyeing further acquisitions in the student accommodation space.

“This transaction [with Feenstra Group] is the commencement of our purpose-built Student Accommodation Fund,” he says.

“We already have indicative equity funding commitments from third-party investors, plus those from Feenstra Group and Growthpoint Properties.”

De Klerk did not reveal further details. However, Growthpoint is set to release its annual results next Wednesday (September 15) and is likely to highlight the group’s expansion into student accommodation.

However, this got somewhat lost in the group’s hefty results announcement, considering the scale of its overall business, which includes a 50% stake in Cape Town’s V&A Waterfront and a growing offshore exposure of more than R70 billion.

“Our funds management model is a core strategy. The co-investment and co-management model are effective and particularly attractive in this market,” Sasse said at the time.

He explained that Growthpoint’s “capital-light” funds management strategy allows it to access third party capital and leverage its management strength in the unlisted and co-invested environment.

The group’s healthcare fund and joint-venture Lango fund (targeting investment in the rest of Africa) had assets totalling R2.7 billion and $638 million respectively at the half-year.

“Growthpoint continued building its first two funds and plans to launch a third fund invested in purpose-built student residential accommodation. During the half-year [to December 2020], this strategic focus earned Growthpoint R16.3 million in asset management fees and distributions of R62.2 million from the hospital fund,” the group noted in its interim results media statement.

Read: Student accommodation: Is it a rip off?

One of the investors in both the healthcare fund and Africa fund is the International Finance Corporation (IFC), which is a member of the World Bank Group.

Worth noting is that the IFC has highlighted student accommodation as one of the sectors of the property market in Africa that needs investment.

Growthpoint will no doubt be looking to draw further investments from the IFC into its new student accommodation fund.

He did not reveal the value of the transaction, but noted that the deal represented around half of Feenstra Group’s overall student accommodation portfolio.

“We are [also] a substantial investor in the fund [Growthpoint’s student accommodation fund]. Feenstra Group will develop more properties for the fund in future. We will also be the property managers to the fund,” Feenstra added.

Feenstra Group was one of the early private investors and developers in the more formalised student accommodation property market in South Africa, and also has investments in the residential and commercial property sectors.

In fact, it was the joint-venture partner with JSE-listed Emira Properties, involved in the R210 million office-to-residential conversion of an Emira property in Rosebank, dubbed The Bolton.

Commenting broadly on the move and the student accommodation sector, Craig Smith head of research at Anchor Stockbrokers, tells Moneyweb that globally there is “lots of activity and interest in the student housing segment”.

“Clearly, there is a massive deficit in terms of availability of decent or better-quality student accommodation in South Africa as well as globally…

“So, certainly a shortfall in SA but the challenge will be to supply the product at lower price points where there is likely to be a big market,” he says.

“Obviously, limited or lower travel doesn’t help as student accommodation around universities in SA is also supported by foreign [especially African] students. Then, another uncertainty is the degree to which online education limits the need for accommodation close to physical campuses, or potentially how it changes locational demand,” Smith however points out.

“But it is fantastic that a player like Growthpoint is investing in ‘social infrastructure’ in SA… There is a need, in my opinion, for more South African companies to invest locally as this also has the potential to catalyze growth and improve business confidence,” he adds.

Doesn’t make sense unless the yield on these assets is >12%. With GRT trading at a big discount, management should buy back shares rather than continue empire building

Same in my experience – cheap accommodation lasted even beyond Varsity.
I thought this was the norm – until I heard how rich farmers who sent their kids to US and Tuks would ride into town and simply outbid each other to buy an apartment for the poor old son/daughter who must live comfortable!!
Not sure if these kids actually made it in life – on their own.

Feel free to rent out one of your rooms to some rural kid for feel-good-points. But you won’t.

I agree. Growthpoint should stay out of this. I would not buy shares in a company that let out student accommodation.

Are you going to provide non profit student accommodation then? Or naaah?

Must be nice in that armchair. Condemning those who provide a needed service but not doing it yourself.

Most SA students depend on NSFAS funding for accommodation.
Growthpoint needs to presume that NSFAS won’t go bankrupt for next 20-50 years to maintain project viability.

Growthpoint needs to build student accommodation for Stadio and Advtech private university campuses and in Sibaya the New university node!