Announcement imminent as it emerges as the suitor of Hyprop and Attacq’s retail properties in Ghana and Zambia.
By Suren Naidoo 27 Jun 2019  00:27 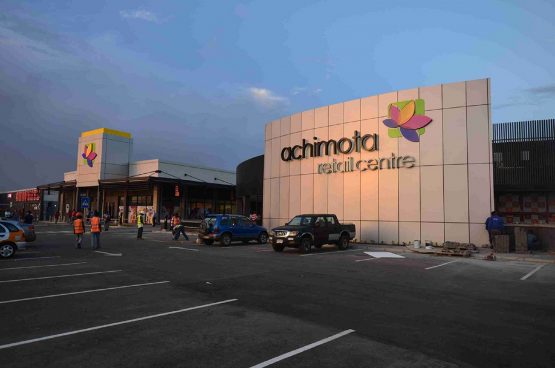 ‘Deals take time’, but it looks like Growthpoint Investec African Properties is about to acquire two of the five properties in the AttAfrica portfolio, which includes the Achimota Retail Centre in Accra, Ghana. Image: Supplied

Growthpoint and Investec Asset Management announced their pan-African real estate investment joint venture backed by the World Bank’s International Finance Corporation investment arm more than three-and-a-half years ago. Its first deals have now been secured and are about to be revealed.

The venture, dubbed Growthpoint Investec African Properties (Giap), has emerged as the suitor of AttAfrica’s retail properties in Ghana and Zambia, which are jointly owned by JSE-listed real estate investment trusts (Reits) Hyprop and Attacq, together with other minority shareholders.

Growthpoint Properties SA CEO Estienne de Klerk confirmed to Moneyweb on the sidelines of the South African Property Owners Association (Sapoa) Convention in Cape Town last week that the first two deals as part of Giap have been secured. He stopped short of mentioning the properties and investment destinations, but industry insiders have confirmed to Moneyweb that the properties are from the AttAfrica portfolio of five retail centres.

De Klerk referred Moneyweb to Giap’s London-based managing director Thomas Reilly. However, Reilly was loath to comment this week, only saying “you’ve managed to catch us at an interim point in time in terms of the transactions that we’re busy with, and to be honest I’m somewhat limited in terms of what I’m able to disclose”.

Good time to buy – rather than sell – in Africa

During a panel discussion at the Sapoa Convention, De Klerk cited Growthpoint’s funds management business (Giap) as a “counter-cyclical” move in Africa, adding that “it’s a better time to buy [properties] in the rest of Africa than to sell”. In an interview with Moneyweb later, he said Giap raised $212 million in the “first close” a year ago, which included $50 million from Growthpoint. He added that the target was now to raise around $600 million for investing in commercial properties in the rest of Africa (outside SA). With the first two deals concluded, he said more property deals were due to be finalised this year.

Asked why it had taken so long to secure properties, De Klerk said: “The issue is that deals take time. We had to first raise the money together with other institutional investors. It has also been hard to secure deals in Africa, but we believe the timing is now right to get better deals.”

De Klerk’s comments were telling, considering that AttAfrica’s main shareholders Hyprop and Attacq have been looking to sell.

The valuations on the properties within the AttAfrica portfolio have declined since Hyprop and Attacq purchased stakes a few years ago. The impact could be seen in the latest results of both companies, with impairment costs between the two Reits reaching over a billion rand. Hyprop declined to comment this week, while Attacq is in a “closed period” ahead of its results announcement set for September.

Contacted for comment, Atterbury Southern Africa CEO Armond Boshoff noted: “Atterbury is not a shareholder of AttAfrica. Atterbury has a management agreement with Hyprop and Attacq to manage the assets of AttAfrica.”

He confirmed to Moneyweb: “Hyprop, Attacq and certain minority shareholders have reached agreement to sell two of the five AttAfrica assets. The sellers are not at liberty to disclose the buyer. There is interest in the remaining assets, but no legal agreements have been signed.”

Asked who the minority shareholders in AttAfrica are, Boshoff said he could not comment.

“We have two assets in Namibia – The Grove Mall of Namibia in Windhoek and Dunes Mall in Walvis Bay – and a stake in a listed property fund in Mauritius, Ascencia,” he says. “Otherwise, we are not pursuing any other opportunities in Africa. For now, we are focusing on South Africa, Namibia and Mauritius, with our partners.”

Reitway Global portfolio manager Garreth Elston said as far back as 2015 that Hyprop and Attacq had overpaid for the AttAfrica properties.

Asked for comment on Giap’s move on the retail properties, he said: “I haven’t heard anything specific. However, if they could get the assets cheaply enough it could be a good opportunistic purchase. Hyprop totally overpaid for those assets. Pretty much everyone overpaid.”

Aren’t Investec already in the property business with a major holding in Tongaat – oh sorry, I forgot, they sold out well before the collapse of the Tongaat share! Or did they? Very confusing.