Pam Golding Properties, which has been appointed by Growthpoint to handle apartment sales, said on Monday that over 60% of the development has been sold.

Sales in the 63-unit development only launched publicly at the beginning of February.

Dubbed Kent, the development is Growthpoint’s first residential property venture in KwaZulu-Natal and forms part of bigger development plans the group has in store for La Lucia Mall.

Growthpoint, South Africa’s largest listed property counter, is looking to turn the mall into a mixed-use property that will include apartments and office space.

The move is aimed at boosting the number of shoppers to the mall, enhancing its sustainability and creating a mini live-work-play environment.

La Lucia Mall, built in 1974, has managed to maintain its upmarket status despite major new retail developments in nearby Umhlanga, such as Old Mutual’s super-regional Gateway Theatre of Shopping (opened in 2001) and Investec’s Cornubia Mall, which opened in 2017.

“The mall is Growthpoint’s most valuable retail asset in the province, worth more than R1 billion,” Greg Worst, Growthpoint’s regional head for KwaZulu-Natal, tells Moneyweb.

“As part of the bigger development plan, a significant R70 million refurbishment of La Lucia Mall itself was completed last year.” 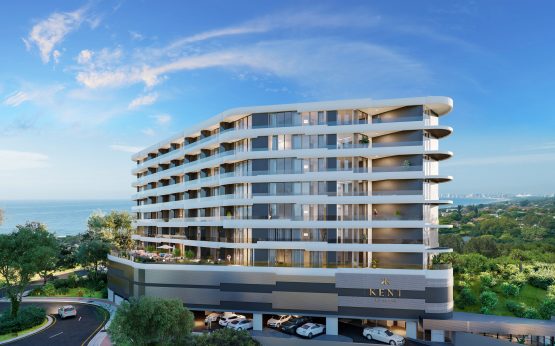 “We are investing in the order of R142 million in the new Kent residential development at the mall and have plans for an office block there. However, the office component is not being developed just yet considering the economy and state of the office market at the moment,” he adds.

Moneyweb broke news of Growthpoint’s Sandton Summit mixed-use precinct development in August 2019, which will include high-rise residential offerings. However, the overall Sandton Summit development is yet to be launched and has likely been put on the back burner due to Covid-19 and the office property glut in the node.

Commenting further on the La Lucia development, De Klerk says: “Growthpoint continuously considers various alternatives to optimise value for all our assets and each portion of vacant developable land. Our internal development capability also allows us to be versatile and market responsive.”

According to Worst, the mall property currently has development rights totalling just over 60 000m². However, only around 41 485m² is developed, which means that there is “substantial undeveloped bulk” on the site that can be used for new developments.

“The prime location and surrounding suburbs lend itself to an upper-end residential development … An in-depth market study highlighted the shortage in residential properties in the La Lucia area,” he says.

“Growthpoint planned to only go ahead with the development once 65% of the apartments are sold. It’s great to have already achieved sales of over 60%, but we anticipated this kind of demand for the Kent residential project,” he adds.

Gareth Bailey, a Durban Coastal area principal for Pam Golding Properties, also says he isn’t surprised by the number of Kent sales concluded, considering its location in the heart of upmarket La Lucia.

“Given the unavailability of land in this area, there simply isn’t any new stock like this,” he points out.

The development has one and two-bedroom apartments ranging from 51m² to 99m² in size. All upper floor units have a balcony with sea views, while ground-floor units have gardens.

According to Bailey, the Kent development is also situated directly across the road from a public park, which will be maintained and secured by Growthpoint.

Besides La Lucia Mall, it is located close to major office nodes such as La Lucia Ridge and Umhlanga Ridge, which is home to corporates like Unilever, Aspen Pharmacare, Illovo Sugar, SA Homeloans, Derivco and the big accounting and law firms.

While there has been some opposition from local residents towards Growthpoint’s development of the higher rise apartment block adjacent to La Lucia Mall, the project has received development approval from the eThekwini Municipality.

Construction is anticipated to commence later this year, with completion of the development expected by September 2022.

lived for years in la lucia area, all i can say from the artists impression, is that the current owners of the surrounding simplex and duplex units will not be impressed by the limitation / obstruction of their current sea views if it is still a strong point for selling / valuation of their properties as in the past.

When the residents objected to the development ( infrastructure will not cope and there is plenty of space for development in adjacent Umhlanga Ridge) the municipality with drew the notices due to some so called technicality, voided all objections and gave extremely short notice of intention to proceed. The whole issue stinks quite frankly

If they allowed Airbnb It would be more attractive. They charge a high price but reduce the earnings potential for residents.