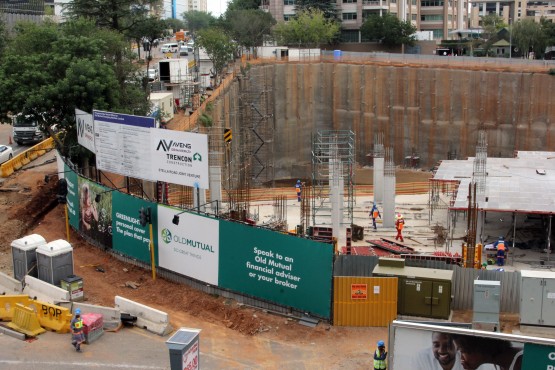 Aton has accused M&R of moving backwards strategically by wanting to re-enter the construction industry through Aveng. Picture: Moneyweb

Murray & Roberts’s unwelcome suitor, the German investment group Aton, has seemingly opened up a new front in its battle to take over the South African engineering and resource group on its own terms by acquiring more than 25% of M&R’s takeover target Aveng.

Aton, which holds about 44% in M&R, has been very outspoken in its opposition to M&R’s plans to acquire all the shares in the struggling Aveng. It failed to stop the transaction when it was outvoted by minority shareholders at an M&R shareholder meeting in June.

It seems Aton might have decided to try to fight M&R’s Aveng acquisition from inside Aveng, since its shareholders will have to approve the transaction once M&R makes a firm offer.

Aton did not respond to a request for comment on Friday.

A source close to the transaction told Moneyweb that Aveng would need 75% shareholder approval to proceed with the M&R transaction, and that holding more than 25% of the shares could therefore put Aton in a strong position to block the takeover.

Aton did not respond when Moneyweb asked it to confirm this.

M&R has made it clear that it is interested in Aveng’s Australian business McConnell Dowell and its local open cast mining business Moolmans. It declared its intention to delist Aveng should the takeover succeed. It also supports Aveng’s plans to sell its “non-core” assets, including the struggling local construction business Grinaker-LTA, Trident Steel and its manufacturing assets.

Aton has slammed the proposed M&R/Aveng deal as a move by the M&R board and management to frustrate Aton’s advances. It accused M&R of moving backwards strategically, by re-entering the construction industry through Aveng, after it earlier purposefully left the industry when it sold its own construction business.

Aton expressed its doubts that M&R would succeed in selling Aveng’s non-core assets, since Aveng itself has been battling to find willing buyers.

M&R however denied that it is trying to frustrate Aton’s advances, saying that its valuation of the non-core assets differs from that of Aveng and that it does not expect any problems with the sale of Aveng Grinaker-LTA and the other identified assets.

If Aton succeeds in blocking the M&R/Aveng transaction, questions would remain about Aveng’s future.

In the six months ended December 31, Aveng reported a loss per share of 87.4c and headline loss per share of 84.4c. Other than its Australasia and Asia construction and engineering business, and Aveng Mining, all other segments of the group operated at a loss. Aveng embarked on a comprehensive strategy to reshape itself and said at the release of its interim results in February: “The business has reached a critical juncture and requires decisive action to create a sustainable future.”

Aveng’s share price opened at a mere 9c on Friday, down more than 93% from the level of R1.10 three months ago.

After the news of the Aton acquisition on Friday, the Aveng share price jumped to 12c and eventually closed at 11c.

A week ago Aveng announced that it had managed to raise almost R500 million in a rights offer. This might have been the mechanism Aton used to obtain its 25% stake.

The proceeds of the rights offer will partly be used to redeem some of Aveng’s convertible bonds early.

In terms of an indicative timetable Aveng published earlier, M&R was expected to make a firm offer after the completion of the Aveng rights offer. This is also dependent on the results of a due diligence.

Aton, on its part, is essentially interested in M&R’s mining business and has stated its intention to delist the South African group if it gains control.