Hyprop falls to a new low, with its share price sliding to the lowest level in over five years.
By Suren Naidoo 6 Sep 2019  00:01 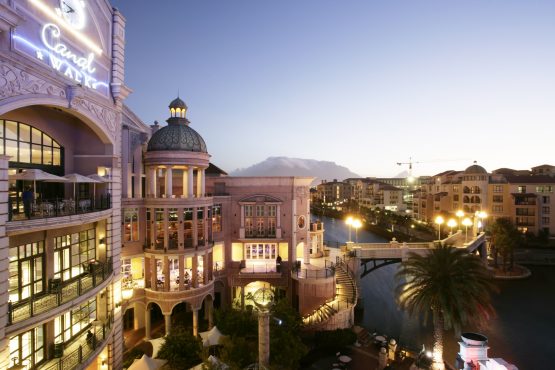 Hyprop's flagship Canal Walk super-regional shopping centre in Cape Town. Hyprop is set to focus on its SA and Eastern European property assets, while exiting from Ghana and Nigeria as part of a turnaround. Picture: Supplied

It was a tale of two property funds delivering a very different set of 2019 full-year results on Thursday.

Hyprop and Fairvest operate at opposite ends of the retail property spectrum. However with both bringing out results on the same day, industry players could not help but compare the two.

Once the darling of SA’s listed retail property sector, Hyprop fell to a new low with its share price sliding almost 11% to below R60 – the lowest level in more than five years. This came as the group reported its first decline in full-year distribution, with distribution per share (dps) down 1.5% – well below its forecast of around 2% growth.

Hyprop’s underperforming sub-Saharan Africa portfolio (excluding SA) was largely blamed for the decline in distribution. The group suffered a R1.45 billion impairment on the portfolio following devaluations on the properties. Hyprop, which owns a high-profile R51 billion portfolio, that includes malls like Canal Walk in Cape Town and Rosebank Mall in Joburg, declared a dividend of 745 cents per share for the year to June 30.

Fairvest, which has a R3.16 billion portfolio and operates in the lower LSM and rural retail property market, delivered annual distribution growth of 8.1%. It declared a dividend of 21.773 cents per share. Macassar Centre – one of Fairvest’s retail properties near Somerset West in the Western Cape. Picture: Supplied

Despite its size, Fairvest has been one of the best-performing property stocks in SA, delivering inflation-beating dividend growth for more than six years. Its market-beating returns for the full-year to June 30, saw Fairvest’s share price go up almost 4% on Thursday, following the release of its results.

Ian Anderson, chief investment officer at Bridge Fund Managers, says Hyprop’s results are “disappointing” considering that both Fairvest and Hyprop were delivering double-digit growth just a couple of years ago. “While they are different funds targeting different retail markets, Hyprop seems to have made the wrong move investing in sub-Saharan Africa. It overpaid for malls in Ghana and Nigeria, which has since seen significant writedowns in property values.

“This has played a big part in Hyprop’s recent poor performance, because its SA and Eastern European portfolios have performed comparatively well…. Meanwhile, Fairvest has delivered a very credible performance with above-inflation distribution growth and forecasts of between 4% to 6% growth next year.”

Anderson says Hyprop’s anticipation of a double-digit decline in distribution next year is a concern and is likely the reason behind its share price slide following the release of its results.

Speaking to Moneyweb following the group’s results presentation on Thursday, Hyprop CEO Morné Wilken said market changes had contributed to the fund’s negative performance. “Our performance is not what it used to be, but it is a fair reflection of where the market is currently, especially with regards to our sub-Saharan Africa assets.” He says since he became CEO in January, Hyprop has taken “some hard decisions” and is now exiting from its poor-performing sub-Saharan Africa portfolio.

“We have already sold two assets and plan to finalise the sale of our remaining assets in Ghana and Nigeria within the next year or so…. Essentially, it is going to be short-term pain for long-term gain. Hyprop has a revised strategy and key initiatives in play that should ensure that the decline in distributions is temporary. We anticipate a return to growth in distributions from our 2021 financial year onwards.”

Wilken says despite harsh market conditions in SA, distributable income for the year rose 6.5% within its local portfolio, while distributable income from its property portfolio in Eastern Europe was up 13%. “Our focus is going to be on strengthening our strong retail assets in both these markets, while managing our exit from the sub-Saharan Africa portfolio.”

Meanwhile, Fairvest CEO Darren Wilder tells Moneyweb he is confident that the group will achieve inflation-beating distribution growth next year. “It’s not spectacular, but in light of the tough SA economic environment, we have lowered our guidance for next year. Distribution growth of 4% to 6% for Fairvest is achievable and will be at least in-line with inflation.”

Commenting on Fairvest, Anderson says the group’s forecast for next year is still likely to be better than most of its listed property peers in SA.