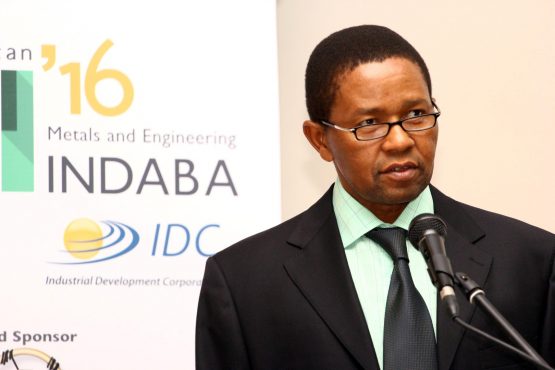 IDC CEO Geoffrey Qhena. The IDC says its decision to invest in Oakbay Resources was based on false information and it now wants to give back its 28.5 million Oakbay shares. Picture: Moneyweb

South Africa’s Industrial Development Corporation is suing four companies linked to the politically connected Gupta family after they failed to repay a loan that the state-owned development financier canceled because it suspected illegal activity.

The Guptas’ Oakbay Resources and Energy, Oakbay Investments, Action Investments and Shiva Uranium owe the IDC R287.5 million ($21 million) in principal and interest and are also liable for the institution’s legal costs, the Johannesburg-based development finance institution said in court documents stamped November 30. The amount is made up of R37.5 million of the outstanding loan and the rest is interest, according to the IDC.

The IDC canceled its original R250 million loan agreement, signed more than seven years ago, on November 10 after it said the Gupta companies breached the pact by possibly being involved in fraud. Ronica Ragavan, a director of Oakbay Resources, declined to comment on the IDC court case when called on Tuesday and referred queries to an Oakbay email account. There was no immediate response to emailed questions.

The family’s firms have also been in court this year to try to stop India’s Bank of Baroda from closing their South African accounts. The facilities are all the Guptas have left after lenders operating in the country terminated relationships with the family in 2016, citing concerns about alleged money laundering. The Guptas, who are friends of President Jacob Zuma and in business with one of his sons, have denied wrongdoing.

“We have to take allegations of fraud very seriously and pursue the recovery of public monies vigorously and using all legally available means to do so,” economic development minister Ebrahim Patel said about the IDC’s battle with Oakbay at the end of last month.

The IDC ended up owning shares in Oakbay Resources because the financier agreed to restructure the terms of its loan and take on equity as payment. Oakbay first started trading at R10.08 a share in November 2014, giving it a market value of more than R8 billion. The stock delisted in July this year at R5.80 a share following the resignation of its auditors and listing sponsors.

The IDC was persuaded to invest in Oakbay off what appears to be false statements and manipulation of the company’s share price, it said. The IDC now wants to give back its 28.5 million Oakbay shares.

South Africa’s Financial Services Board is probing share movements from when Oakbay listed in 2014 through April 2015 to determine whether the price was manipulated, it said December 6. The Guptas lent money to a Singapore firm ahead of the listing to be used to trade the equities and help set the price, according to a trove of documents seen by Bloomberg.

Did the IDC use taxpayer money to buy shares? since when does a government institution (Except the PIC) invest on the JSE?

How would it look if SAPS/Eskom/SABS/Sanra/PetroSA or municipalities invest on the JSE? (okay they are already mostly bankrupt anyway …)

Were they that stupid? really? difficult to believe

The top management of the IDC should either be fired or sued for the R300 Million of Tax payer money lost.

The IDC is farting against the wind unless they have tangible collateral security not worthless shares.

The IDC will have to get in line. The Gupta’s first priority is to pay one (or more) Zuma plus SOE board members for services rendered.