It will feature hologram tour guides, conference rooms that adjust temperatures based on attendance and alerts for the best parking spots before commuters arrive.
31 Aug 2016  12:47 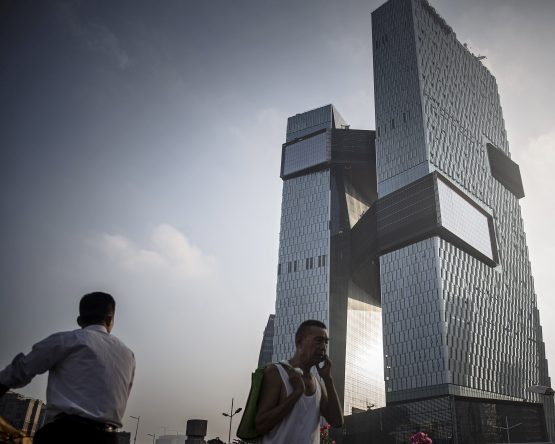 Just across the border from Hong Kong in southern China, two gleaming towers of glass and steel are rising in a city long known for its manufacturing prowess. This is the new headquarters for Tencent Holdings Ltd., a $599 million project aimed at creating a campus-like atmosphere for the urban setting.

One 50-story tower is connected by skybridges to a shorter one, making them look like giant robots in a lover’s embrace. Scheduled for completion next year, the Shenzhen skyscraper could become one of the largest labs for new internet services and connected devices. It will feature hologram tour guides, conference rooms that adjust temperatures based on attendance and alerts for the best parking spots before commuters arrive. Asia’s biggest internet company is using the building to beta test its platform for the so-called Internet of Things.”

In China today, there has never been smart architecture of this scale,” Ivan Wan, general manager and chief architect of Tencent, said in his first interview on the project. “Using our building as a massive testing field for the next generation of smart devices and technology is what makes this project iconic.”

Tencent isn’t the first tech giant to use its headquarters to make a statement. In California, Apple Inc. enlisted Norman Foster for its spaceship building in Cupertino while Facebook Inc. hired Frank Gehry to expand its base in Menlo Park.The design for Tencent’s building came from NBBJ, a firm with a very long list of clients from the tech world, including Amazon.com Inc., Google, Samsung Electronics Co. and the finance affiliate of Tencent’s archrival Alibaba Group Holding Ltd.

With the second tower reaching 39 stories, Tencent’s new building covers 340,000 square meters in the Binhai district, about a mile from the company’s existing headquarters.

The multi-story connecting bridges, which intersect at floors 1,  21 and 34, aren’t just visual elements to link the two buildings. They also house most of the common areas like pantries, auditoriums, conference rooms, the exhibition center as well as facilitating a 300-meter running track through both buildings.

There are also rooftop gardens, a swimming pool and rock climbing centre, as well as multiple hotel-standard canteens and meditation rooms dispersed throughout the two buildings.“They wanted to energise and drive more communication among their employees,” said Jonathan Ward, design partner at NBBJ. “They wanted something to be iconic, but they didn’t want something that was frivolous. Not loud for the sake of being loud.”

Tencent emerged as a technological behemoth on the strength of WeChat, the instant messaging service that’s also a social network, payments platform, food delivery service and dozens of others functions in one. While the Chinese company drew on all its businesses in designing the building, it still features the personal imprint of founder Ma Huateng, who chose the ergonomic chairs to be used when construction is complete.

Wan’s team is trying to take the integration with Tencent’s technology to a new level. Badges are able track anyone in the twin towers (down to the exact room) and doors will open with facial recognition. Those parking instructions will come in through WeChat, which will also select the floor for the elevator.“It’s a great strategy of getting in the head of your users to see if the product is fit for the market,” said Nir Eyal, author of “Hooked,” which focuses on how to build habit forming products based on psychology. “It’s eating your own dog food.”

Wan began planning for the new building back in 2010, a year after its existing headquarters opened to house a then workforce of 15,000, a number that has since doubled. Founded by a group of self-confessed geek college classmates in 1998, Tencent began by creating the QQ instant messaging service.

Combined with its cartoon mascot, a winking, scarf-wearing penguin, and also WeChat, the company is one of the most recognised brands in the country and has a market value of about $250 billion, even if those outside China are still getting to know it.NBBJ’s design beat out six others, winning the support of a project committee that included management, staff and specialists. All levels of the company took part in the development, including Chairman Ma.

“Pony was involved in the design process very often,” said Ward, referring to Ma’s English name. “He’s low key. Not your typical bombastic chairman of a big company. He knows what he’s doing. He doesn’t have to be loud about it.”That doesn’t mean Ma is an easy boss. The 44-year-old who currently ranks as China’s third richest man with a net worth of $21.9 billion, has a habit of challenging his subordinates to keep them on the edge. After patiently hearing out his employees, Ma will often come up with tough questions. In time, this has become part of what Wan calls the Tencent “PK culture,” referring to a gaming term for combat.“You never know where the questions are coming from, so you have to think about every aspect before you talk to him,” said Wan. “It encourages the staff to be the best of themselves.”

Ma challenged Wan and his team to include environmentally-friendly initiatives.With more than a billion combined users of WeChat and QQ, Tencent has a massive investment in computer servers. The heat generated will actually be recycled to provide hot water for the pool, kitchens and bathrooms of the new building. The ventilation system recycles indoor air to cool down any incoming breeze and save energy while live data feeds will boost the ability to monitor water and electricity usage. The initiatives are designed to generate annual savings of about 6.85 million yuan a year.

Wan expects that the experience his team gains from this project — from procurement of bathroom facilities to the green initiative designs — can become standardised guidelines for the company’s other construction projects. New buildings are planned for Guangzhou, where WeChat is based, as well as Beijing and Chengdu. It could also become a service for other companies or cities in China that aspire to similar initiatives, said Wan.By June next year when staff are fully set up in the building, Wan will know if Tencent has pulled off its ambition.“That’s when real action starts, because by then we’ll know if all these new smart products we created will work,” said Wan.