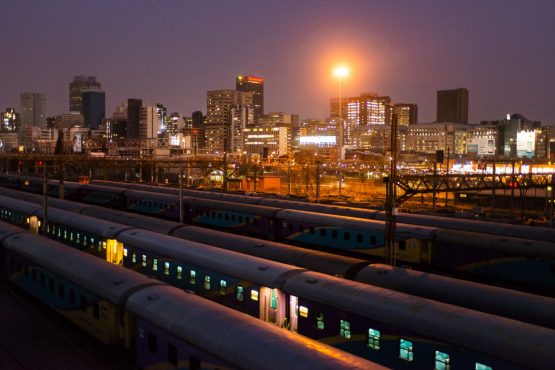 International investors in the rail sector in South Africa have threatened to disinvest from the country because of “the mess” at the Passenger Rail Agency of South Africa (Prasa).

Transport Minister Fikile Mbalula said on Friday that captains of industry in the rails sector have raised issues with him and told him “we are closing shop”.

“We are packing up and going – and these are top companies, international investors threatening to leave. Why? Because Prasa is just a mess,” he said on the sidelines of a briefing on the state of transport entities in Johannesburg.

Apart from the failure of Prasa to issue contracts related to its modernisation programme and other programmes, Mbalula highlighted other problems at the agency, including successive adverse audits from the Auditor-General, irregular and wasteful expenditure, non-functioning rail lines and stations, non-payments to service providers and problems with Prasa’s board and executive management team in implementing its strategy.

Read:
Prasa has shown itself to be the ultimate gravy train
CompCom prosecutes Prasa for abuse of power
Prasa – further explosive revelations at Zondo Commission
Mending Prasa will be a long haul

“These are companies with huge capacity and they are huge investments into South Africa,” he said.

Mbalula said companies are also not paid on time. “I’ve got a lot of complaints. Lots. People who got contracts, they were given jobs, they rendered services at Prasa but have not been paid.

“How will you sustain a company if you are in the rail sector and they are not paying you for your services? These are some of the challenges we need to address at Prasa,” he said.

Mbalula stressed that these international investors have not given the government any ultimatum or deadline to issue contracts.

“We have addressed that and the issuing of those contracts will be happening very soon. That is what we have been promised by Prasa, so that matter is actually addressed,” he said.

“The general overhaul programme, aimed at maintaining the current trains, has experienced long delays over time due to procurement delays.

“However the procurement process for this programme is nearing finalisation.

“This will contribute significantly in stimulating local job creation in the sector and achieving quicker turnaround times in returning damaged coaches to service,” he said.

Mbalula added that Prasa must bring contracts “back to life and show that Gibela is not shutting down”.

This is a reference to the Gibela Rail Transport Consortium, a black economic empowerment company formed in 2013 by French rail company Alstom and South Africa’s Ubumbano Rail.

Gibela was awarded a R51 billion contract by the South African government to manufacture 600 trains for Prasa, with the scope of the contract including train maintenance, technical support and the manufacture and supply of spare parts.

Mbalula said if Gibela shuts down now “it’s the biggest scandal of this country and I can see all the signs are there”.

He stressed that Prasa has management and a board “and we have got human beings who are employed to do this work”.

“I put plans in place, those plans must be implemented. We need the trains back. People are suffering,” he said.

Mbalula stressed that Prasa now has the support of cabinet and the minister and “must move, changes must happen”.

“At Prasa you have got ghost workers, people who are unqualified and are in the system and they are not doing anything about that.

“Things have just slowed down. We have got plans … modernisation that is supposed to be implemented.

“We have billions of rand we can’t spend because we are not building capacity at Prasa,” he said.

Mbalula added that there are also no consequences at Prasa for poor work. He referred to a R2 billion station modernisation contract that was processed by Prasa officials and the board and sent to him to sign, but which he had to return because it contained irregularities.

Mbalula said he expects Prasa lines – such as the Tembisa line in Gauteng, a lot of rail corridors in Soweto, and lines in Mabopane and the Central line – to be back in operation by the middle of next year.

“We need to get going. We’ve got the money, we’ve got the support, the political will and everything else there. I don’t understand why people are holding back.

“I have had weekly meetings to get progress reports from the chairperson and the group CEO over a period of time at Prasa up until I left them on their own because when you appoint people in board and executive positions you expect them to move.

“When you are group CEO and a board member it’s not a learning curve. You have got to hit the ground running and do things and turn business around.

“That is why part [some] of the captains of the industry in the rail sector raised issues with me to say: ‘Minister we are closing shop’,” he said.

Mbalula said transfers to Prasa in the rail transport programme account for an estimated 27.2% or R57 billion of the department’s budget over the medium term period ahead.

However, he said Prasa has struggled for many years to roll out its modernisation programme, which is meant to improve the reliability of services and increase the number of passengers.

The modernisation programme entails focused spending on repairs and maintenance as part of the agency’s rolling stock fleet renewal programme, as well as improved security.

Mbalula said delays in the rolling stock fleet renewal programme, along with poor spending on rail infrastructure and the effects of the Covid‐19 pandemic, specifically lockdown restrictions, necessitated the reprioritisation of funds to support other entities in the transport sector.

He said that following a prolonged period of instability, the government recently appointed a permanent board of control, which is leading the intensified implementation of Prasa’s modernisation programme.

He said the group has spent 32% or R 62.2 billion of its budgeted capital to date.

While Prasa is struggling to spend its capital budget on the one hand, it is facing a cash flow crisis in relation to its operational budget, he said.

The rot has spread from the head to the entire body. The situational awareness and the management style in Luthuli House are now reflected in the bankruptcy and implosion of service delivery at all SOEs and at most municipalities. These institutions were world-class before Luthuli House deployed incompetent, self-serving, opportunistic, and stupid criminal cadres to spread the central-planning socialist dogma throughout the organs of the state. Mr. Fear-fokol Mbalula is an inherent part of the problem. He is the carrier and spreader of the incompetence and looting virus.

This is exactly what democracy promises. A wonderful constitution with an exemplary bill of human rights can be a death trap if the average voter suffers from the collectivist disease. The bankruptcy and inefficiency problem at Prasa does not start with the Prasa board, or Luthuli House even. It starts with the voter in his shack, or hut, in rural Kwazulu-Natal, Free State, and the Transkei. The infrastructure now reflects the mentality of the voter. They struggled for the right to vote for failure. Then, they voted for failure for 27 years. Now, they have reached the point of failure.

Communist cadres playing at “winkel-winkel”. South Africa used to have more than 80% of the total railway lines in Africa, if memory serves me. Those days are gone and are never coming back. Prasa and Spoornet are fully empowered and dysfunctional and will completely disappear in the next decade, their last remaining infrastructure stolen and sold as scrap metal. Viva comrades, viva.