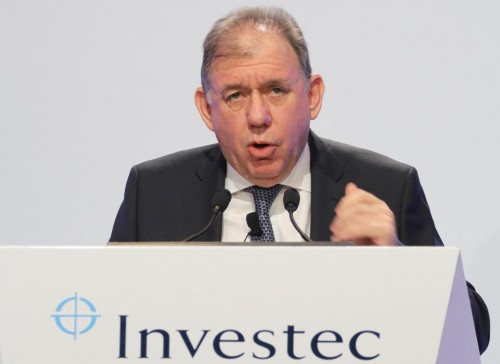 Stephen Koseff will end his term as CEO in October. Picture: Moneyweb

Raised in the same industrial town as actor Charlize Theron, Investec chief executive officer Stephen Koseff still retains the edge he picked up as a bloke from Benoni on the east of Johannesburg.

Now, after 40 years of jostling with South Africa’s biggest banks and money managers to build Investec into a business managing more than 154 billion pounds ($215 billion) in assets, Koseff and Investec’s two other founding members are making way for new leaders. Gone will be the 66-year-old’s rough-and-tumble, straight-forward way of calling out analysts or journalists about their latest reports. He isn’t shy of the odd expletive either.

Investec, which trades its shares in London and Johannesburg, is going with who it knows by promoting insiders in a massive management shakeup that will split the top job into two. Hendrik du Toit, the founding CEO of Investec Asset Management, whose chiseled features make him look more comfortable in a suit than Koseff, will oversee the business from the UK, while Fani Titi, 55, will step down as chairman to take the helm from the South African side.

“They will both be good CEOs,” said Adrian Cloete, a banks analyst at PSG Wealth. “It can work especially if you have a complex company. Logistically it also makes sense with the business spread across the UK, South Africa and Australia.”

Du Toit, 56, who holds a Master’s Degree from the University of Cambridge, joined the investment division of Old Mutual after lecturing economics at the University of Stellenbosch outside Cape Town. He moved to Investec in 1991 to start the company’s money manager unit and also serves as a non-executive director of Naspers, Africa’s biggest company by market value.

Titi, who has been a non-executive director at Investec since January 2004 and chairman since November 2011, was one of the founders of private-equity firm Tiso Group  and Kagiso Trust Investments. Titi, who holds a Master’s Degree in Mathematics from the University of California in Berkeley, in July stepped down as chairman of Kumba Iron Ore, served as a director at MTN Group, Africa’s largest mobile-phone company until December 2015, and also as chairman at explosives maker AECI for five years.

Du Toit was “long-touted to lead the business,” said Patrice Rassou, the head of equities at Sanlam Investment Management in Cape Town. “Perhaps the surprise is Fani. I would prefer one CEO ideally, but for now perhaps, it’s not a bad thing if they can split South Africa and the UK between them.”

Investec’s board have been working on the succession plan since November 2015 and the duo have “a good combination of skills,” Koseff said on a conference call on Tuesday. Moving to a co-CEO role will in some ways mirror the way Koseff and Managing Director Bernard Kantor, who both joined in 1980, have been steering the company, with Kantor based in London. They will both step down at the end of October.

“Fani spent 50% of his time with the group as chairman,” Koseff said. “He knows all the people and he understands our clients. He wanted to take on an executive role and we’re very happy to have him,” rather than losing him to another company, he said.

3 senior executives all standing down at the same time. And the chairman becoming the CEO. More the actions of a business managing some sort of crisis than a sensible succession plan. ‘The reforms are aimed at ensuring that there is adequate, reliable and affordable supply of petroleum products in the country,’ the statement said.