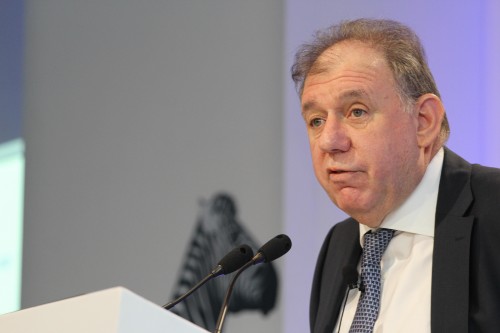 JOHANNESBURG – Investec Plc posted an expected 2.5% growth in statutory operating profits to £505.6 million (R10.7 billion) for the year to March 31, as a significantly weaker rand negatively impacted on the pounds sterling value of group results, despite reasonable profit growth across both its South Africa and UK businesses.

On a currency neutral basis, operating profits were up 13.5%.

“Group results have been negatively impacted by the 16.3% depreciation of the average rand: pounds sterling exchange rate over the period,” Investec said in a statement on Thursday.

Operating profits from ongoing operations increased 0.6% to £583.9 million (R12.3 billion), an increase of 9.9% on a currency neutral basis.

“These are a very solid set of results, given the economic challenges and volatility facing us in both of our key geographies,” Investec CEO Stephen Koseff told reporters via a media conference call.

Total funds under management in its asset management division amounted to £75.7 billion (R1.6 trillion), down from £77.5 billion in the prior period.

With roughly half the asset management funds managed in emerging markets, overall profitability was impacted when translating revenue from rands to pounds, Koseff said.

Investec’s specialist bank increased operating profit by 4.3% to £409.2 million (R8.7 billion). In South Africa, the specialist bank grew profits 12.7%, while in the UK profits jumped 20.9% on the prior year.

In South Africa, where it targets high-income individuals, Investec has “managed to thrive despite economic challenges” and risks of a credit ratings downgrade facing the country, Koseff said.

Third party assets under management decreased 2% to £121.7 billion (R2.6 trillion), an increase of 3.8% on a currency neutral basis.

On a group basis, net fee and commission income decreased by 2.9% to £1.1 billion (R23.3 billion), “largely as a result of lower fees earned in the UK corporate business following a strong prior year”, Investec said.

Commenting on Britain’s upcoming European Union (EU) referendum; municipal elections in South Africa in August; November’s presidential election in the United States; and Australia’s general election in July, Koseff said, “These are uncertain times, but we’ve built a resilient business and believe we have the capacity to grow and navigate these difficult times”.

A British exit of the Eurozone would be negative for London as a financial centre, he noted.

“We believe we will be able to navigate any kind of turmoil or disruption that is caused by any fall-out from the UK leaving the EU,” he said.

Investec’s multiple revenue streams position it well for upturns and defend it from volatility and “landmines in the road”, Koseff said.

Investec’s name appears on more than 24,000 documents in the Panama Papers. It refuses – point blank – to discuss the matter. No other South African bank has been as busy as Investec in the opaque world of tax havens, a world that is dreary, dodgy and features but few ambitions.

Methinks the ”dawn is neigh” for Investec!

My view on Investec:

Koseff Quote “Investec’s multiple revenue streams position it well for upturns and defend it from volatility and “landmines in the road”, Koseff said.
Which landmines are you referring to Koseff?

• Investec’s reputational loss (as extensively reported by Noseweek for a plethora of years now) that they suffered due to their cover-up of Kebble’s frauds which amounts to the most elaborate obfuscations in South African Corporate history. According to Noseweek 194 December 2014 Investec has profited to the tune of ZAR 2 billion-plus from the Kebblegate saga.

• The way in which Investec UK (they had constructive knowledge that this was stolen shares) entered into a ‘’script lending’’ agreement with JCI (which was no more than a collateralised loan), involving the theft of 5, 46 million Randgold Resources shares by JCI from Randgold (Noseweek 178 August 2014). ‘’If this were not enough, Investec retained ZAR 106 million of the cash raised from selling the stolen shares , to repay debt owed to Investec by Kebble personally. Poor Randgold received nothing from the stolen shares.

• The manner in which way Investec sold a naked hedge to Western Areas for 1, 8 million ounces of gold (with unlimited upside loss protection should the Gold price rise above approximately $ 300 – which it did!) and their modes operandi thereafter. No reputable bank in my mind and experience should sell such a structure…not even to the devil!

• Watcha gonna do when Goldfields come for you, as shareholder circulars issued with the blessing of the JSE –show that when NYSE and Johannesburg listed Gold Fields bought Western Areas, the details of the stolen money were totally suppressed! (Noseweek 199 May 2016)

Investec have been making the deadlines (Kebblegate Saga) for years now, for the wrong reasons!