A global surge in initial public offerings has so far eluded sub-Saharan Africa.

Companies have raised a record $467 billion on the world’s stock exchanges during the first eight months of this year, according to data compiled by Bloomberg. Yet in Johannesburg, home of Africa’s largest bourse, 21 companies have instead de-listed in 2021. Smaller exchanges in Accra, Nairobi and Lagos have been similarly quiet.

The world’s highest unemployment rate and a lack of confidence in South Africa’s economic recovery are pushing companies toward more affordable funding sources.

Firms in the continent’s most-industrialized nation, especially smaller businesses, have been finding it easier and cheaper to raise debt to fund growth than issue shares, Mate Munalula, co-head of markets for Citigroup Inc. in the country, said an interview.

“Being listed can be perceived as more onerous, procedural and administrative when running a small entity,” he said.

Another reason is that technology and digital startups in the country are in short supply, yet that sector has accounted for a major part of the global IPO rush. Chinese ride-hailing giant Didi Global Inc. raised $4.4 billion in the U.S. in June, while KakaoBank Corp., South Korea’s first internet-only lender to go public, sold $2.2 billion of stock and soared more than 70% in its trading debut. 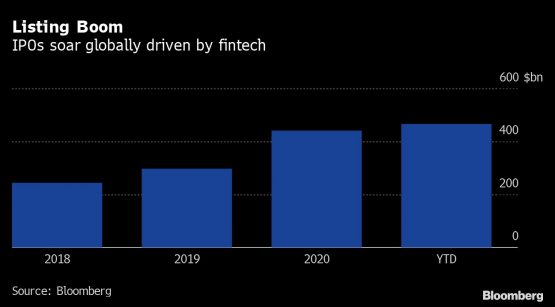 South Africa has two fast-growing tech firms in branchless lender TymeBank, backed by billionaire Patrice Motsepe, and payments company Yoco, but both have sourced cash outside the equity-capital markets. TymeBank raised $109 million in February, at a valuation of R8 billion. Yoco attracted $83 million in July.

In Nigeria, fintech companies are emerging on the radar of high-profile investors. But U.S. firm Stripe Inc. agreed to pay $200 million to buy out Lagos-based Paystack, and Flutterwave Inc. said it would look to New York as a potential IPO destination.

Wireless carriers MTN Group Ltd. and Airtel Africa Plc have indicated a willingness to spin off fast-growing fintech or mobile-money arms, valuing them at billions of dollars. Though in both cases an IPO could be years away.

“When you look at disruptors that are listing to attract capital, in South Africa we’ve been quite a laggard,” said Kyle Wales, portfolio manager at Flagship Asset Management. “E-commerce penetration in South Africa is 3%. In China the same ratio is 25%.”

Three firms that opted out

Comair, the South African partner of British Airways, was put into bankruptcy protection amid Covid-19 travel restrictions. The carrier was later rescued by private investors and de-listed.

Listen to Simon Brown’s MoneywebNOW interview with Zak Calisto below:

Revego Africa Energy Ltd., an investor in South African renewable projects, had planned to raise as much as R1.5 billion but opted instead to pursue a capital raising in the private market, CEO Reyburn Hendricks said.

The lack of IPOs and exodus from the JSE Ltd. could also be linked to South Africa’s near-stagnant economy and spiraling unemployment figures.

The corruption-tainted tenure of former President Jacob Zuma and the subsequent coronavirus pandemic have weakened investor risk appetite, said Citi’s Munalula, while a riot and looting spree that followed Zuma’s arrest in July only exacerbated the situation.

“The long and short of it is South Africa’s economy is the over-riding factor,” Munalula said. Still, there are reasons to believe in a recovery. Economists surveyed by Bloomberg predict gross domestic product will expand 4.2% in 2021 after contracting the most in a century last year.

A number of companies are privately contemplating listings from 2022, according to Richard Stout, head of equity capital markets at Standard Bank Group Ltd.

Those to have made their intentions public include medical-cannabis firm Cilo Cybin Pharmaceutical Ltd., while Bushveld Minerals Ltd., a London-listed vanadium miner, has said it remains interested in a potential listing on the JSE.

South Africa’s large state-owned companies may also have scope to raise funds via an equity sale, though this may “require some mind-set change,” according to John Slettevold, head of South Africa at UBS Group AG. “The state-owned enterprises in South Africa have flooded the markets with debt and there should be space to add equity to this,” he said.

“We certainly don’t subscribe to the view that the JSE is facing an existential crisis,” Stout said.

The JSE is becoming irrelevant. Mainly propped up by regulation 28 and the likes of the PIC.

That in itself makes it a risky market especially in a political unstable environment.

Then you have the BEE curse and brain drain.

The locals should own the economy so let them invest in it. Some of us are not welcome except to be ripped off by the one BEE scam after the next.

The locals need to step up to the plate and not just talk!!

Add to that the casual and lax regulations, cosy executives and non- executive director relationships, often with life and pension firms, leading to investor money being treated as a honeypot to be dipped into at will. I am a reluctant investor, rather reversing out of the JSE.

Also plenty of insider trading going on, and the JSE never lifts a finger to do anything about it.

There is existential crisis most everywhere as the transfer of wellbeing from the 99% to the 1% continues unabated and unaddressed.

Long term, the JSE is toast.

In normal circumstances considering the economic and fiscal challenges in SA the JSE’s days are numbered. But also modern technology is accelerating the decline, hereby I mean that normal ordinary investors can easily now trade on most exchanges across the world. I personally trade only on US/UK/EU listed exchanges and closed all JSE positions and accounts almost 5 years ago.

People also seem to forget that most of the big companies listed on the JSE are also listed on at least one of the overseas exchanges, meaning I really haven’t lost access to the major companies.

The SA economy and prospects for global investors is dismal under the current political regime, so considering the JSE, the proof of the pudding is in the eating. Follow the money …

ANC land not attractive to investors. Start doing the right things and things could turn around strongly.

When you let your exchange be dominated by rouges and brigands, then the perceptions of trust go out the window.

When the offshore investment allowance was increased to R10m per person per annum in 2015 (plus an additional R1m annual allowance), it signalled a surge in outward flows from wealthy individuals in South Africa. According to Mike Schussler, consulting economist to Brenthurst Wealth, more than R1trillion has left SA using these channels, to be invested in the chosen markets all over the world.
Why would you limit your investment choices to a small mining dominated economy with all of its problems, when you can choose from the most innovative and creative economies anywhere in the world?
Sadly, highlighting these indisputable facts, makes one the target of scurrilous comments on MW, but it doesn’t change the underlying trend. The JSE has not been creating wealth for its investors in recent times and no reference to 100-year returns will ever change that. What is relevant to investors is current trends (10 years at most.