The Mara Z, one of the models of the Mara Group's new smartphone being manufactured at its new plant at the Dube TradePort SEZ, north of Durban. The manufacturing plant will officially be opened on Thursday. Image: Supplied

Mara Group CEO Ashish Thakkar confirmed to Moneyweb that President Cyril Ramaphosa together with other dignitaries will officially open the factory. 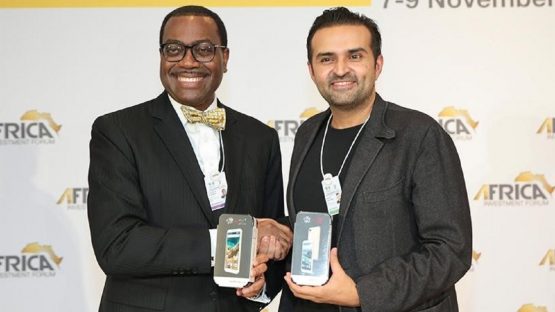 Mara Group founder and CEO Ashish Thakkar (right) together with Akinwumi Adesina President of the African Development Bank (AfDB) holding replicas of the new smartphones to be produced in SA during a AfDB event last year. Image: AfDB

Moneyweb broke the news in February that Dube TradePort, next to the King Shaka International Airport north of Durban, had secured the Mara Phone manufacturing plant, to be based at the SEZ.

Speaking exclusively to Moneyweb this week, Thakkar said the group is investing around $200 million in the setup of both factories in Kigali and Durban, which will manufacture “made-in-Africa” smartphones for the first time. There are other mobile phone facilities in Africa, but these operate as assembly plants.

“Most importantly our high-quality but affordable smartphones will be manufactured at our Mara Phone plants in Rwanda and South Africa…. We’ve already invested $50 million in the Kigali plant and more than $50 million in the Durban plant,” he says, adding that the plants are the same size.

Thakkar says each plant will employ 200 people at the onset, of whom over 60% are women and over 90% youth. This will increase as production rises and the full $200 million investment is rolled out.

The Mara Phone plant at Dube TradePort will ultimately “generate over 1 500 direct jobs and thousands of indirect jobs” when it gets to full capacity over time. The Rwanda operations will target the east and central Africa markets, while the SA plant will largely target the local market and export to Southern Africa.

“We currently have two smartphone models – the Mara X and Mara Z. In the future we will have more models such as the Mara X1, Mara Z1.

“Our capacity (at our plants) is a few million smartphones a year,” he adds.

On why he decided to invest in SA and to finalise the plan within a year, Thakkar says: “We strongly believe in the South African fundamentals and the leadership…. KwaZulu-Natal and Dube TradePort have been amazing and it’s the perfect location for Mara Phones in South Africa. Literally everyone, from the Department of Trade and Industry to Trade and Investment KZN, InvestDurban, Proudly SA, the Industrial Development Corporation and the presidential envoys for investment came together to make this investment happen.”

SA’s cellphone market is dominated by Asian and US brands, including the likes of South Korea’s Samsung, China’s Huawei and US-giant Apple’s iPhone. The rest of the continent is dominated by Chinese brands and Samsung.

Thakkar believes Mara Phone will make an impact on the SA market and the rest of Africa.

“We believe South Africans are very passionate about Proudly SA (products), especially if the quality is of global standards… However, we are also creating jobs in SA hence we are very confident that telcos, retailers and banks will appreciate and promote this [the Mara Phone) as they share the common vision of creating employment in SA.”

Mara Group’s investment into Dube TradePort is within the first phase of the SEZ, which has already attracted investments to the tune of around R4 billion.

Some good news for SA

Akinwumi Adesina: If Eddie Murphy and Martin Lawrence had a kid.

Now how much is this going to cost South Africa at the end of the day?

Sounds like a good venture. If China and India can each have multiple manufacturers servicing their countries and export why not Africa. Huawei, Xiaomi, Oppo, Vivo, all top 10 manufacturers of Android phones at low prices. I just wonder what price point they’re competing with, cause iPhone, Samsung, Huawei, Xiaomi have covered most of the decent price points. There’s even cheaper rubbish where our cell providers are whitelableling but are so cheap I cant imagine you get an ROI.

I wonder how much they are going to milk the DTI who are very gullible and will probably put down all the money for the project. The assembly line could only be costing 50million, Mara must have over inflated the price and a few guys in government is going to get very quickly rich. So before they even started they have pocketed 2 billion.

How on earth are you going to compete with the Chinese. The price is in the semi conductors and the components and not the phone or the assembly. How did they come up with the price tag of $200 million. Dont tell me they are thinking about going into R&D and producing the semi conductors, battery and the screen which is almost impossible.

The transport factor to ship a phone from China to SA by container(24 000 pieces fit in a container with a value of 24 million and cost of shipment is 50 000.00) is probably 0.2% of the transport cost, how on earth are you planning on competing on price or unless they have a serious strategy that is a game changer or its game over for them.

There are certain things in life you dont need to get fascinated about and needs to be left untouched.

Good luck to the gullible.