Shareholder concerns are dispensed with in short shrift at AGM.
By Sasha Planting 25 Aug 2017  17:48 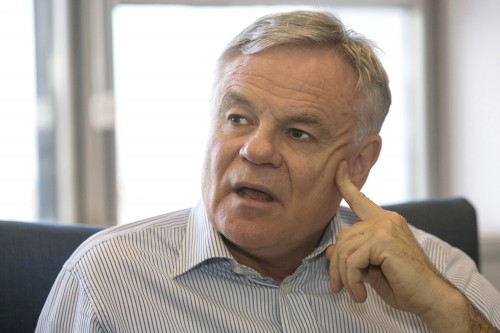 Naspers chairman Koos Bekker used the platform afforded him at the company’s AGM on Friday to slay a few shareholder dragons – first up being the notion of corporate governance.

“It sounds wonderful. If you want to be the best soccer team in the world it is important to wash your hands after using the bathroom. But will you win? Not unless you train the hardest, recruit the best and are merciless in your ambition.

“Once you have won, then you can look at things. If you lose, the best governance in the world can’t help you.”

Bekker did not explain his reason for his dig at corporate governance. After all Naspers is the third largest company on the JSE by market capitalisation and can hardly be considered a loser.

Perhaps it had something to do with the criticism by asset managers and other investors of Naspers’ remuneration policy, which reached fever pitch recently and culminated at the AGM, which was held in Cape Town on Friday.

Bekker made a show of entertaining questions from shareholders, including shareholder activist Theo Botha. But after three rounds of three questions, Bekker refused to take further questions from Botha or anyone else and called an end to the meeting.

“1 to Naspers, 0 to Botha,” the activist said following the meeting. “What happened to the notion that shareholders could pose questions to management at an AGM?”

That the Naspers board does not like answering what it considers irrelevant questions on the business is clear. But things are changing with regard to remuneration disclosure and perhaps Botha will have the last laugh.

Listed companies can no longer choose to ignore King IV, says Melanie de Nysschen, corporate finance principal at Bravura. That is because certain of the King IV requirements have been included in the JSE Listings Requirements and become mandatory for listed entities.

“Listed companies will be required to disclose in their annual report the voting results and the nature and steps taken to address objections raised by shareholders,” she says.

The AGM was well attended and shareholders did not only want to discuss remuneration, but also to address concerns relating to the dominance of Tencent in the business.

Over the last two years the value of the Tencent stake relative to Naspers’ market capitalisation has grown from 90% to 130% and continues to accelerate.

The Chinese media giant grew its topline business by 55% in the last quarter. Meanwhile the value of Naspers’ dozens of other investments and businesses, which include media, e-commerce and pay TV, has declined to negative R340 billion over the last two years.

Bekker slayed this dragon with gusto.

“We [Naspers] were advised to sell our stake in 2004, when shares in Tencent were worth one Hong Kong dollar. Five years ago there was agitation to sell at HKD45, and again today at HKD325, people want us to sell. We think the price is going up, and that this is the best opportunity for our cash at the moment.”

The third dragon – how to extract value from Naspers’ other businesses (which have been discounted to below zero by the market) was also slayed.

“Some people are obsessed with the idea that the share trades at a discount to the parts. Most composite companies run at a discount. In the last five years the big four (Facebook, Amazon, Netflix and Google), which are all composites, have outperformed the market by 120%,” Bekker says. “The argument for breaking up Naspers is completely illiterate.”

Naspers CEO Bob van Dijk added that losses in the e-commerce businesses were declining and that 21 of the companies were now profitable.

“Five years ago, the top five companies on the stock market were oil and finance companies. Today the top five are technology companies,” he says. This is not over and the big will grow bigger. “Amazon, Google, etc – they are coming after all of us. Scale is very important. If we don’t have scale, or if we underestimate the competition, we will be eaten alive.”

And that is the problem. AGM’s are ideal places to gauge corporate culture. In some companies the board of directors embraces the opportunity to engage with shareholders and share valuable information. They are delighted you have taken the trouble to attend and are eager to talk.

At Naspers’ the AGM feels a bit like an exercise in mutual back-slapping: directors for rewarding shareholders so handsomely over the years; and shareholders for being so loyal.

Cannot argue the results over time

I am no expert, but believe it is time to sell my few thousand Naspers shares.

Bekker and his merry friends, are riding the wave of being very very lucky with ONE investment they made

We all know what happened to AB….given the arrogance and under performance by Oom Koos and his mates on other Naspers efforts, time to get out, for me!

I will probably regret this move short term, but hope my decision makes sense long term

I can already see the snot and trane coming.

Naspers is less than zero without Tencent but the arrogant Afrikaners don’t realise it yet.

Dear Allan Gray, so what came from your ‘’demands’’ ? I think you lost this one – love and love!
‘’Show me a good loser and I will show you a loser’’ Anonymous.

I also think that you should just forget that this is not JCI, where alliances was formed to obtain complicity and silence, as you and Investec coalesced in preventing Randgold from pushing JCI into liquidation, and thereby keeping the Randgold minority shareholders in the dark (Kebblegate and Investecgate – in the public domain for years has reference)

Don’t try to interfere with Naspers, the market leader’s remuneration policies and rather start worrying about your shareholding in the energy sector like Sasol, where you are almost connected to the hip etc.

I also think, save to say that ”Koos vattiekakie”, from kabouters!

”Anybody can win, unless there happens to be a second entry”

Looking at AG’s 2017 second quarter’s results, it shows that it holds 7.6% (50% of the total resources holdings) of the (equity) fund in Sasol. SASOL only returned 7.76% (price appreciation) over the last 5 years whilst the ALSI managed 67.3% over the same period.

Yet they only hold 7.4% of the fund in NASPERS – which managed 542% over the same period. And to top it all, they ignored Naspers for years. I brought this up at AG’s annual investment conference some years ago and the response that they gave was “too risky” – well I think that Sasol is way too risky but they don’t see it that way. I can no longer attend their annual bashes because I am no longer a client.

This is a classic example of vote pooling (or voting collaboration) arrangements between larger shareholders where the likes of certain asset managers, insurers, banks, and pension funds (on behalf of the millions of private investors they supposedly represent) collaborate to vote as the board of a company requires and not necessarily bound by the best interest of the captured investors. Unethical corporate style tactics.