After a pretty bad listing on May 9 last year and even worse news for investors at its June interim when headline earnings just about halved, Libstar has had a tough job convincing the market of its worthiness as an investment.

Its results for the year to December went some way to dispel the scepticism and prompted the share price rise of 10% to R7.83, still well off the R12.50 price pegged prior to Libstar’s listing.

The group, which makes a large chunk of major supermarkets’ private label food, reported an increase in revenue of 12.5% to R9.9 billion (2017: R8.8 billion), with a 5.1% increase in organic revenue.

While he would not name them, financial and commercial director Robin Smith indicated that three major retailers comprised 18%, 18% and 16% of revenue, supposedly alluding to Woolworths, Shoprite and Pick n Pay but not necessarily in that order. 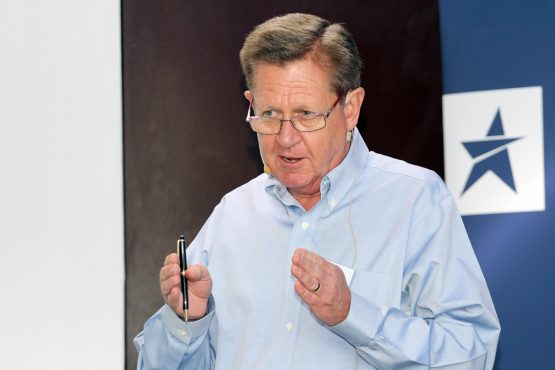 Libstar’s Robin Smith says innovation has been a big part of its strategy in 2018. Image: Moneyweb

Normalised earnings before interest, tax, depreciation and amortisation (Ebitda) grew 4.6% to R984 million in line with previous guidance that the second half would account for 60% of Ebitda. Normalised basic and diluted headline earnings decreased by 16.1% to 73c a share from 87c previously.

These are the first full-year earnings since Libstar’s listing, when the share price tanked following a too-positive pricing expectation and a fair amount of criticism that the listing was hastily put together, that the company lacked transparency, and that the listing represented an opportunistic chance for the beleaguered Abraaj Group, which owned 62%, and the Public Investment Corporation, which owned 17%, to shed their shares.

Its interim results, which did not meet expectations, added fuel to the furore.

Full year results, however, were credible, especially in light of a slew of poor results from other companies along the consumer goods supply chain.

Libstar said the retail and consumer environment was the toughest since its inception 14 years ago. It did, however, see a slight acceleration in volume growth in the second half of the year. Organic revenue was bolstered mainly by the successful launch of Lancewood-branded dairy products, while volumes at Denny mushrooms, which had a disappointing first half, stabilised and had record production in the last few months.

Libstar focused on category and channel development, invested R349 million in new technologies, efficiency improvements and capacity expansion, and worked on standardising its IT systems.

The group has been exploiting some trends, including on-the-go and convenience eating with products for McDonald’s, KFC, Nando’s, Panarottis, Mugg & Bean and Spur.

It has also launched products to suit the health and wellness trend.

Importantly, it remains on track aligning with the growth in private label and dealer own-brand products, with 44% of its revenue being accounted for by these.

Perishables – including Lancewood and Finlar Fine Foods (supplier of meat to McDonald’s, among other things), which account for 46% of group revenue and 43% of Ebitda – grew revenue 22.5% on the back of a strong performance in dairy where new products were launched, and the acquisition of Sonnendal Dairies. Denny Mushrooms improved production while cheese and butter revenues were up.

The ambient groceries category, which accounts for 25% of group revenue and 32% of Ebitda, saw revenue decrease by 5.5%. The division, including Cape Herb & Spice, Rialto Foods and Dickon Hall Foods, was affected by weak international demand for dry condiments, integration delays and industrial action at Dickon Hall.

Ambassador Foods, which comprises the snacks and confectionery division, accounting for 5% of group revenue and 7% of Ebitda, increased revenue by 11.4%.

The results were positive in that Libstar delivered 5% like-for-like volume growth across the business, which is reasonable, says Buss. “Relative to other retailers and food producers, positive volume growth means you are doing well.”

Buss adds that Libstar also benefited from being exposed to a few categories that are growing well, mainly private label, a significant differentiator for retailers, which has increased from 41% to 44% of sales. Another growing category is health and wellness. “Throughout its portfolio it has had a big drive on those products, including Ambassador.”

Smith says Libstar management has worked hard at ensuring the group’s message is well understood, although the job was a lot easier “when there is better news”.

The group’s range of offerings and its presence in a number of categories had added to its resilience, he adds. Innovation was a big part of its strategy in 2018, with new products and different tastes and profiles that excite the market, borne out of partnerships with the retailers and the group’s branded products.

Libstar will continue playing into trends, including private label, which continue to grow.

The group expects a difficult first half and will focus on organic growth. Since year-end, margin levels have held and are expected to be maintained

It expects marginal food inflation of between 0% to 2%, although inflation across its product range would be 4% to 6%. Growth will need to come from picking up volumes, while product innovation will see it grow its market share and the overall size of the market.

Projects and developments in 2019 include a new tea plant for the local and export market, and a new plant to manufacture Pringles for a third party.

Libstar is expanding its prepared meal capacity to further tap into the growing convenience market and will develop a new soft cheese value-adding and packing facility.