The industry is facing its worst annual performance yet.
By Suren Naidoo 5 Aug 2020  00:02 Office buildings such as these in Sandton are likely to experience less demand as leases expire. Image: Moneyweb

Covid-19 has plunged the listed property industry into its most challenging year yet, with the sector still trading around 40% weaker since the beginning of January on a total return basis.

This means listed property looks set to retain the unenviable title of being the worst-performing asset class for three years in a row.

According to data from Anchor Stockbrokers, the JSE’s All Property Index (Alpi) has plunged 40.4% for the year to the end of July. The Alpi covers all property funds listed on the JSE, including dual-listed counters such as UK-based Hammerson. 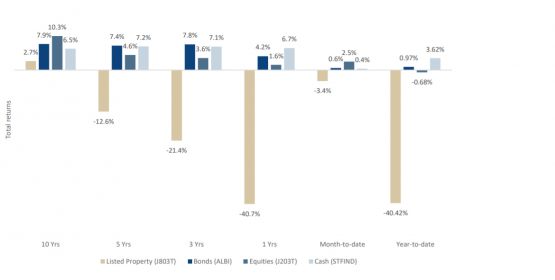 The Alpi vs other asset classes in total returns for the year to end-July. Source: Anchor Stockbrokers

The FTSE/JSE SA Listed Property Index (Sapy), which comprises the top 20 largest and most liquid primary-listed South African real estate investment trusts (Reits), is 39.5% weaker for the seven-month period to the end of July.

In comparison, there was a 0.7% decline in SA equities. Cash came in tops with 3.6% growth, while SA bonds delivered growth of just 1%. 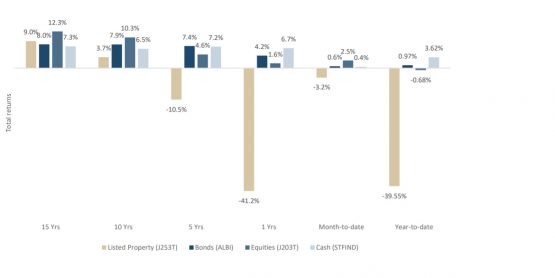 The Sapy vs other asset classes in total returns for for the year to end-July. Source: Anchor Stockbrokers

The listed property sector lost most of its value in the first quarter of the year, largely in the month of March as the initial Covid-19 hard lockdown was announced. However, it did recoup some stock market losses in the second quarter.

After plunging just over 48% in the first quarter, the sector rebounded by the end of the second quarter (end of June) to being around 38% weaker for the year. This was mainly due to a robust rally in June.

“The listed property sector rebounded strongly for the month of June 2020, with most of the property counters delivering positive share price returns. Redefine was the strongest, with a whopping 72% uplift in its share price (from R1.92 to R3.31) followed by EPP at 54%,” Anchor Stockbrokers notes in its month-end report for June.

Nevertheless, the sector started the second half of the year on a negative note, with the Alpi declining 3.4% for the month of July. This has contributed to listed property backtracking to being around 40% weaker for the year to date.

“After a strong rebound in June, the listed property sector retracted again in July. Vukile was the largest decline with a reduction of circa 24% in its share price over the month of July, followed by Texton which had a 19% reduction,” Anchor says in its July update.

Hospitality Property Fund’s B share also fell 61%. Texton was down 59%, while both Octodec and Redefine Properties were down 58%. The overall biggest loser in the Alpi is Hammerson (-75%), while peer UK-based property fund Growthpoint-owned Capital & Regional was down 63%, rounding off the 10 worst performers. Craig Smith, head of research and property at Anchor Stockbrokers, tells Moneyweb that counters with weaker balance sheets and liquidity profiles, or predominantly exposed to the retail sector (with a higher proportion of non-essential retailers), are generally the worst affected.

“Worth noting is that the listed property sector was already under pressure pre-Covid-19, due to weak property fundamentals. Furthermore, South Africa’s economy was already in a technical recession. We really need economic reforms to boost growth,” he says. 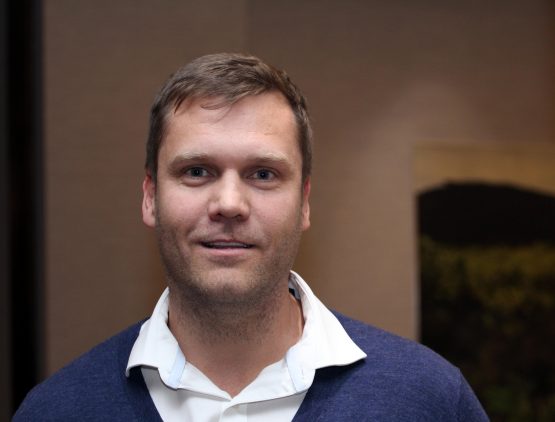 Smith would not be drawn into commenting on expectations for the rest of the year, or whether listed property will be the worst-performing asset class again this year.

“A lot will depend on how things progress with the virus, lockdown and economic reforms [if any],” he says. “The focus of most property funds will be on managing balance sheets and liquidity amid uncertainty in the market.”

Keillen Ndlovu, head of listed property funds at Stanlib, says volatility in the industry is likely to continue in the short term, adding that “this can create long-term buying opportunities”.

He believes physical property values are likely to fall 10% to 20% in the short- to medium term. His view is largely in line with the market forecasts of sector heavyweight Growthpoint.

“This [devaluation] is mostly priced in, as Reits are trading at 50% below net asset values,” he points out.

“Distributable income is likely to fall by double-digit levels over the next year or two given the challenging environment.… Distribution payments are being delayed or withheld and the focus is now on total returns as opposed to just income. Reits are also retaining some of their profits to help strengthen their balance sheets.”

Ndlovu says commercial property vacancies, arrears and bad debts are likely to increase, particularly within the retail sector. However, he notes that the office sector will also experience less demand as leases expire.

Economic reforms “If any” by this government will not have ANY positive effect on the property sector.

ITS THE ANC REMEMBER.

Brics and mortar as long term inflation beater perhaps beaten by a virus?

Turn it into flats

They can’t even give flats away anymore, especially in Cape Town. Desperate AirBnB “entrepeneurs” flooding the longterm rental market after their rags to riches story ended in tears…

What begins as populist interference in the economy by a central planning socialist government, ends in the devaluation of the currency. Everybody loses, but those who became dependent on the socialist policies will be the biggest losers of all. They will pay with their lives, like in Venezuela and Zimbabwe. It is unavoidable. BEE policies will lead to a banking crisis, it is only a matter of time.

Seems the Masters of the Universe aren’t so smart after all. Wonder if salaries will now be trimmed 40%, doubt it. Maserati salesman must be breathing a sigh of relief there

The listed property sector, and other sectors, think that we are in a v-shaped recovery, but the truth is that the layoffs are only just starting and we are entering the eye of the hurricane.

Therefore the languishing will continue for a while. 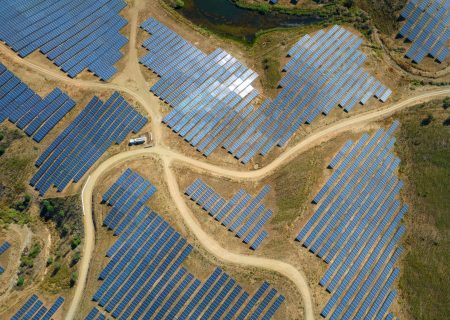