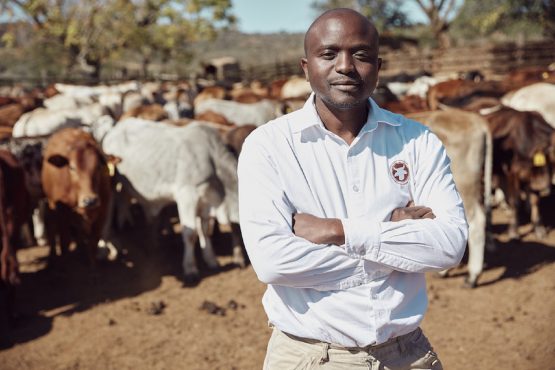 Agri-tech entrepreneur and CEO of Livestock Wealth Ntuthuko Shezi is bullish about South Africa’s agriculture sector. He has good reason to be – his ‘crowdfarming’ venture has just secured financial backing from Rand Merchant Investment Holdings (RMI) and has started supplying retail giant Woolworths with free-range beef.

Speaking to Moneyweb during a presentation at its Johannesburg offices on Wednesday, Shezi confirmed RMI’s financial support but said he could not reveal the value of the investment.

“It’s a big boost for us both in terms of capital to grow the business and from a profile perspective,” he says.

“Livestock Wealth now has more than 2 000 cattle on several farms in different parts of the country and about 1 000 investors currently. Now that we’re gaining traction, our target is to have about 10 000 investors by the end of our financial year in February.

“Late last year, we secured a lucrative agreement to supply Woolworths with free-range beef and we sent through our first supplies in April. In the last three months we have supplied Woolworths with around 64 tons of beef. Woolworths is a great brand to be working with and it naturally has strict supplier protocols, which we must adhere to.”

Shezi says the Woolworths contract is a start, and that there is big growth potential considering the increasing popularity of free-range meat.

Read: When in doubt, buy a cow

Livestock Wealth was started in 2015 when Shezi realised there was an untapped commercial opportunity around livestock farming in SA that could leverage off the African community’s close links to cattle.

“Historically, wealth in the African community has been around the number of cattle you had.

“While things have changed since 1994, with black South Africans having access to more job opportunities and generating wealth in different ways, cows are still an important part of Africa tradition,” he explains.

Shezi says around half of SA’s 14 million cattle are still owned by black South Africans – largely in rural areas – who do communal farming without access to markets. “Livestock Wealth bridges that gap. It gives communal farmers access to markets, while offering investors a chance to invest in cattle. They [investors] can chose to invest in cattle that will be grown on the farms we work with to supply either meat or cows that produce offspring,” he adds.

According to Shezi, investors can put their capital into buying individual cows or bulls; alternatively, multiple investors can invest smaller amounts for a ‘share’ in the animal. Livestock Wealth works with farmers who raise the cattle until they are around two years old and ready to be sold.

He says the farmers benefit since the biggest challenge they face is access to capital.

The whole process is linked to an app and investors can view and track the cattle they buy on the farm at almost any time. Livestock Wealth has joined forces with MTN and Huawei on the livestock tracking technology.

The company won the SAB Foundation’s Social Innovation Award in 2017, which included prize money of R1.3 million to further develop his business.

Things have progressed significantly since then – Shezi says the business is now a R100 million enterprise with its eye on further investments into SA’s agriculture sector. High-value vegetable and macadamia nut farming could be on the horizon.

Shezi, graduated as an electromechanical engineer from the University of Cape Town and is no stranger to tech start-up innovation. After leaving professional services heavyweight Accenture in 2006, he launched Scratch Mobile. He was born in rural Ndwedwe on KwaZulu-Natal’s North Coast, which he says has influenced his rural-urban agri-tech innovation.

Agricultural Business Chamber chief economist Wandile Sihlobo says SA is currently estimated to have around 12.8 million head of cattle, with some 40% owned by rural people or communal farmers. He says the drought in 2015 led to cattle numbers declining from around the 14 million mark.

“Cattle farming is worth around R142 billion and is a growing agricultural sector in SA, considering the growth of beef exports from the country over the past few years,” says Sihlobo.

“Cattle farming is the second-biggest sector within livestock farming after poultry in SA. Innovative ventures like Livestock Wealth are important to grow the agriculture sector, and useful in the development of previously disadvantaged areas and communities in the country.”

Why not take it a step further? Launch a cryptocurrency backed by cattle. Then it is time to really get innovative. Run a fractional reserve backing by holding only 10% of the aggregate value of the currency in circulation in cattle. This is the way you farm with cattle if you want to become wealthy.

We will read about this scheme on Moneyweb in future. On one sunny afternoon, one investor, with a beer in his hand, will ask one question – “Where is my cow?” Then another will ask the same question – “Where are our cattle?” The reply will be- “Investors don’t own specific cattle, they share in the herd.”

Then the audit will reveal that there is a huge shortfall of cattle when reconciled with the investors who bought cattle. That will signal the beginning of the “run” on the farm. Investors will cry, the operator will play the victim and blame the banks, blame Woolworths, blame the government and blame investors for being greedy.

A pessimist is an optimist with experience.

Aye Sensei, I also know a little of farming and what seems to be missing is the very basics of business. Can what is produced be sold for more than the input cost? Now farming is tricky as you will only know the sale price when the goods are produced; unless you hedge via futures etc. Even a rudimentary scan in this modern world will show that cattle, grass fed only will be slow to reach sale size slowly (maybe three years) and meat quality, while having taste will be “tough”. In this area you will compete against Namibia and Brazil; not that easy.

Producing weaners to sell into feedlots may be better but there again, the emphasis will be on an animal that is wellbred, healthy and can gain weight quickly to produce good meat grades. Good luck with free range mixed breed cattle; if they don’t get stolen for chisinyama. Maybe for pies?

Could not disagree with you more Paul. Based on years of experience in the region with supposed “C Grade” “mixed breed” animals I have demonstrated good returns in South Africa over the past 12 months with certified grass fed and free range cattle. There cattle sourced from smallholders and put through our induction and fattening program. Its amazing what maturing beef on the hoof can do and I would not touch another feedlot-fed, hormone-soaked, so-called-A-Grade steak in my life again!!. ITs not tough, it has texture and the colour and flavour are beyond anything I have eaten from top feedlot brands in years. Have a look at our Agrisat Smallholder Beef Hubs or contact me through Linked In if you are interested in learning more.

This is an inspirational story. Would be nice if there were more. If there are more there should be much more written about them to try and balance out the consistent, albeit true, bad news stories.

How do I join the investment group ?

Do you honestly believe that this is a new, innovative investment opportunity? These type of investment schemes have come and gone. Many farmers have tried it, some are still involved in it. They call it an investment, a lease, share-cropping, managed herd etc. Most end in disaster when the owner of the cattle realize that the manager has sold the cattle and spent the money. What guarantees actual ownership for the investor? Who holds the title-deed to the cow? Are assets held in a “segregated account” or is this a “collective investment scheme”? If it is a collective investment scheme, is it registered with the FSCA? Does the manager have an FSCA registration number? Who is the Key Individual?

The mere fact that it makes a noize at the front and rear, eats grass and recycles water does not guarantee ownership or growth. Would Warren Buffet invest in this opportunity? If not, why not? Each and every highly successful Ponzi scheme had investors who were impressed by the level of sophistication and uniqueness of the opportunity. Now, we have a cow….

Sensel I think perhaps you should learn a bit more about this investment model before you diss it but all valid questions and concerns and trust Shezi will answer them here!