The latest cost to completion for Medupi, including flue gas desulphurisation plant, up from R118.5 billion to R160 billion.
By Chris Yelland 6 Jul 2016  14:38 Besides Eskom’s financial results for the year ending March 31 2016, perhaps the most important new information to come out at Tuesday’s media briefing at Megawatt Park, the state-owned power utility’s latest estimate of the overnight capital costs, or cost to completion (CTC), for its Medupi and Kusile power stations.

The latest estimated interest during construction has still not been disclosed by Eskom. However, in light of the significantly-increased capital costs and delayed project programmes for both Medupi and Kusile (Fig. 1a and 1b), it is expected that IDC for both Medupi and Kusile could increase by about 25% above the figures previously indicated by Eskom in September 2014. 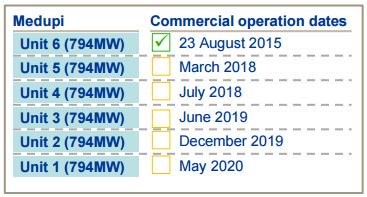 It should be noted that although FGD plant was not initially included in the costing of Medupi, the site has been designed to be ready to install FGD plant at the first major shutdown of each unit after construction. Furthermore, FGD plant is required at both Medupi and Kusile in conditions of a US $3.75-billion World Bank loan to Eskom, approved in April 2010.

Kusile, on the other hand, is being constructed including FGD plant from the start.

The history of the estimated CTC approved by the Eskom board from time-to-time and communicated to the public for the construction of Medupi is as follows:

Similarly the CTC approved by the Eskom board for the construction of Kusile is as follows:

A previous-estimated total CTC in September 2014 for Medupi and Kusile power stations, including IDC, FGD and the settling of unprocessed contractor claims, is given in Table 1.

An updated total CTC as at July 2016 for Medupi and Kusile power stations, including IDC, FGD and the settling of unprocessed contractor claims, is estimated in Table 2.

Thus the massive cost and time overruns at Eskom’s Medupi and Kusile power stations are expected to further strain Eskom’s financial resources, and place upward pressure on Eskom’s electricity price trajectory in the years ahead.

I bet Molefe won’t address these issues with the same enthusiasm that he delivered the financial results – his particular penchant is playing with an abacus, but as a solution person he dismally fails. He fails to address the issue of outstanding debts by users, illegal connections, time lines on projects to completion. There is no legitimate reason that anybody at Eskom justified above inflation increases in salaries and bonuses – but then the government seldom punishes its own.

The human forgets too quickly, unsustainable future coming to tarrif increases…..Eskom submitted an application to Nersa in November last year to recover R22.8bn amongst other increases, which the utility said it used to avert load shedding… Surely once this amount is recovered one would receive a reduction in tarrif…..,but, we as tax payers will carry on paying relentlessly, and ignorant of the fact that Eskom is over recovering on all levels paying bonuses, we have no power to effect change…unfortunately.

Average annual salary at Eskom, R632k!!! No wonder they need these ridiculous increases, aside from the poor budget planning and the missed realisation that coal power is not sustainable. Worse still, there future plans include nuclear when most nuclear powered nations are moving away from it, but we can’t stop the ol gravy train….or can we. Solar has now reached grid parity, so albeit that we can’t get any credits from Eskom yet for surplus power, shouldn’t we all be deploying solar at least for a portion of our own consumption. If you run the numbers, you will see that solar amortises in between 4 to 8 years and delivers a better return iro. savings than any typical investment including the JSE, SATRIX, 30 day call account, property index etc. Better still, most major banks are now considering offering funding for commercial or domestic solar rooftops, so what you save in Eskom bills will pay the monthly instalment. No brainer to me and you can add a back-up component for the load-shedding we no longer have. We now call these power outages, maintenance, cable theft anything but load shedding. Political expediency and semantics to an ignorant electorate.