‘No certainty’ of discussions towards new agreements.
By Antoinette Slabbert 4 Oct 2017  00:52 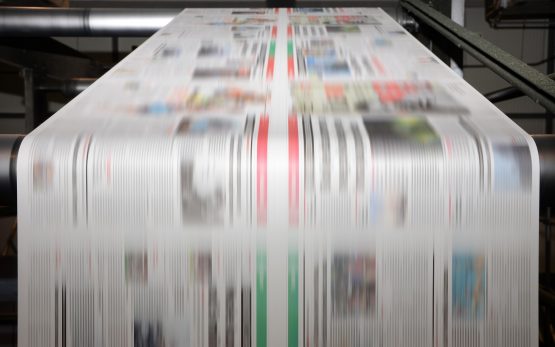 Novus’ share price dropped by 1.5% to R6.50 by midday on Tuesday. Picture: Shutterstock

JSE-listed printing company Novus has been given notice that its substantial printing agreements with Media24 will be terminated by the end of March next year.

In a notice to shareholders Novus further warned: “There can be no certainty that discussions will be commenced or that new printing arrangements will be concluded.”

In its pre-listing statement issued before its listing in March 2015 Novus stated that the contracts represent 31% of its total revenue. Earlier this year Novus CEO Keith Vroon it had fallen to 25%. In its 2017 Annual Report Novus mentioned these contracts in discussing “concentration risk as a result of over-exposure on a few clients”.

It is not clear what the contribution of the contracts are to Novus’ profit. The group reported R256 million attributable profit in the year ended March 31. This reflected a R360 million contribution from the printing segment that compensated for the substantial loss in the “Other” segment.

The termination of the contracts follows a lengthy saga that resulted in the Competition Tribunal approving the merger between Novus and Media24 on condition that Media24 unbundles Novus to its holding company, Naspers.

This came after the Competition Appeals Court agreed with Novus competitor Caxton that Novus and Media24 should have notified a merger before listing Novus. Media24 listed Novus only after abandoning an earlier merger application during which Caxton intervened and put the spotlight on the Naspers control structure.

The earlier merger and thereafter the listing was aimed at facilitating former chairman, the late Lambert Retief’s, exit upon retirement.

Retief passed away in January and as a result exited the management agreement with Media24 and Novus. The two companies interpreted this as a signal that Media24 could embark on the termination of the printing agreements. Novus gave notice to shareholders that the companies were renegotiating the agreements.

The JSE however intervened due to a lack of disclosure in the pre-listing statement that the contracts depended on the life of Retief. Novus then made a U-turn and stated that the management agreement would continue without Retief and Media24 “waived” its right to terminate the agreements.

In the meantime the unbundling of Novus from Media24 was done and Media24’s representatives on the Novus board resigned on September 29 in accordance with the Competition Tribunal’s order.

On the same day Media24 gave six months notice that it will terminate the printing agreements by March 31.

While little detail of the printing contracts is known, it is widely thought that the contracts were onerous on Media24 and very profitable for Novus.

”Beware the Ides of March”

They now seem determined to move on, in line with ”business plans”

As usual the comments tell the real story behind the story.

Should investors be concerned about Naspers’ control structure?

Should investors be concerned about Naspers’ control structure?