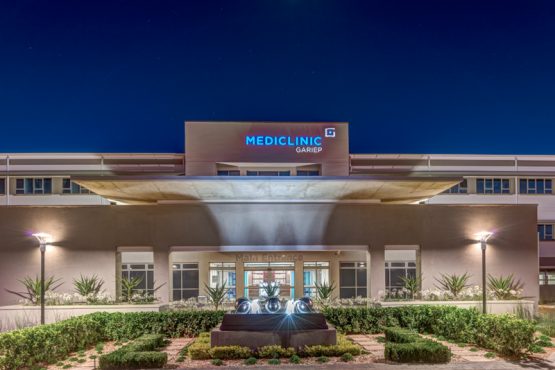 The group sees ‘the big long term trends’ such as an ageing population and increasing lifestyle diseases as opportunities for growth. Image: Supplied

Mediclinic International said in a trading update a few weeks ago that shareholders could expect good results. Management mentioned a bunch of figures at the time, which saw the share price jump more than 10% on the day.

The figures show that Medicinic is nearly back at pre-Covid-19 levels and starting to enjoy the benefits of its expansion drive and a host of new projects that were completed recently.

After the presentation of the figures, group CEO Dr Ronnie van der Merwe outlined Mediclinic’s strategy going forward, saying that Mediclinic has continued to advance digital initiatives and is investing across the continuum of medical care to lay a solid foundation for future growth and innovation.

Van der Merwe pointed out that revenue at all three of the group’s divisions is higher than before the pandemic disrupted normal operations. Management expects that operating margins and earnings will recover to normal levels soon.

The income statement shows that margins have already improved – from 12% a year ago to nearly 16%, just short of the 16.6% before Covid-19 disrupted the world.

Operating in a more normal environment meant the small increase in revenue translated to a healthy 45% increase in Ebitda (earnings before interest, tax, depreciation and amortisation) – which increased to £247 million (from £171 million), while adjusted earnings increased by a massive 373%.

“Our recovery in the first-half is highly encouraging, but above all else, we are pleased with how we have continued to navigate the pandemic and safely treat patients through our diverse healthcare offering,” says Van der Merwe.

“Naturally, the pandemic impacted each region in which we operate differently and, accordingly, the speed and nature of their recoveries have also varied.”

Mediclinic CFO Jurgens Myburgh noted during the discussion of the results that the third wave of Covid-19 infections in SA was more severe than the previous two, and lasted longer.

“We treated a significant number of Covid-19 patients in SA, at times more than 20% of our patients,” he said, notably referring to an “ongoing” pandemic.

Costs associated with the pandemic remain high, with Myburgh saying that in the group’s local operations they amounted to R150 million.

Mediclinic’s other divisions are further along the road to normal operations.

Van der Merwe had some more good news for shareholders – the results for the full financial year are set to be better than previously anticipated.

“However, we remain alert to the ongoing pandemic and potential subsequent waves which provide an element of uncertainty as to near-term operating performance and the shape of the recovery.

Management is also optimistic about the longer term, with Van der Merwe saying the group is poised to take advantage of big long term trends, such as an ageing population and increasing lifestyle diseases such as obesity and diabetes.

The figures are staggering.

The number of people suffering from diabetes will increase to 642 million, while the prevalence of obesity has nearly tripled between 1975 and 2016 (based on figures from the World Health Organisation).

“By 2030, it is estimated that 56% of the global disease burden will be due to chronic diseases,” says Van der Merwe.

Mediclinic is also reacting to the trend of digitisation of just about everything in every business.

It recently launched a digital app, My Mediclinic 24×7, which gives people the ability to search for a doctor by location or speciality and make their own appointments.

Consultations can be either face-to-face in the doctor’s rooms or through a digital consultation – the modern version of the traditional ‘house call’.

Van der Merwe says the digital offering will be enhanced over time.

Read: Mediclinic opts for own power too

As mentioned, the share price got a boost from the figures in the trading update a few weeks ago, and the actual results saw the share unchanged just before the market close on Thursday.

The current price of around R70 is only 10% lower than its recent high and represents a solid recovery from the March 2020 low of around R50.