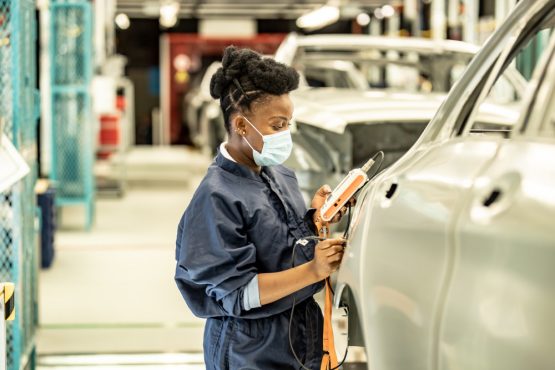 The move has brought welcome new jobs to the Eastern Cape. Image: Supplied

Mercedes-Benz Cars has invested a further R3 billion in South Africa to boost its investment in the country to R13 billion for the production of the new generation C-Class at its production plant in East London.

Jörg Burzer, the member of the board of Mercedes-Benz Cars responsible for production and supply chain management, announced the investment on Thursday at an event at Mercedes-Benz South Africa’s plant in East London to celebrate the commencement of production of the new C-Class.

The company announced the initial R10 billion investment in South Africa at the Presidential Investment Summit in 2018.

Burzer said South Africa is an important location in the global Mercedes-Benz production network and the new C-Class is only being built in two other plants, Bremen in Germany and Beijing in China.

“With our additional investment of R3 billion in the East London plant, we underline our commitment to contributing to the South African economy and the Eastern Cape region,” he said. Jörg Burzer, member of the board of Mercedes-Benz Cars. Image: Supplied

Burzer said Mercedes-Benz has 4 000 employees in East London and an additional about 600 new jobs have been created by the investment.

The investment has also secured or created 2 000 jobs in Mercedes-Benz’s supply base in South Africa.

“This underlines how important the investment is that we have made in East London,” he said.

Minister of Trade, Industry and Competition Ebrahim Patel said the launch of the new C-Class positions Buffalo City and the rest of Eastern Cape to continue its legacy of advanced manufacturing.

“Through the South African Automotive Masterplan, and the Automotive Production and Development Programme, we have created a platform for investment in the industry, deepening our technological expertise, creating local value chains and securing jobs,” he said.

Patel added that the outlay of the first R10 billion investment showed Mercedes-Benz that they could get greater levels of flexibility in production in the East London plant with further enhancements.

“They are doing about 200 variants of the standard C-Class model, which is quite extraordinary for a plant of its size,” said Patel.

He added that the investment by Mercedes-Benz is very significant for East London because of Mercedes-Benz’s job creation projections.

“Mercedes-Benz is the biggest industrial private sector employer in Buffalo City and the eastern part of the Eastern Cape has historically faced deindustrialisation pressures.

“So the effect is to provide stability for the existing jobs. In addition to that are the new jobs,” he said.

The automotive sector remains one of the most visible sectors receiving foreign direct investments, according to the AIEC.

It said that in 2020 the seven OEMs invested a record R9.2 billion while the component sector invested R2.4 billion.

Mercedes-Benz South Africa CEO and executive director of manufacturing Andreas Engling said the previous C-Class was exported from South Africa to 80 countries but the export destinations for the new model will increase to about 110 countries around the world. The investment was used to modernise the East London plant, which has been designed for higher capacities and features more than 500 digitally enabled robots.

A new body shop has been built at the East London Industrial Development Zone, where vehicle parts for the New Generation C-Class are manufactured, to allow the East London Plant to increase volume outputs, optimise the assembly line and achieve commercial synergies.

Burzer declined to comment on the production capacity of the East London plant or the volume of C-Class units exported because this is competitively sensitive information.

However, Engling said about 650 000 units of the previous generation C-Class were produced in East London during the seven-year lifecycle of this model.

“This underlines how important this location is for production work and also for export to the United States of the C-Class sedan,” Burzer added.

It said the total value of automotive exports declined last year because of the impact of the Covid-19 lockdowns by 12.9% to R175.7 billion from the record R201.7 billion in 2019  – but still accounted for 13.9% of total South African exports.

He said Mercedes-Benz SA experienced a huge Covid-19-related dip in production last year but “came back nicely in the first quarter of 2021”.

He said the plant will be increasing its production volumes until the end of this year, starting on a two-shift system from June 24 and the plant moving back to a three-shift system by mid-October.

Engling said local content in the new C-Class will increase from the 35-40% in the older C-Class model because the South African Automotive Masterplan envisages localisation of about 60%.

“That is not really an easy [task]. It takes time but we are increasing localisation now for the new model.

“The IDZ property is now occupied 70-80% by suppliers, which shows we are 100% committed to the Automotive Masterplan,” he said.

Engling said Mercedes-Benz SA also has a “late localisation” project, which involves getting more parts localised during the lifecycle of the model.

With its Ambition 2039 plan, Mercedes-Benz is striving for a fully networked and completely CO₂-neutral vehicle fleet in less than 20 years and aiming to have plug-in hybrids or all-electric vehicles make up more than 50% of its sales by 2030.

He said Mercedes-Benz wants to be flexible because it does not know how electric or hybrid vehicles will ramp up in South Africa, especially in a location that is exporting heavily into different markets.

However, Burzer said a hybrid variant will be introduced later this year in South Africa.

Engling added that if the demand for hybrid variants increases, the plant will be able to produce 100% hybrids on the line.

“We have one line but that is a full flex line and on this line we can produce every single variant and model,” he said. The new C-Class, pictured at the production-commencement event in East London on Thursday, will be built in just three countries: SA, Germany and China. Image: Supplied

This is brilliant and very exciting news for South Africa. R3bn is no small number. Thank you Jorg and your dynamic team. We appreciate this investment and for believing in South Africans! We are a dynamic nation and will make you money. Thank you.

After export incentives paid by the government to Mercedes the benefits are not that big for the country. So MB is not doing this for love-they are doing it for the AIS benefits, huge wear and tear tax allowances on plant and equipment and a punt on the ZAR being weaker over the next few years.

No charity from a multinational in an uber competitive space!

Have you submitted your job title to Luthuli House yet?

Gutsy on their part

With EWC looming, and the ANC the cause of a failed state with over R trillion stolen, hats off to MB

If the ANC were just half the party Mandela dreamed of, there would be 50 MB’s doing the same..No good investing if the brain drain is divesting and leaving SA

And then we’ll take your plant without compensation because it’s in the public interest. Oh, and your intellectual property too.

Welcome to south africa where we loot and steal with impunity

You got it wrong. The reason why the Merc C-Class is build here, is there a strong market from the corrupt cadres connected to the ANC elite 😉

Great news! Our automotive industry development plans (including the forthcoming Automotive Masterplan) seem to be one of the most effective bits of economic policy of the last two decades. US states have to promise auto manufacturers decades of zero taxes and other incentives to keep their plants going and manufacturers have long since departed countries like Australia and yet we are still going strong and are seemingly also competitive with Eastern Europe.
Having said that, it would be nice to see a knock on effect on the area around the plant in East London – when driving the stretch from the plant to central East London the whole place looks very run down.

Completely dwarfed by the R25B that is stolen from municipalities annually. The ANC integrity committee is still mulling over this while the NPA and courts are too busy going after a taxpayer wanting to repatriate some funds to SA.

A multi-national won’t do anything that is not hugely profitable for them and the government. This is not community investment, it is capitalism.

…but the Stalinist anc / eff comrades just don’t and will never understand the nexus as long as the state buys them a Wabenzi!