Old Mutual: ‘Moyo won’t be returning to work in the interim’

This is despite the high court dismissing Old Mutual’s application for the declaratory order that prevents Moyo from resuming his CEO duties.
Ray Mahlaka 6 Sep 2019  12:33 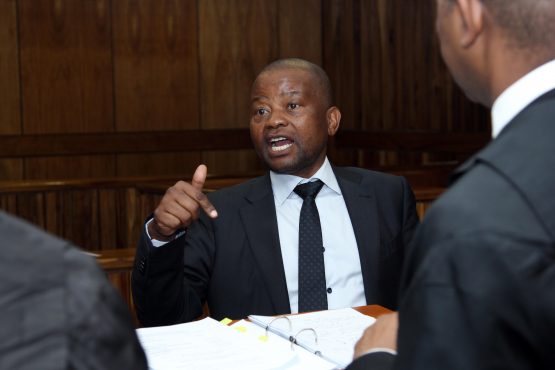 Moyo’s lawyer has said he'll be at Old Mutual on Monday. Image: Moneyweb

Another showdown looms on Monday between Old Mutual and Peter Moyo, as to whether he can resume his duties as the insurer’s reinstated CEO.

Old Mutual said on Friday evening that Moyo will not be returning to work despite the Johannesburg high court dismissing the insurer’s application for a declaratory order that seeks to prevent him from getting his job back.

In a statement, the insurer said Moyo has not challenged the contractual validity of his second firing on August 21 – thus he “will not be returning to work in the interim.”

Meanwhile, before the insurer issued its statement, Moyo’s lawyer Eric Mabuza said: “you’ll find us at Old Mutual on Monday.”

On Friday, Judge Brian Mashile dismissed Old Mutual’s application for a declaratory order – under section 18 (1) of the Superior Courts Act – regarding whether Moyo could return to work, until the conclusion of an appeal against a July 30 judgment that temporarily reinstated him as the insurer’s CEO.

Old Mutual argued that its appeal application against the judgment immediately suspends its implementation and until this process is completed, Moyo was not allowed to return to work. In the same court proceedings on Friday, Mashile granted Old Mutual leave to appeal the July 30 judgment. Old Mutual said it will release a statement later on Friday in response to the court’s decision.

The dismissal of Old Mutual’s declaratory order application “in its entirety” on Friday means that Moyo’s reinstatement has been upheld, pending the conclusion of an appeal process. In other words, it’s another victory for Moyo, who has been involved in a nasty punch up with Old Mutual for nearly three months to get his job back.

Moyo was initially suspended on May 23, hours before the insurer’s AGM, due to “a material breakdown in the relationship of trust and confidence”.

Old Mutual subsequently fired Moyo on June 18, accusing him of wrongfully pocketing dividends worth R30 million linked to NMT Capital, an investment holding company he co-founded, and in which Old Mutual holds a 20% stake.

In his 16-page judgment, which also ordered Old Mutual to pay costs related to the declaratory order application, Mashile said the insurer has not satisfied the “heavy onus” to establish that it “will suffer any irreparable harm” by reinstating Moyo.

In addition to the request for a declaratory order, Old Mutual also wanted the high court to declare that the July 30 judgment is final. Mashile ruled that the judgment is interim and that the court is “not at liberty” to declare it final.

Old Mutual argued that if Moyo is reinstated, it would cause harm to the insurer because its relationship with him has broken down. Moyo argued that Old Mutual will not suffer any harm.

Mashile also found Old Mutual has caused irreparable harm to Moyo. “Other than the humiliation of being ejected from his office, the irreparable harm is plain for every day that he spends at home without work regardless of whether he has been paid for sitting or not. That harm persists until such time that the interim reinstatement is executed and operationalised,” he said.

He also affirmed that Old Mutual is “permanently” interdicted from appointing another CEO “no matter the outcome of Part B” of Moyo’s application. In Part B, Moyo is seeking to declare Old Mutual’s 14-member board, including Chair Trevor Manuel, to be delinquent directors under the Companies Act. The application might be heard in October.

Moyo still wants to have the conduct of Old Mutual’s board declared to be in contempt of court for “failing” to comply with the July 30 judgment.

Hehehehehehe, I want to be at Old Mutual’s head office this Monday. I am sure Mr. Moyo is in the mood for payback. The OM board should probably stock up on Panados and Vaseline.

Why the vaseline? Haha

give the man the one corner office in Sandton & the one in Pinelands!!! & parking bays…. let the other brass sweat out – they made the screw-ups!!

there will be bomb scare again at OM head office

Do grow up children, we have enough drama in our country without your childish spats!

Can someone please be declared a deliquent director already…. the suspense in this movie!

This is getting more and more entertaining with each judgement call.

Will be hugely entertaining and thoroughly deserving if the court declares the whole OM board delinquent.

And then the shareholders can demand repayment of any and all bonuses they received.

Screwed by their own directors. Instead of them screwing their naive customers?

I’ll be bringing the popcorn to OM HO in Sandton on Monday hopefully get a front row seat – maybe bring along my 3D glasses !

Hasn’t Moyo made enough money at Old Mutual to get out, settle down and enjoy his riches, or does he want his lawyer to take it all.

A bit like watching little kiddies arguing I the playground.