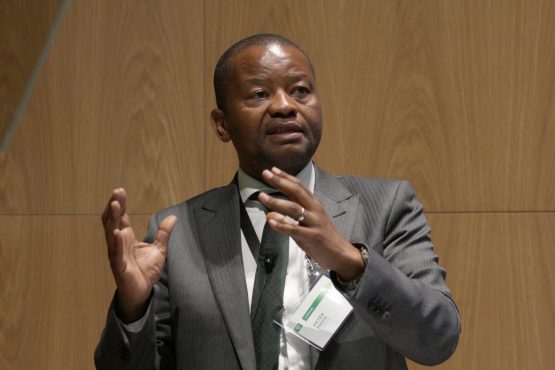 Peter Moyo lost out on R68.4 million in share options when his employment at Old Mutual was controversially terminated over an irreconcilable conflict of interest last year.

Just over R13 million of the former CEO’s options were deducted from his 2018 remuneration package, previously valued at R50.5 million but restated to R37 million in the group’s latest annual report.

During the insurer’s AGM on Friday Itumeleng Kgaboesele, chair of the remuneration committee, assured shareholders that Moyo had not received any termination benefits and none were under consideration. Moyo’s total remuneration package in 2019 was R10.2 million, which included just over R1 million as payment in lieu of leave.

The group’s annual report reveals options that had been issued to Moyo as part of his long-term incentives in 2017, 2018 and 2019 – which had been due to be taken up in subsequent years – lapsed when his employment was terminated.

Moyo is also facing a hefty legal bill following the high-profile court action he took against Old Mutual after he was suspended and then fired by the company. To date judges have awarded cost orders against Moyo in two of the cases.

Old Mutual chair Trevor Manuel told shareholders on Friday that the board could not yet say what the full cost of last year’s legal battle with Moyo had been, as the matters had not yet been finalised. “There are two parts to what it costs, on the one hand no company wants to be in the press for reasons of litigation but it was a set of circumstances we found ourselves caught up in.”

Manuel said the legal battle was not something the board chose: “We couldn’t abandon it because we knew we stood on very firm legal grounds … the initial decision to suspend and then terminate the employment of the former CEO was done on very very firm ethical grounds.”

The group’s legal counsel Craig McCloud added that once the legal battles are finalised: “We will proceed with steps to recoup our costs.”

And so for the second year in a row the dark shadow of the former CEO hung over the insurer’s AGM with much of the discussion between the board and shareholders related to the “Moyo debacle”.

Concerned investors were keen to know what steps had been taken to ensure there would not be a repetition of the court battle that dominated media coverage of the group for much of 2019.

“The last year was very very difficult for all of us and I’m sure nobody, not a single member of this board, would want to relive the difficulties we lived through during that period,” said Manuel. He explained that the current Old Mutual board had been appointed in 2017 and had inherited the Moyo governance issues.

“Apart from maintaining a committee called the ‘related parties transaction committee’ this board will make very sure there is in fact a very clear separation between the interests of employees and directors and those of the company.”

The group’s lead independent director Peter de Beyer told the meeting that Old Mutual had made an investment in Moyo’s company, NMT, years earlier as part of its commitment to black economic empowerment.

“When we recruited him as CEO [in 2017] we were very mindful of the potential conflict. At that stage our view was that NMT was a reasonably mature entity and that the special provisions we put around managing that conflict would be sufficient.

“With the benefit of hindsight that did not prove to be the case but this is a special circumstance and not one likely to be repeated,” said De Beyer.

“Certainly,”  he added, “in terms of ensuring that all the related-party interests of directors and employees – particularly senior employees – that is well in hand.”

Put director’s through a governance test and make BEE broad based not just the CEO.

Even more the point.

This is the very much the problem in South Africa.

I dont see the point of enriching Zimbabweans in this country while the locals (even if they are white) who have the potential are left on the side lines.

I understand… its a numbers game… all corporates are doing this…. Thanks Corporates…. you not doing any good to this country.

I am very happy to hear OM got a sting from this guy!

This level of payments for a CEO is disgusting. Remind me to avoid anything to do with OM.

This fellow needs to go away. We are tired of his shenanigans.

Really! If OM had followed the correct protocols and prevented an obvious conflicts of interest this would be a non issue.

Moyo was way too light for the job at hand ,and seldom was seen or heard of during his tenure at OM.I can only imagine the chaos that would have ensued if he was still in charge during CO-VID.Chasing his bonus when business has come to a grinding halt.Fortunately he was found out at a relatively early stage.Some of his interviews following his court appearances was a complete embarrassment .Walk away Peter

A note to all those middle managers and juniors who get fired or unfairly dismissed fighting the big boys in court is rarely successful. You end up with your reputation tarnished and footing a massive bill. If Moyo couldn’t win a case ..who can?

Totally agree, often the most incompetent business leaders “dismiss” staff on a personal whim, and yes, non executive boards are the worst at this. Time for them to be held accountable too.

Can’t be that ‘unfair’ if you can’t even convince a Labour court of that.

Me Me Me, puleeez I want this job. What a jol, mess things up, take no responsibility and still get paid millyons.

What is so precocious about CEO’s to be awarded all that money. When the CEO’s branch out on their own they often struggle.

When the number two has to step in they usually do a fair job at a fraction of the cost.

Who is responsible? Institutions like the PIC, OM and Sanlam repeatedly vote for these CEO’s.

I love the way Peter de Beyer tells us that ‘ special provisions were put in place to manage the conflict ‘ but they did not work. Of course he does not say what those “special provisions ‘ were. I wonder if conflict of interest was really understood when the appointment was made? By the way, how is de Beyer an independent director having been employed by Old Mutual for many years in a number of senior positions?