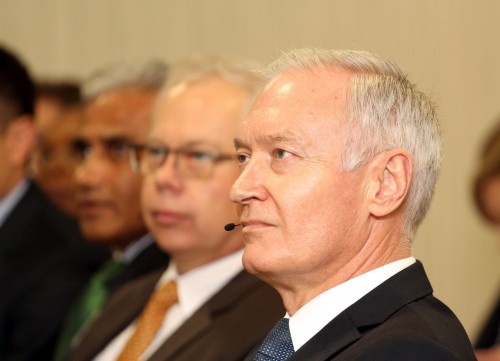 Murray & Roberts (M&R) CEO Henry Laas told Moneyweb on Thursday the company is very aware of the “astronomic impact” of Wednesday’s bridge collapse on its reputation.

On Wednesday the pedestrian bridge that the company was building over the M1 highway, near the Grayston Drive off-ramp in Sandton, Johannesburg, collapsed, killing two and injuring more than 20 people.

M&R came under fire for the way it dealt with the crisis on Wednesday night from media commentators, trade union federation Cosatu, and the ANC. The ANC said in a statement on Wednesday night: “We believe that big construction companies should have the technical capacity to circumvent such occurrences. We must not allow negligence of those human lives for profits.”

Laas said the aftermath of the disaster was “very difficult to manage.”

He said he was at the M&R head office in Bedfordview when he got first notice of the incident that occurred shortly after 15:00.. The company immediately sent its directors responsible for safety and the civil business to the site and he went there later, after setting up a crisis management team.

He said due to the traffic build-up it was extremely difficult to reach the site. Emergency services were still trying to free trapped motorists and controlled the site until about 23:00.

In light of the fatalities, the Department of Labour started its investigation on Wednesday night and cleaning up the site started immediately after the department gave the go-ahead.

Laas said indications are that the road may be re-opened in time for the afternoon peak on Thursday.

M&R will do its own internal investigation to determine the cause of the incident and has appointed a forensic engineer and expert investigator in events of this scale, Laas said. Further appointments will be made if a need is identified for specific expertise.

“Unfortunately it will take time, but we will find out what caused the collapse”, he said.

In a statement released later on Thursday, M&R said it is closely cooperating with other investigations initiated by the Department of Labour, the City of Joburg, the SAPS, and other parties. “The investigations will include analysis and research conducted by technical, engineering, legal and forensic specialists. At this point, we are unable to comment on how long the investigations will take and when they will conclude and we appeal to the public to await the outcome. We are as concerned as everyone to understand what happened, and commit to sharing information as soon as the investigation is complete.”

The Engineering Council of South Africa (Ecsa) states that it appointed a team of experts on Wednesday to conduct an “inspection and preliminary investigation with the intention to establish whether the said collapse was due to an act of negligence/malpractice by an Ecsa-registered person and also ascertain if such an act was in contravention of the Ecsa Code of Conduct.

“If after an investigation, any Ecsa-registered person is found to have breached the Ecsa Code of Conduct, Ecsa will take disciplinary actions against the guilty party.”

Regarding the criticism about M&R’s public handling of the event on Wednesday, Laas told Moneyweb the company’s first priority was to ensure people trapped on the scene were freed. Thereafter it ensured the crisis management team was established.

After visiting the scene on Wednesday night he went to the hospital to visit the injured and will do so again later on Thursday. Laas said the company is working with the City of Joburg to get the contact detail of family members of the deceased.

With regard to communications, M&R issued four statements on Wednesday night, informed the investor community of the events through a Sens announcement on Thursday morning and will be issuing updated statements during the course of Thursday. “I have personally done 25 to 30 media interviews so far,” Laas said around 10:00 on Thursday morning.

He said the company is very aware of the “astronomical impact” of the event on its reputation and it has appointed “professional people” to assist it.

Laas said market conditions have been very difficult since he took the helm at M&R early in 2011. While the company has been stabilised operationally and returned to profitability, investors cannot see where future growth will come from.

He said internationally the oil and gas market is suffering. The group also operates in mining, which is affected by low commodity prices, while there are few opportunities in the local market.

Laas said M&R however has confidence in its strategy, while appreciating that it operates in a cyclical market.

Typical ANC “lives for profit”. What kind of morons are these guys. M&R is a top engineering company anything could have gone wrong as it can with anything. Lets wait till the investigation is complete before accusations are made. Condolences to the deceased families.

This Monkey & Robbers (M&R) a shocking construction company cutting corners to save costs. Injured parties should sue the company to the hilt. Nothing but negligence. Sorry…Monkey and Robbers not on my portfolio.

Why not wait for the outcome of the investigation instead of making premature and insulting remarks?

It could be the fault of the scaffolding of course but as far as M&R goes the correct time to appoint a competent engineer is before the structure is built NOT after it falls down.