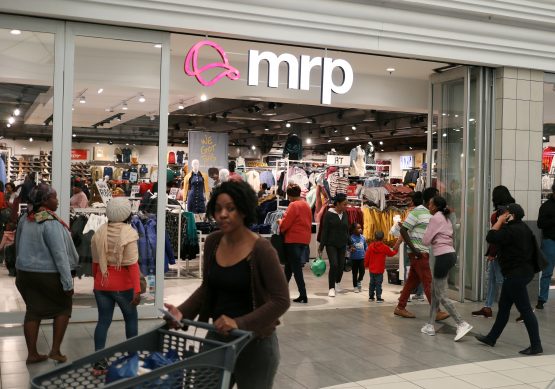 The group kept its credit approval rating for the full year at 33.1%. Image: Siphiwe Sibeko/Reuters

JSE-listed apparel and homeware retailer Mr Price reported a 54% jump in credit applications and a 23.6% rise in credit sales to R3.7 billion for the year ended 2 April 2022, this as new customers show greater appetite for credit and existing customers spend more.

Despite the spike in credit demand as more consumers face persistent cost pressures, the retailer says considering the tightening credit environment, it remains cautious and committed to keeping its credit approval rate within the group’s tolerance levels. The credit approval rating for the current period was kept at 33.1%.

In line with this, the group say it has no plans to roll out credit options to its newly acquired businesses, Yuppiechef and Power Fashion, yet or at least not in the next year.

“Yuppiechef on the other hand, with an increasing margin business, with a higher-end and high-income customer – that is potentially an area that we could look at credit …

“Although that may be an opportunity down the line, I can safely say that for the next 12 months it is not on our radar to bring huge credit to that business,” he adds.

FNB Wealth and Investments portfolio manager Wayne McCurrie tells Moneyweb that in the current inflationary environment – although Mr Price is a largely cash-based business – it will be wise to keep an eye on the group’s credit sales numbers going into FY2023 as more consumers may start using credit as a crutch to supplement dwindling cash.

“Look, you’ve got to be very careful issuing credit now because consumers might afford it but interest rates are going up and you could come under pressure,” McCurrie says.

Cash sales made up 86.1% of group retail sales at year-end, with the group maintaining a 26.4% growth in cash sales. Selling a total of 276 million units during the period represents a 35.3% rise on the previous period.

The fashion retailer announced its plans to open 500 Power Fashion stores across the country by 2026. Mr Price acquired the value retailer brand, which was initially based in Durban, in November 2020.

So far, the group has opened 36 new stores during the period, increasing the value fashion retailer’s visibility by 20.6%.

According to analysts, Mr Price has set a very ambitious target for itself given that the brand exists in a very competitive segment of the market, having to compete with giants like Pepkor’s Pep and the Ackermans brands as well as The Foschini Group’s Jet brand.

“I must admit, I gulped a little when I heard 500 because basically, they are planning to double the number of stores – which I think is very ambitious,” Sasfin equity analyst Alec Abraham tells Moneyweb.

Expressing similar sentiments, McCurrie says: “That is very ambitious, 500 stores is a big number. But I trust Mr Price’s management, you know – they’ve proven themselves over and over again over many years making sound decisions.

Going into the new financial year, Mr Price says it expects many of the challenges it battled in FY2022 – like global supply chain disruptions, rising inflation, and interest rate hikes – to persist and place further pressure on the business and the consumer.

The group adds that it expects to see single digit product inflation in the 2023 period.

When excluding its acquisitions Power Fashion and Yuppiechef, the group managed to contain its selling price inflation at 5.5%.

Despite the challenges the group faced during the period, it maintained strong earnings growth, with headline earnings per share (Heps) for the full year ended April 2022 increasing by 20.1% to 1 282.1 cents.

The retailer declared a final dividend of 524.9 cents, 13.4% higher than that of the previous year.