Brought to you by Naspers/Prosus

Naspers and Prosus forging ahead

Investors continue to demonstrate trust and patience, but are not willing to pay too much.
By Adriaan Kruger 23 Nov 2021  00:07

Those holding shares in the companies seem to be looking forward to the success of their new ventures a few years from now. Image: Bloomberg

Naspers and Prosus announced strong growth in the six months to end-September 2021, with both increasing revenue by 29% and trading profit by some 8%.

This growth was mainly driven by continued expansion and consumer acceptance of food delivery, which saw revenues increase by 86% to $1.3 billion (around R20.6 billion) in the six months under review.

Unfortunately, it is taking longer than some investors were hoping to translate the investment in the “next big trend” into profits. The food delivery business reported that trading losses increased by 55% to $312 million compared to the same six months of 2020, according to the figures presented by both Naspers and Prosus.

However, management remains optimistic, saying that the increase in trading losses merely reflects the increased investment in complementary services to food delivery and customer acquisition costs, and the increase in the interest in Delivery Hero.

“Operating margins in the food delivery segment improved meaningfully, by 6 percentage points, as the business benefited from increased scale,” according to management’s commentary to the results.

It goes on to discuss the different businesses within the food delivery segment, such as Swiggy, which reported a strong recovery through the first half of the financial year.

The figures are astounding. The number of orders grew 83% to 1.4 billion and the gross value of these orders by 86% to €16.2 billion during the last six months.

That equates to more than R287 billion worth of eat-at-home pizza, burgers and fried chicken.

Meanwhile, the online classified advertisement businesses reported growing profitability. Revenues doubled to $1.3 billion and trading profit increased by 133% to $108 million, according to the Naspers results.

“OLX Group delivered a strong performance versus the same period last year. In well-developed markets, such as Russia, Poland and Brazil, the group accelerated the development of new consumer propositions, such as pay-and-ship services, increasing trust and safety across its platforms and scaling its autos transactions business,” noted CEO Bob van Dijk in his commentary to the results.

The vehicle sales part of OLX – OLX Autos – reported record volumes with 69 000 car transactions on its platform during the period.

A quick calculation shows that this equates to selling (and people buying) 377 vehicles every day, seven days a week.

The end result of the improved profitability in the classifieds interests and the continued good performance of Tencent, countered by investment in new businesses, was that core headline earnings per share declined marginally at both Naspers and Prosus.

Market reaction to the results can best be described as subdued. Investors obviously appreciate the long term opportunities, but seem unsure what to make of this set of results.

The two biggest shares in the JSE indexes fell quite a bit after announcing their results on a day that the rest of the shares on the JSE saw gains overall.

But it is all relative for one of the world’s biggest internet companies.

“Of concern is that the discount in both Naspers and Prosus deepened lately. In all, indications are that the market was not surprised by the results,” he says.

Overall, investors seem willing to stick with Naspers and Prosus, looking forward to the success of the new ventures a few years from now.

However, they price the risks dearly as both Prosus and Naspers are trading closer to 12-month lows than their recent highs. 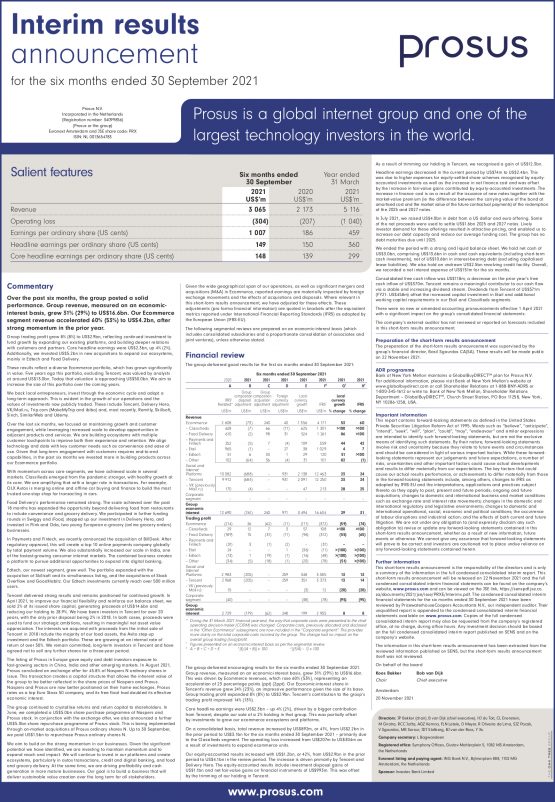