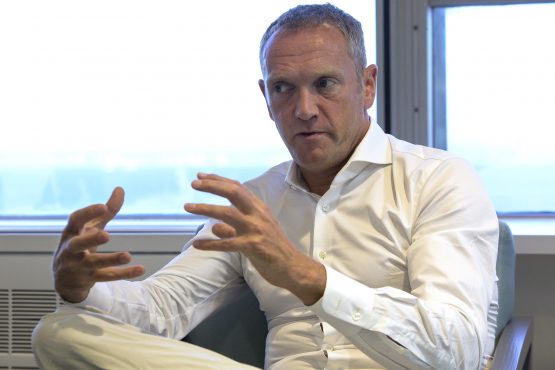 'The amount of data is exploding -- last year we collected more data in the world than ever before,' said Naspers CEO Bob van Dijk. Picture: Moneyweb

Naspers is looking to invest in machine learning as Africa’s largest company seeks to expand following an Amsterdam listing of assets including a stake in Tencent.

The South Africa internet and technology group spent about $3 billion on its various ventures around the world last year, including Indian food-delivery service Swiggy and Russian classifieds site Avito BB. Machine learning — a subset of artificial intelligence — is another area of interest, as is online education, executives said on Friday.

Read: Naspers says it has enough votes to proceed with Prosus listing

“We are interested in investing in machine learning,” chief executive officer Bob van Dijk told shareholders at the annual general meeting in Cape Town. “The amount of data is exploding — last year we collected more data in the world than ever before.”

Naspers has taken stakes in myriad businesses around the world to try and replicate its success with Chinese internet giant Tencent, which it backed as a startup 18 years ago. The growth of that company has helped transform Naspers from its roots as a publisher of South African newspapers, which now makes up about 0.5% of the business.

The spinoff and listing of assets into a new entity known as Prosus is partly to help narrow a valuation gap between the Tencent stake and Naspers as a whole, which is about $125 billion vs $99 billion at current prices. The move is also intended to ease Naspers’s dominance of Johannesburg’s stock exchange and attract new investors, particularly in Europe.

Shareholders voted to support the move immediately after Friday’s AGM. Naspers will retain a 73% stake in the new company, which will also be headed by Van Dijk.

“Since the announcement the discount has already been closing,” the CEO said in an interview after the vote. “Shareholders have been overwhelmingly supportive of the Prosus listing. It will not solve every problem but it’s a positive step.”

Machine learning is the art of teaching computers to perform certain tasks without explicit instructions. “If you think of AI as the planet we are trying to get to, machine learning is the rocket that gets us there,” Pedro Domingos, DE Shaw & Co’s head of research into the subject, said in an online video.

they should just have rented a safe deposit box in Amsterdam for the TenCent share certificates – could have saved a gazillion in boards and auditors and bonuses and a HO with fountains and lofts. Every now and then go and take out a few certificates, sell, pay for the losses everywhere else.

Given the special voting rights, did anybody think this would not be passed???