Unprecedented demand for online services and entertainment during Covid-19 pandemic lockdowns, along with a scramble for haven investments, have helped set South African stocks on course for a record month.

The benchmark index in Johannesburg is up 14% in April as of Wednesday’s close, the most in any month since Bloomberg began tracking the gauge in 1995. Global equity markets are rising as investors assess plans by countries to restart activity and amid signs of progress in treating the coronavirus, but South African stocks have outpaced their emerging-market peers. Naspers has been the biggest contributor to April’s gains, with the Cape Town-based tech investor advancing to record highs as it benefits from its 31% stake in Chinese internet giant Tencent, AngloGold Ashanti and Gold Fields are also among leading market drivers as bullion heads for its best month since 2016, thanks to its allure as a store of value.

“The preference for safe havens will remain for extended periods, even with the increase in optimism, as investors try to preserve capital while participating in the upside we’re seeing,” said Lulama Qongqo, an analyst at Mergence Investment Managers in Cape Town. 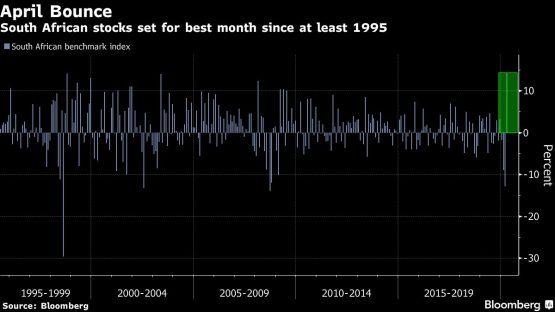 Naspers, up 14% in April as of Wednesday, accounts for 20% of the main index, with other major contributions this month coming from market heavyweights BHP Group, Anglo American and Richemont. In percentage terms, Sasol has surged the most, its price more than doubling as the battered oil producer set out plans to shore up its finances.

I know this could all turn bad again – very soon – but lets see if those who profit from spreading bad news about SA all the time – whilst trying to profit from scaring people and take money off-shore at these punishing exchange rates – report on this.
Ryk, you know who I am referring to.
Buy SOL at 2400 – – – – sell at 9000 – – – good enough for me.

I have to agree with this. Sasol had bad news articles about oil and debt but if there are top 40 companies that’s on top of their debt Sasol is one of them.

Buying Rand-hedged stock like Naspers, Richemont, BAT, AB InBev, BHP Billiton, and Glencore, is the best and safest options right now!
With this in mind, Nathanson says investors should only include JSE rand-hedge stocks in their portfolios if they are high-quality businesses trading at attractive prices – the same considerations that
As expected, the Rand on the move – stronger again – we don’t have to wait and see what is going to happen anymore – the urgency and gravity of the crisis situations (being downgraded and Covind 19) is now apparent. All the ways possible to ‘’supply liquidity’’ if major institutions and Government ran short of cash have now being explored. The markets stopped gyrating wildly despite the fact that shutting down the markets only compounds investor’s pain.
The Treasury managed to put more money into the market and lowering short term interest rates etc. World markets started recovering again although without consolation for the speculators who had lost their shirts or the scores of small brokerage houses and businesses that might still fail.
‘’Boutiques’’ will have their work cut out to try and scare investors (mainly pensioners) again – to invest in all their fancy funds offshore. Some of them quote their offshore yields achieved in 2019 on Twitter etc. – no indication of year-to-date performance yet!
SA’s Sovereign debt market has deepened and transformed over the last 15 years, defying the traditional view of the inability of emerging economies to borrow in their own currency – and thereby shifted a growing portion of their funding to local currency instruments, and thereby managed to be less susceptible to these types (junk downgrading) of shocks. SA might have more debt, but more of that debt is in local currency and the repayment over time is more structured for our economy.
However, the interest repayments on foreign loans were done at much cheaper interest rates. I think the record amount of ‘’stork money’’ that has left sunny SA is behind us now and confirmation that we managed to withstand the outflow – the Rand is starting to recover again. SA has become more dependent on local debt rather than foreign debt, but any IMF, World Bank, and Brics foreign currency loans with boos the Rand massively from these levels.
South Africa’s sovereign debt in foreign currency, is much smaller than most emerging markets and only a small portion of our total sovereign debt, which is large denominated in rand.
The most important factor in investing offshore is the level of the Rand where you enter this market and the level that you want to/are forced to repatriate your investment.

If you plan to repatriate your funds this year, the current USD/ZAR I think will be the best to do, and if you are planning to invest offshore – levels below USD/ZAR 15 will be seen and the best option to buy this year.