Of significance is that the local economy weakened every consecutive quarter in 2019 while the global economy was still performing well. Image: Shutterstock

Nedbank was the first of the big retail banks in SA to illustrate the effect of a slowdown in the economy on a large financial services group.

The fall of nearly 7% in earnings is significant as figures from Statistics SA a few hours later showed that the financial sector was one of only a few sectors that still reported positive growth in the last quarter of 2019.

Of the major sectors, only financial services, mining and personal services could eke out a bit of growth, while the rest of the economy – divided into another seven industries for statistical purposes – all declined. In addition, the financial services sector is also the single largest sector in the economy, representing 20% of all economic activity in nominal terms during the last quarter of 2019.

That such a big portion of the economy is suffering led to a decline of 1.4% in production in the last quarter of last year and reduced growth in GDP for the full year to only 0.2%.

Nedbank CEO Mike Brown described a depressing economic scenario for business in SA during a presentation of the group’s results for the financial year to end December.

Brown, known for his blunt criticism with regards to economic matters, fired off a long list of the economic ills:

It is thus not surprising that Nedbank’s economists have cut their forecast for economic growth in 2020 to only 0.7%.

Finance Minister Tito Mboweni said last week during his budget speech that the official growth forecast for 2020 is 0.9%, but one should remember that government forecasts have proven to be largely optimistic at the beginning of the year. Last year, government revised its initial forecast of 1.4% downwards within months of the original figure and continued to review its figures every few months.

The (nearly) final figure for the whole of 2019 indicated real growth of only 0.2% for the year after the GDP figure for the third quarter was revised from -0,6% to -0,8% and the fourth quarter delivered an ugly surprise in the form of another quarter-on-quarter decline of 1.4%. The figure would have looked even worse if not for the adjustment in the previous quarter.

The figure in the final quarter of 2019 could however still be adjusted as calculations are finalised, and hopefully won’t be even worse.

Momentum Investments economists Herman van Papendorp and Sanisha Packirisamy cautioned clients in an economic analysis that the economy will probably remain weak in the first three months of 2020 as well.

“GDP for the full financial year surprised to the downside at 0.2% relative to consensus expectations of 0.3%. Fragile economic activity in 2019 represented the weakest growth rates since the global financial crisis,” they said.

“GDP declined for two consecutive quarters at the end of 2019, defining a technical recession, with little to suggest that growth will recover strongly in the first quarter of 2020.”

Read: SA is in recession

They announced that they reduced their forecast for economic growth in 2020 to less than 0.5% due to expectations of continued electricity disruptions and the effect of the coronavirus outbreak that is expected to disrupt global production.

Rating agency Moody’s, the most positive of the rating agencies regarding SA and the only one to still put SA government bonds on an investment grade rating, pencilled in growth of 0.7% for 2020, but that might also turn out to be too optimistic if global economic growth falters. And that looks increasingly likely due to the impact of the coronavirus.

The Organisation for Economic Cooperation and Development (OECD) last week cut its global economic forecast further, to only 2.4% compared to the previous forecast of 2.9%. It said it might reduce its prediction further if the outbreak of the virus turns out to be more severe than currently predicted.

Bloomberg reported that falling share prices wiped more than $1.5 trillion off the valuation of international companies during the last week of February due to the perceived impact of the coronavirus on the economy and company earnings.

Digging into the Stats SA figures shows that the economy has grown only marginally since 2014. GDP at constant prices increased by only 4% in total from R3.028 trillion in 2014 to R3.149 trillion at the end of December 2019.

Unfortunately, important sectors as far as job creation goes continued to shrink over the last year.

The worst was the decline of nearly 7% in the output of the agricultural sector, while mining, manufacturing and construction are also still in decline.

Of significance is that the local economy performed poorly and weakened every consecutive quarter in 2019 while the global economy was still performing well, clocking growth of an estimated 3.5% in 2019.

The outlook for the SA economy will be dire if global growth falls to only 1.5% – the prediction if the coronavirus continues unabated. 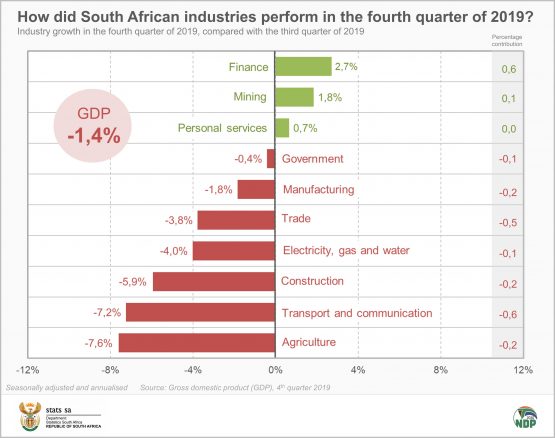