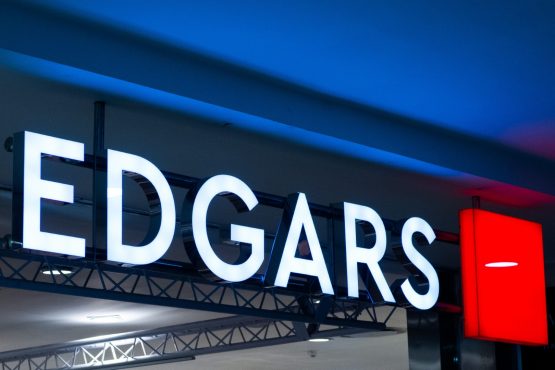 The refreshed Edgars logo will appear on the revamped store in Joburg, which is set to reopen in November. Image: Waldo Swiegers, Bloomberg

Both SA Corporate CEO Rory Mackey and Retailability CEO Norman Drieselmann confirmed this to Moneyweb in response to queries.

It follows Durban-based Retailability last week concluding its purchase of the Edgars chain in South Africa from embattled Edcon as part of Edcon’s business rescue process.

“The new Edgars owners have committed to reopening the Edgars store in our building in the Johannesburg CBD,” Mackey said in response to Moneyweb during SA Corporate’s recent interim results webcast presentation.

“The redevelopment of the building is continuing, with Shoprite set to open on the ground floor shortly, but Edgars is still part of the plans and will reopen,” he added. “Retailability [management] has said that they wish to retain part of the premises there [which was part of Edcon’s plan last year].”

Edgars opened its first store in South Africa in the Johannesburg CBD over 90 years ago (1929) in Joubert Street but moved its flagship high street presence to Pritchard Street, where is has been operating for decades.

The two-floor Pritchard Street store was however closed last year in order to be revamped and downsized to a third of its size as part of Edcon’s broader turnaround plans, under CEO Grant Pattison.

According to Edcon insiders, the store was set to open this April, but the plan was scuppered by the Covid-19 pandemic and then Edcon’s business rescue process.

“We are going ahead with the Edgars Johannesburg CBD store plan,” Drieselmann told Moneyweb. “We wish we could open sooner, but there is still a bit of building work underway due to a combination of delays linked to the business rescue and Covid-19 impact.

“As a mass-market retail chain, Edgars must have a presence in South Africa major CBDs … We are committed to the Johannesburg CBD and will continue to service this important market, through the redevelopment and right-sizing of our Edgars store,” he added.

“The revamped Pritchard Street Edgars store will be around 3 500m2 and we’re planning to have it reopened by November.”

Before its coronavirus-induced business rescue process, Edcon had downsized or closed dozens of Edgars, Jet and Boardmans stores across the country. Its expansive Edgars store in the Durban inner city, located in a landmark property owned by JSE-listed Fortress Income Fund, became one of the high-profile CBD closure casualties last year. Fortress told Moneyweb recently that the property, which is still largely vacant, is now up for sale. Despite the closure, Pattison told Moneyweb at the time that Edcon was looking to still have a presence in the Durban CBD, but in a much smaller retail space (the old Edgars store took up two floors).

It seems the new owner of Edgars shares this view, with Drieselmann confirming that Retailability is “speaking to a few local landlords” in Durban about taking up space again in the CBD.

Edcon’s deal with Retailability sees the fashion retailer and a holding company secure 120 Edgars stores countrywide, while around 5 200 jobs will be saved. The purchase price has not been disclosed as Retailability is not listed.

Retailability already had more than 460 stores across South Africa, Namibia, Botswana, Lesotho and eSwatini trading under its Legit, Beaver Canoe and Style retail chains. It purchased the Legit women’s clothing chain from Edcon back in 2017 for R637 million.

It is likely that the Edgars deal has come as a bargain due to Edcon’s business rescue process. The former retail giant is effectively being split up and sold off. Its Jet chain was sold to TFG two months ago.

Read:
TFG concludes agreement to buy Jet stores
Why TFG’s Jet deal is the bargain of the century

Edgars clothes are cheap and of poor quality…
People can see the crap you sold.
no future here.

The poor mass market is where Edgars should plant itself

Will it be able to compete with Ackermans and Pep? Unlikely

Edgars should have left the scene years ago.

MRP and few others have entered the scene years ago and has become the poor mans friend.

Death cannot be postponed. This is what Edgars is doing. Stop the bleeding. R.I.P. We are sick and tired of this name (Edgars).

Why “must” any particular retailer have a presence in the inner city? Surely you do market segmentation, see whether the profile of the potential clients match your offering, and then decide on the basis of that whether to open your stores in a particular location? Louis Vuitton won’t open a store in Ventersdorp, but will do so in Milan, after all.

Too much competition in this game.its difficult.

Job cuts ahead for African Bank

Job cuts ahead for African Bank