But Aveng-Strabag JV and Sanral are squaring up for a possible court battle over the original contract.
By Roy Cokayne 14 Sep 2021  00:01 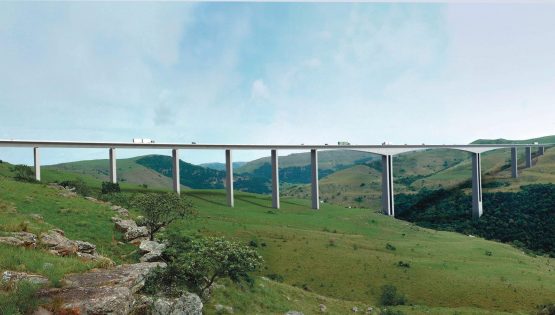 Once complete, the Mtentu River bridge outside Xolobeni in the Eastern Cape will be one of the highest bridges in the world and one of the longest in Africa. Image: Sanral

The new tender for the construction of the Mtentu Bridge on the Wild Coast is under adjudication while litigation remains a possibility to resolve a dispute between the original contractor, the Aveng-Strabag Joint Venture (ASJV), and the South African National Roads Agency (Sanral).

Sanral N2 Wild Coast Road lead project manager Craig McLachlan said the new tender has not yet been awarded but Sanral anticipates appointing a new contractor before the end of 2021.

McLachlan added that the estimated contract duration is 49 months and the project value will be announced when the contractor has been appointed.

However, McLachlan said the scope of the new Mtentu Bridge contract includes additional work that was not included in the original ASJV contract.

Construction on the project by the ASJV ground to a halt in 2019.

JSE-listed construction and engineering group Aveng claimed at the time the ASJV had lawfully terminated the R1.5 billion contract following a force majeure event after civil unrest, commotion, protests and threats of harm had resulted in the joint venture being denied access to the site and the ability to safely continue the execution of the project.

Aveng’s then wholly owned southern African construction and engineering business Grinaker-LTA was a 50% partner in the ASJV, but it subsequently sold Grinaker-LTA to the black-owned Laula Consortium in December 2019 for R72 million.

McLachlan said Sanral and the ASJV have concluded two separate litigation processes to date related to Sanral’s right to call in the performance and retention guarantees.

He said the courts found in Sanral’s favour in both cases, as well as in an urgent application Sanral was required to bring shortly after the contract termination to prevent the ASJV from removing plant and equipment being held on site as additional surety.

McLachlan said Sanral will be in a position to conclude and submit its claim against the ASJV once a new contractor has been appointed for the Mtentu Bridge project.

“As per the FIDIC [International Federation of Consulting Engineers or Federation Internationale des Ingenieurs-Conseil] contract in place, this claim will be assessed by the engineer for the project.

“Should either party contest the resulting determination, there are various routes that may be followed, including referral to the project’s three-[person] Dispute Adjudication Body or alternatively arbitration or court action.

“This is still to be determined by the parties,” he said.

McLachlan added that Sanral has called in and been paid both the performance and retention sureties held, totalling about R270.9 million, to offset the potential additional costs to be incurred by the taxpayer due to the termination of the contract with ASJV.

He said these monies received will be offset against Sanral’s claim against the ASJV.

‘Conversation’ to be had

Aveng Group CEO Sean Flanagan said during a recent presentation on the group’s financial results in the year to June 2021 that Aveng assumes there will be some conversation between the group and Sanral on how they resolve their outstanding disputes once the new contractor has been awarded.

“Clearly we believe that we had the right to terminate our contract and that remains our position. But of course Sanral has a completely opposite view,” said Flanagan.

“Where there is an opportunity for us to sit down and find a resolution, we would do so but we would not do so by putting Aveng at risk.

McLachlan said there currently aren’t any settlement negotiations underway between Sanral and the ASJV, nor any litigation currently pending.

Aveng group financial officer Adrian Macartney confirmed during Aveng’s recent results presentation that the group has recognised the cost of bonds being pulled relating to both the Mtentu Bridge project and The Leonardo contract in Sandon.

“We continue to face litigation there,” he added.

The reference to The Leonardo relates to a notice sent to Aveng in January 2020 by Seventy Five on Maude, which is part of Bart Dorrestein’s Legacy Group, terminating that construction contract.

The Legacy Group also made a call on the R87.4 million construction guarantee procured by Aveng as part of that contract.

Flanagan reiterated that it is always Aveng’s preference to resolve disputes on contracts amicably and without having to resort to litigation.

“Unfortunately, in order to do that, you need two parties who are prepared to engage in a settlement negotiation.

“In the case of [The] Leonardo, that is not the case and so we have a number of disputes which are following their call offs through the contract, which in the first instance is arbitration.

“A number of those matters are either in the process of being heard or laid down to be heard in the coming months. But I think it’s some way off before we have resolution of those issues,” he said.

Flanagan added that the major dispute Aveng had with Eskom was settled in the past year.

This dispute related to the non-payment by Eskom of amounts owing for the Majuba rail project in Mpumalanga.

Aveng confirmed in April 2020 it had in 2019 instituted a R40 million high court claim against the power utility because of non-payment on this contract.

Flanagan said last month Aveng management sees the year to end-June 2021 “as a very, very significant step forward in our road towards returning Aveng to the status it used to hold”.

Aveng reported headline earnings per share of R751 million compared to the R950 million loss in the previous year.

Aveng also reported that it plans to undertake a share consolidation before the end of this year to reduce the more than 60 billion Aveng shares in issue.

The increase in the shares in issue follows several rights issues by the group to repair its balance sheet as part of the strategy to return the group to profitability.

Phew, lots of angry anti-vaxxers who don’t have a bridge guy.

Jipp –Take the scenic route via Bizana. This road will be another Mooi River Toll plaza looting spot

I get it. White business owners lack the ability to mentor and train people of minority. You employed the Bee candidates so you are responsible for their insolence. To bad you didnt take it seriously when you had the ability to do so. So you paved the way for corruption short cuts and lack of knowledge just to blame it on the black person. Shoot yourself in the foot why dont you. Loosers.

Well white execs hired and trained the Bee candidates so I guess they didnt know what they were doing either.

Amazing. Things can only go up from here.

Aveng also had Roger Jardine… and he bailed out!

Suckers at Firstrand picked him up.

Haha suckers. Look whose laughing now. I am.

They never finished either….

You guys know an awful lot about Aveng. Must be investors. I know it’s hard to resist. You rascals.

Please Ballin — climb back in your playpen and go to sleep !!

Will we ever have any development projects that just go according to plan without litigation or corruption?

Surely this is the best way for all stakeholders?

Maybe the corrupt ANC should just award the contract to the ANC’s construction mafia.

Reading this article you can only come to the conclusion that both Aveng and Sanral are incompetent. In my days of project management you had a project plan which clearly set out objectives, time-lines and cost per that timeline – the only way you could change anything was that both parties agree a reversion order. Both these entities are supposed to be professional but there is no professionalism – all these aberrations should have been sorted out long ago, and, it all hinges on a achievable project plan – signed off by both parties

You obviously have not encountered the ANC’s construction mafia arm. I have and it is very difficult to tell an AK47 wielding thug about objectives, time lines, costs and reversion orders. “Signed off by both parties”; good luck!

What could possibly go wrong????