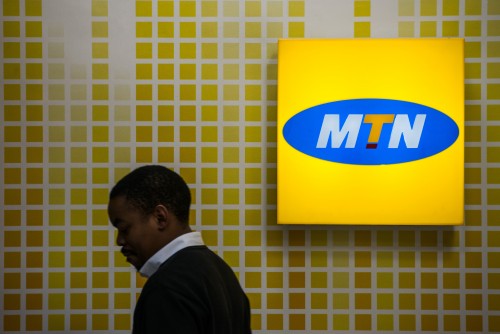 MTN Group shares slumped the most in almost two months after Nigerian lawmakers raised new allegations about the wireless carrier, this time accusing the company of illegally moving almost $14 billion out of its largest market.

Nigeria’s Senate will thoroughly investigate the claim, it said on its Twitter account on Tuesday. The Johannesburg-based company, Africa’s biggest wireless carrier by sales, is accused of repatriating the funds over 10 years starting in 2006, according to Dino Melaye, the politician who proposed the motion. The four banks involved in the alleged illegal transfers are Citigroup, Standard Chartered, and Nigerian lenders Stanbic IBTC Holdings and Diamond Bank.

The accusation comes a little over three months after MTN agreed to pay a 330 billion naira ($1 billion) fine in cash to the Nigerian government and list its local unit on the country’s stock exchange after about eight months of negotiations. That penalty was imposed for missing a deadline to disconnect 5.1 million customers unregistered in the country, which is battling an Islamist insurgency. The stock has fallen more than 37% since the fine was first reported in October, allowing crosstown rival Vodacom Group Ltd. to overtake the company in terms of market valuation.

“It’s not a good thing for MTN that there is a lot of noise being made again around corporate governance,” Sasha Naryshkine, an analyst at Johannesburg-based money manager Vestact, said by phone. “It’s difficult to move money out of the country illegally as it has to be moved through the central bank.”

Nigeria Trade and Investment Minister Okechukwu Enelamah was among people “who MTN used” in moving the funds, according to the motion. His special adviser, Olubunmi Adeoye, didn’t answer calls seeking comment.

MTN shares had fallen earlier on Tuesday after the Nigerian telecommunications regulator blocked the carrier’s attempt to take over internet spectrum owned by closely held Visafone, which it had agreed to buy in January. MTN is trying to add capacity to extend internet access in Nigeria and South Africa as revenue from voice services declines.

“It’s one mess after the other for MTN in Nigeria again today,” Naryshkine said.

This company just can’t seem to get their act together.

If there is smoke there is fire. The chickens are coming home to roost. Years of client abuse and shady deals where ever they go, the wheel turns boys you I trouble.

It’s desperate times in Nigeria now. It’s one shake down after another with MTN. They are just throwing half-cooked spaghetti on the wall and hopes that it sticks, and some people hope to get at least a taste of the untold fortunes that they hope to make from ‘pay offs’. This is less about MTN and more about the greed of politicians in Nigeria, you mean in the whole country there is only one company that gives Nigerian lawmakers sleepless nights? This is targeted attack as the countries budget has become decimated by the fall in crude prices,and the recent settlement on the $5bil fine.