After announcing R3bn investment in its Rosslyn plant for the new Navara pickup last year.
By Roy Cokayne 29 May 2020  11:30 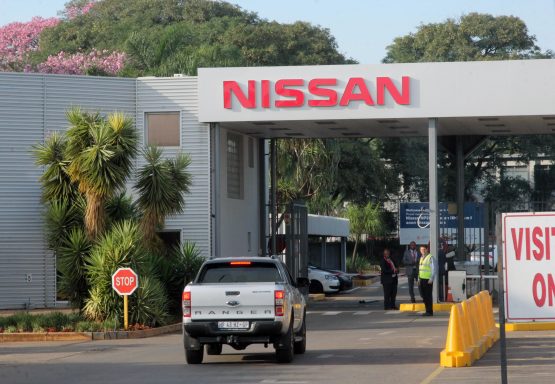 Globally, Nissan is ‘reorganising’ those operations from which it does not expect sufficient returns and ‘reducing excess production capacity’. Image: Moneyweb

The Nissan Motor Company of Japan has unveiled a new four-year transformation plan to achieve sustainable growth, financial stability and profitability. For now, however, it is remaining tight-lipped on its future strategy for Africa, including its South African plant in Rosslyn in Pretoria.

CEO Makoto Uchida said on Thursday the plan involves a focus on Nissan’s core operations in Japan, China and North America, rightsizing its production capacity by reducing it by 20% from 7.2 million units a year to 5.4 million units, the closure of its plants in Indonesia and Barcelona in Spain, reducing fixed costs by about ¥300 billion, and rationalising its global product line-up by reducing its number of models by 20% from 69 to fewer than 55 models.

Uchida said in rationalising the business, Nissan is “reorganising operations from which we do not expect sufficient returns, and we are reducing excess production capacity”.

On the streamlining of Nissan’s product portfolio, Uchida said that by the end of Nissan’s 2023 financial year the company will discontinue older cars and trucks, as well as models unique to a single region.

To improve Nissan’s cost base, Uchida said they are reducing fixed costs and other expenses by 15% to adjust to the size of the transformed business.

“What we are reducing is excess facilities and products from which we expect low future returns, while for the areas in which we will focus, we will continue to robustly invest for steady growth,” he said.

Uchida said Nissan will be prioritising its core markets of Japan, China and North America, adding that in South America, the Association of Southeast Asian Nations and Europe it will maximise the use of alliance assets while developing businesses at an appropriate size as these markets grow.

“In these regions, and also the Middle East, we will concentrate our management resources on markets where Nissan has growth potential,” he said.

Uchida did not mention Africa in his presentation but the continent forms part of Nissan’s Africa, Middle East and India region.

Nissan South Africa was asked to comment on the company’s strategy for Africa, how it has changed as a result of the new restructuring plan, what the company’s plans are for its Rosslyn plant and if the new plan will have any impact on the R3 billion investment announced in April 2019 in the Rosslyn plant for the production of the new Navara pickup.

The company said at the time this investment and the production of the Navara would expand the role of the plant as a light commercial vehicle manufacturing hub for Nissan.

It said the Navara will join its NP200 and NP300 models, which are already built at Rosslyn and sold in the South African market and up to 45 pan-African countries.

Production was expected to commence in November this year and create about 1 200 new jobs directly at the plan and across Nissan’s local supply chain.

“Depending on market conditions, it is anticipated Navara’s arrival will add 30 000 units to Rosslyn’s current annual production volume of 35 000, creating the need for a new, second shift at the plant,” it said.

Veralda Schmidt, manager of media liaison, corporate affairs and communications at Nissan South Africa, said on Thursday that now that Nissan’s mid-term planning announcement has been made, “the local implications thereof will be announced at an appropriate time”.

Schmidt added that preparation of the Rosslyn plant for the new Navara is continuing.

“The final launch time will be announced in due course as we resume full production at our plant in Rosslyn,” she said.

‘Major turning point’ for the industry

Uchida’s announcement of Nissan’s transformation plan coincided with the release of its 2019 financial results via a live webcast to prevent the spread of Covid-19.

He said the pandemic has brought significant changes to everyone’s lifestyles, and the auto industry is “at a major turning point”.

“Covid-19 has deeply impacted financial activities, with this impact also being felt in the automotive industry. Nissan also has its own issues that have combined with these external factors and worsened our financial results,” he said.

Uchida said Nissan’s sales decreased 10.6% to 4.93 million units because of the significant slowdown in total sales in the fourth quarter following the outbreak of the pandemic, as well as the decrease in sales primarily in North America and Europe in the first three quarters.

The net loss also included costs associated with restructuring and impairments of ¥603 billion (98.2 billion) as Nissan focused on restructuring measures to improve the company’s profitability, he said.

For its 2020 financial year, Nissan currently estimates that total global vehicle sales will decline by between about 15-20% from the prior year due to the pandemic.

The Automotive Industry Development Centre (AIDC), a subsidiary of the Gauteng Growth and Development Agency, which is part of the Gauteng Department of Economic Development, said vehicle sales usually anticipate GDP developments, and with the South African economy forecast to decline by an estimated 6.1% this year, this will likely result in at least a 20-30% decline in vehicle sales.

In a report titled ‘Navigating the Business Impact of Covid-19: Re-gearing the Gauteng Automotive Sector, Navigating the Business Impact of Covid-19’, AIDC CEO Lance Schultz said that while the automotive sector has typically proven itself to be very resilient, the AIDC anticipates it will take between two and five years for the industry to return to normal.

The report said the expansion of South Africa’s automotive industry is central to the government’s economic development strategy but the Covid-19 crisis has forced car makers into survival mode and “could push ambitious growth plans out of reach”.

“The local production target for 2020 was originally more than 650 000 vehicles but currently there is no way in which this target will be achieved,” it said.

“In all likelihood, in line with the anticipated slump in demand, production volumes will also decrease by up to 30% for the year.”

They are on their bicycle – ”Out of Africa”. mate!

Nissan make good cars. I like Nissan very much. I hope they recover fully.

Unfortunately, that was NOT my experience.

Brazen, rip-off prices on spare parts (simple o-ring on a metal washer that could not have cost them more than a Rand, was charged at R105 ea – and you needed two! I did the job with two o-rings superglued in place – cost R1.

I’m not impressed with the quality and thoroughness of Nissan engineering. It’s run by the marketing department – where sales-bling is more important than solid engineering under the skin.

You see this directly in the appalling safety crash-test results for Nissan vehicles – especially their so-called – “strong – body” Navarra vehicles.

There’s a REAL reason why the Toyota Hilux has been in a class of it’s own. For decades.

They are moving their Rosslyn plant to Burkina Fasso.