Significant infighting among Nova directors even led to an unsuccessful attempt to remove chairman and fire CEO.
By Ryk van Niekerk 11 Nov 2017  14:06 The current proposal to list the Nova Property Group on the JSE is not fair to the 20 000 former Sharemax investors, as the 43% equity stake the seven founding shareholders will receive is excessive and will unduly dilute the investments of debenture holders.

Rudi Badenhorst, Nova’s financial director, dropped this bombshell from the stage at Friday’s debenture holders’ meeting in Pretoria where these former Sharemax investors had to vote on whether to proceed with the proposed listing or not.

After the meeting, Badenhorst said: “I sat next to Dominique [Haese, Nova CEO] on the stage and it must have looked as if I endorsed the proposal. I do not and I could not sit there and defend it… Dirk [Koekmoer, operations director] and I tried to convince the board that the 43% was not fair to debenture holders. We wanted it reduced to around 10% to 15%… 43% is pure daylight robbery.” 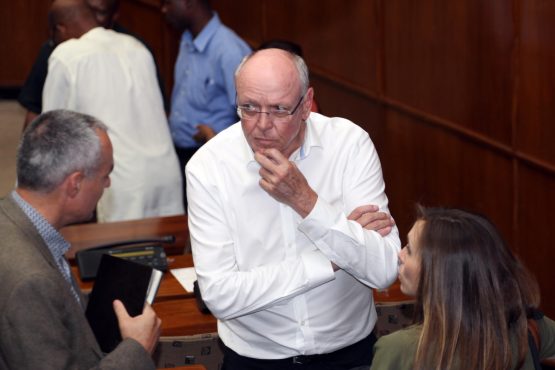 Connie Myburgh in discussion with the author. Picture: Moneyweb

Badenhorst said he raised this issue at several board meetings, including those which were attended by the four newly elected non-executive directors. “Dirk and I were not backed by the non-executives, although two voiced their concerns. I was deeply disappointed.”

Also read: Proposed Nova listing not in the interest of debenture holders

Moneyweb sent several questions to Connie Myburgh, Nova chairman, Haese and several non-executive directors in relation to Badenhorst’s comments. The board did not respond to the individual questions, but issued the following holding statement:

“[The] board has called an urgent board meeting for Wednesday 15 November 2017. The matters raised in your email of 10 November 2017 addressed to Connie and myself will inter alia be discussed at such board meeting, whereafter a response will be provided.”

Badenhorst also lifted the veil on the significant infighting among the Nova executive and other founding shareholders. Badenhorst was recently asked to resign, while Koekemoer was suspended.

This followed an attempt by Koekemoer and Badenhorst, as well as the three minority shareholders, to remove Nova chairman Connie Myburgh and Haese from the board.

Moneyweb has seen a resolution with the signatures of these five shareholders, but the shareholder meeting where it was to be affected, never took place.

These developments occurred ahead of Friday’s debenture holders’ meeting in Pretoria where they had to vote whether to approve or reject the listing proposal. More than 500 elderly former Sharemax investors attended the marathon three-hour meeting which often grew heated. Debenture holders queuing outside the CSIR Conference Centre in Pretoria to register. The meeting started nearly an hour late due to the turnout. Picture: Moneyweb

Several lawyers in the audience strongly questioned the validity of the listing proposal, which Myburgh authored.

The meeting resulted in a formal undertaking by Connie Myburgh, on behalf of the board, to amend the proposed scheme of arrangement to make the actual listing of the company a condition for implementation of the scheme. In other words, unless and until the listing is approved by the JSE, the scheme cannot take place. This undertaking provides the debenture holders with the comfort that if they do ultimately approve the scheme, they will not be trapped in an unlisted company, with only the hope of a future listing.

Myburgh also undertook to provide more detail about the scheme, while a new debenture holders’ meeting is scheduled to be held on 24 November. Myburgh also repeated the assurance that the founding shareholders had entered into an agreement to swap their shares in Nova for shares in Listco.

‘The scheme is not fair’

But with Badenhorst’s assertion that the scheme is unfair to debenture holders, it may face more aggressive criticism than what was seen at Friday’s meeting.

It is important to note that the proposed 43% equity interest in the listed entity stems from the 96% stake the founding shareholders received for free in Nova in 2012.

The four board members were the main beneficiaries and received around 22% each, while three others received 3% each. The remaining 4% stake in Nova went to around 2 000 former Sharemax investors who exchanged their debentures for Nova shares. They effectively paid R94 million for this 4%.

Myburgh was the architect and author of this scheme

It is this 96% shareholding of the founding shareholders that is set to be converted to a holding 43% in the new entity. Upon listing, this stake would represent around R950 million of the estimated net asset value of R2.2 million.

This is significantly more than the R750 million the 19 700 debenture holders, who invested R4.4 billion in Sharemax, are set to receive relative to the net asset value. 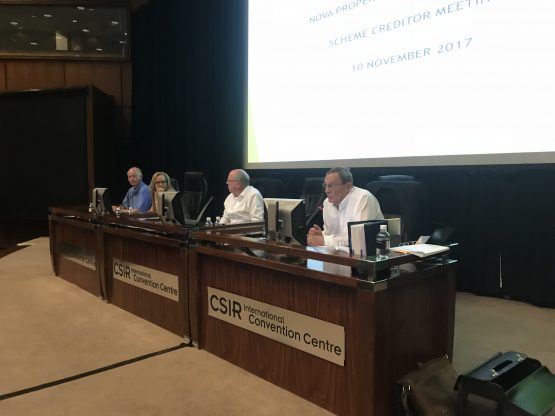 Koekemoer confirmed his suspension to Moneyweb, but did not want to elaborate on the reasons. He said he has responded to the charges, but that they were “bizarre”.

Badenhorst believes Koekemoer’s suspension followed his questioning of the directors’ shareholding, as well as the conflict of interest of the various roles Myburgh fulfilled.

“He is the chairman of the company. He is a major shareholder. He is also the receiver of the Nova Debenture Trust.”

Retainer or fees for legal services?

Several attendees of the debenture holders meeting also voiced their concern about Mybugh’s law firm being a trade creditor of Nova to the tune of R9.5 million.

During the meeting, Myburgh explained that this amount was due to historic legal fees due to him dating back as far back as 2012.

However, Badenhorst said this amount was actually a retainer related to the closure of Myburgh’s firm when he became the chairman and employee of the group.

Moneyweb has also seen a document that in addition to this R9.5 million due to Myburgh, he has also been paid more than R9 million since 2012 for this retainer.

Badenhorst said he protested against these payments and the retainer because it is in addition to Myburgh’s current annual salary of more than R4 million. “We have been fighting for years over this retainer. I even sent an email to the board stating: ‘You are looting the company’.”

Moneyweb has seen a copy of this email.

The amount was written off in the previous financial year, but reappeared and was approved when the new board convened, Badenhorst said.

So Badenhorst and Koekemoer think it’s OK to pocket “around 10-15%”. Just not 43% of the entire company. But then I suppose seven years directing alongside like Myburgh and Haese can really distort your sense of right and wrong.

If not for Ryk and his team, this corporate theft would have been completed by now

My burgh and his friends should pay back salaries, give up all rights to shares and get lost.