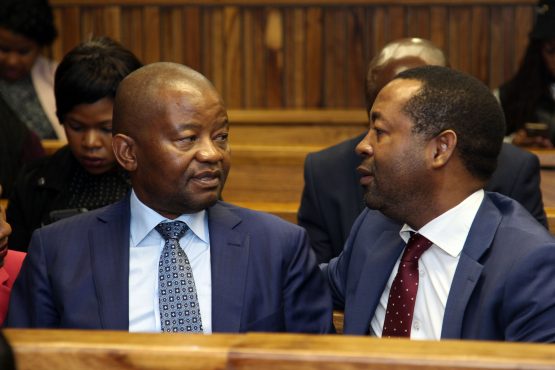 In a bid to calm shareholder jitters about the protracted punch-up between Old Mutual and its axed CEO, the insurer has fired Peter Moyo for the second time.

Old Mutual issued an open letter to shareholders on Thursday, saying that it has given Moyo a further notice terminating his employment contract with SA’s second-largest insurer – effectively firing him again.

The insurer’s letter comes at a time when the Johannesburg high court is expected to make a ruling next week on whether Moyo can get his job back because Old Mutual is appealing a recent judgment by the same court that paved the way for him to be reinstated as CEO.

“It is clearly in the best interests of the company and its stakeholders that the employment relationship with Moyo should come to an end,” Old Mutual said in its letter to shareholders.

Since Moyo was suspended on May 23, hours before the Old Mutual annual general meeting, due to “a material breakdown in the relationship of trust and confidence”, shareholder value has been eroded. Old Mutual’s share price has fallen by 15% to R18.31 a share (close on August 21) since Moyo was suspended on 23 May – wiping off more than R17 billion on its market capitalisation.

Old Mutual subsequently fired Moyo on June 18, accusing him of wrongfully pocketing dividends worth R30 million linked to NMT Capital, an investment holding company co-founded by Moyo, and in which Old Mutual holds a 20% stake.

Old Mutual’s largest institutional shareholders including Allan Gray, Stanlib and Prudential Investment Managers have engaged with the insurer’s board, led by chairman Trevor Manuel, to find a resolution to the impasse involving Moyo.

Allan Gray, Old Mutual second-largest shareholder after the Public Investment Corporation, said it doesn’t believe the insurer’s relationship with Moyo is workable due to the “severe breakdown in their relationship”. The Cape-Town based asset manager, which has a 10% shareholding in Old Mutual, wants Moyo to walk away from the insurer without a financial settlement.

Moyo’s lawyer Eric Mabuza said the former CEO was issued with a letter from Old Mutual on Wednesday evening that terminated his employment contract with the insurer. Mabuza has described Old Mutual’s move as “corporate madness” and “goes beyond anything we have seen in our lives”.

“How can you fire a CEO twice? What employment contract are they terminating again? They have already issued Peter with a termination letter in June. Someone has to intervene to save Old Mutual from itself. The company is self-destructing,” he told Moneyweb.

Mabuza added that the move by Old Mutual is a “circus” because the insurer did not wait for the outcome of ongoing court proceedings before it issued Moyo with a termination letter.

On July 30, the high court ruled that Moyo should be temporarily reinstated as CEO and blocked Old Mutual from appointing his successor. The insurer is appealing against the ruling.

Old Mutual believes that it doesn’t have to comply with the ruling to reinstate Moyo as CEO because it is in the throes of appealing the ruling. It has asked the high court for a declaratory order to affirm its belief.

However, Moyo launched a counter application, asking the high court for an order to declare the conduct of Old Mutual’s 14-member board to be in contempt of court for “failing” to comply with a ruling that reinstated him as CEO. The court is expected to make a ruling on all the order applications next week.

If Moyo has MNT to run and go to, why does he try cling onto being CEO at Old Mutual?

Some men aren’t pushovers. Learn a thing or two.

On one hand, I think this Moyo’s lawyer is a nutter. I also think Moyo is holding on for dear life when clearly he is not wanted.

On the other hand, what the heck are the OM board doing? They clearly haven’t followed the correct process and caused a 15% reduction in share price.

If I was a major shareholder, I would be looking to clear out the lot of them. CEO and board.

So all the asset managers are sitting watching our money lose value because Peter and OM don’t get along.

Then again they did the same with Steinhoff.

Mr Eric Mabuza, shall we explain the strategy? The first termination letter has been challenged and if the challenge succeeds, the second termination letter then comes into play and will have to be challenged separately. Maybe Mr Moyo needs a sharper lawyer. Unless the lawyer is just playing to the crowd. Of course he is. lol

First: it’s not a strategy, it’s a tactic. Rather poor one at that. The OM board is showing rather poorly here in a case they handled badly right from the start. If his allegations about the Chairman having OM pay his personal legal expenses plus some meddling we can also discuss another time, how some board members especially chairmen in Corporate SA are really more interested in running these companies than providing strategic leadership.

If most of the comments here are anything to go by, then the individual must be very afraid of how more powerful individuals can use corporates to fight their political battles. If I can take liberties here and assume that the choice of lawyer and advocates who themselves are very political animals, it’s an extension of ANC battles spilling over into the private sector. Peter Moyo like Phakamani Hadebe look like they were on the wrong side of the victorious faction. I don’t think it’s a coincidence that Hadebe suddenly took ill when Maria Ramos was given (fact needs checking) the job to break up Eskom. He had after all left Absa in a huff a few years ago because he wasn’t considered good enough to head one of their units. And of course Ramos is married to Manuel. Just this time the clean up team is against Moyo who is clearly no pushover.

So when can we expect for Mr Moyo to be reinstated, again? 😉

Is it the right time to buy or need to wait a little more. Cause I have no doubt that the share price will appreciate

“……someone must save Old Mutual from itself”. What a self-righteous statement by a defender of State Capture….

Moyo has apparently not learned the consequences of “beware of lawyers that tell you that they are going to smash the opposition”.

i think they need to get judge judy!

What seems obvious to me is that this is all about red herrings – these folk (both sides) are hiding something and obfuscating and distracting like mad. The issue is now about form and process while the substance remains hidden. Easy to do by making the argument about ‘a breakdown of the relationship’, etc. And, meanwhile the lawyers get rich and the wool gets pulled over the eyes of all stakeholders. Let’s see what eventually comes out of the woodwork…

Maybe this is a case of …third time and your’e OUT.

After round one of the battle of the skebengas I would call it a draw. Trevor gets his private legal bills paid for tax free by the company. Peter gets away with not paying the R30 mil dividend. Seconds out, pass the popcorn