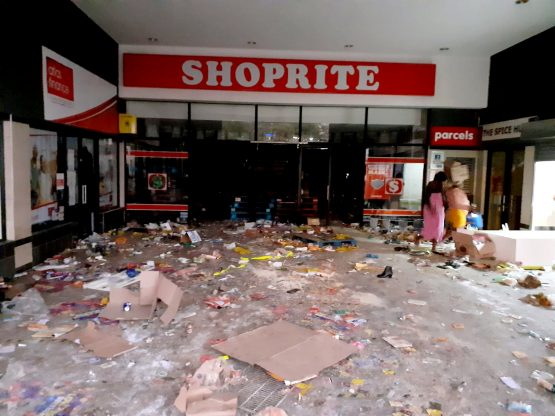 A Shoprite in the KwaZulu-Natal small town of Melmoth was one of the affected stores. Image: Supplied/Melmoth Community Forum

Shoprite Holdings – Africa’s largest food retailer – revealed in a Sens statement on Tuesday that just over 200 of the group’s stores in KwaZulu-Natal (KZN) and Gauteng were affected by the looting and vandalism in the two provinces last week.

Most of the stores affected were within its SA supermarkets division, but its liquor, furniture and distribution centres were also impacted, largely in KZN which saw the brunt of the unrest and incidents of arson.

Of the  group’s 1 189 supermarkets trading under the Shoprite, Usave, Checkers and Checkers Hyper banners in SA, Shoprite said 119 stores (69 Shoprite, 44 Usave and six Checkers, including one Checkers Hyper) have been severely impacted as a result of looting and/or fire damage.

However, it pointed out that operational capacity has been fully restored at the DC since Sunday, July 18.

With regards to the group’s 340-store furniture division (including OK Furniture and House & Home) in SA, it said 35 stores “experienced severe damage either from vandalism, looting and/or fire”.

The group noted that most of its stores (in KZN and Gauteng) that closed on a precautionary basis last week have since been reopened.

“Despite constraints in certain instances from store closures due to landlords keeping centres closed, the group is committed to rebuilding and restoring operations as quickly as possible and with each passing day we add to our count of stores re-opening for business,” said Shoprite.

The group pointed out that despite the week of political and social unrest in South Africa impacting its operations in KwaZulu-Natal and Gauteng provinces, it is “noteworthy that, as a result of exceptionally strong turnover in the remainder of the group’s nation-wide operations, the group’s Supermarkets RSA segment achieved positive sales growth last week.”

Meanwhile, Shoprite said that it is adequately insured for material damage to assets, stock and business interruption.

“Whilst some necessary irrecoverable one-off costs have been incurred in relation to protecting our operations, they are not expected to be material at a group level and will be highlighted as part of our routine reporting,” it added.

Commenting following the looting and damage, Shoprite Group CEO Pieter Engelbrecht said: “Our sincere thanks go out to our colleagues in particular to our regional teams in the affected areas. Their efforts, together with world class execution by our loss prevention, supply chain and fleet management teams were unsurpassed.”

“To our loyal Usave, Shoprite and Checkers customers your resounding show of support collectively contributed to our ability to re-open and rebuild our business and serve our communities in KwaZulu-Natal and Gauteng last week. We cannot thank you enough.”

The big corporates will recover. They will recoup the investments lost in the riots by increasing their profits by 1% point across the board. Small enough not to be noticed by shoppers, yet generating enough profit to recover their losses. Once again the man on the street pays .

I hope big business doesn’t fall for the “12 instigators” horse and pony show. The ANC needs to be solely to blame for this disaster and the only thing that may bring about any hope of effective change – is that big business refuses to fund the ANC as they have been doing, and demand tangible change.

Yip The Dirty Dozen spin will be played out till a fall guy is found. Some one who will go to jail for a few months, be well compensated and appear on a golf course some where.

Agree,watch it will turn out to be ‘rouge elements’ and found to have “no link to the ANC”. Imagine the spin if Bell Pottingers bunch were around.

“The corporates will recover”

My recommendation to the corporates is, raise the prices and don’t take the slack. Enough is enough.

Either hard working people that work 12 hours a day, weekends and risk their resources get compensated or give it up, let the looters walk to Zimbabwe or Mozambique and buy their groceries there.

These numbers are huge, remember that each store is massive and now multiply it by 150.

The lady who works at the till knows all the clients who came for the ANC specials. People from the community plunder people from the community. This is the real meaning of ubuntu for you. A public display of the heart and soul of ubuntu. These are not small, isolated acts of plunder. This is an entire society acting as one. This is a logical manifestation of the communalist mindset. This mindset also determines their voting patterns. That is why they support the ANC.

What they have done to Shoprite now, they will do to the banking system through the ballot.

Just imagine the number of staff that won’t get paid in the foreseeable future due to their services not being required. And all the rental agreements that won’t be paid due to the shopping centres being damaged.

This was the worst act of terrorism SA suffered in recent history.

And then a minister (forgot her name) said that the “right to life” weighs heavier than the “right to protect property”. That while the property destroyed was actually the means to make a living for so many.

No doubt ANC support will go up the next election, they gave the community what it wanted – the destruction of the hated post-colonials and their wealth

Dont reopen the Stores in the Affected Areas : If the community wishes to burn them then let them Starve after the event : Protect your neighbourhood or pay the consequences :

Basically, the principle of “Ubuntu” has failed.

Enjoy the flat screen your children and grandchildren will pay for, for the rest of their lives.

I am sure there is a kink in the DNA here.

If I recall Sensei and pwgg are farmers? Wonder if he or any other farmer would be so kind as to tell us a bit more about sheep behavior?? Don’t they follow each other to slaughter etc.???

@Mmmm, Some sheep outside Beaufort West recently told me they follow an elderly sheep called Jacob, a member of a larger group called Politicians, mostly of the Populist breed and generally the runts or ones with the least value in the herd. But knowing sheep, they might be wrong. Hope that answers your question.

and please don’t even try to convince me that the looting of the liquor stores was due to hunger, let alone the fact that liquor itself has no nutritional value

Well the looters would know their way around those stores.

That is after all where they usually shop, no?

One of the local politicians distributed a circular requesting South Africans to join him in a Class Action suit against the government. Its tempting but if it succeeds, the taxpayer will probably foot the bill. Against the ANC members personally (including the certain wealthy, privileged and elite children), the NEC, all ANC parliamentarians and all the senior cadre deployed bureaucrats, is even more tempting – but they are all bankrupt – of ideas mostly and probably living way beyond their means owing the banks billions. But its an idea that might have value – especially if the big corporates provide the legal fee funding. Hopefully it will teach future politicians not to mess around for 25 years for the country to implode.