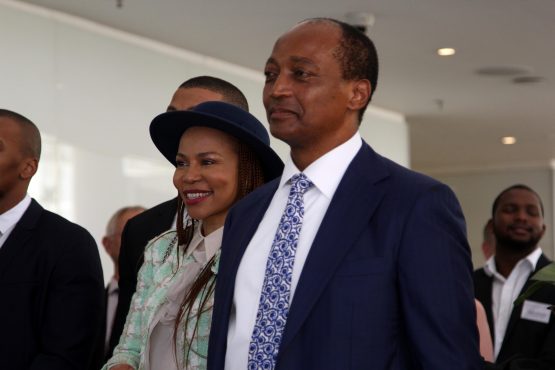 Patrice Motsepe's (pictured) vision comes to life with the listing of ARC Investments on the JSE yesterday. Picture: Moneyweb

Patrice Motsepe blew the kudu horn with vigour at the listing of ARC Investments at the JSE yesterday, in the process giving the public the ability to participate in the same businesses the billionaire has invested in outside of African Rainbow Minerals.

So, the question becomes, what’s in it for investors?

The structure and operation of the investment holding company that joined the speciality finance sector of the JSE can best be described as a private equity fund wrapped in the shell of a public company, a little different from his mentor’s Berkshire Hathaway.

Motsepe referenced Buffett in his opening speech: “We always learn when we meet [with him] in Omaha or other parts of America. And what we learn always is, Warren invests in the confidence he has in management, world class management, [global] competitiveness, and all of the companies that we have invested in reflects the deep belief and faith we have in them, and also the recognition that they are world class… I think we are going to do very well.”

Like the majority of Berkshire’s public company investments, ARC Investments prefers to take a sizable minority stake in investee companies, with the exception of its ownership in Indwe and Constellation Capital. “It needs to be big enough for us to have a say in the direction of the company, and big enough for our BEE credentials to count. And we want to know how they will become more competitive with us as a shareholder,” says co-CEO Johan van der Merwe. The value of the investments transferred by ARC to ARC Investments is valued at R4.47 billion. The company raised R4.3 billion at listing, and has made commitments amounting to another R2 billion, leaving it with a war chest of approximately R2.2 billion. There have been no shortage of opportunities. “But we’ll probably return to the market regularly,” says co-CEO, Johan van Zyl. This is because there is no shortage of entrepreneurs looking for a BEE partner with virtually limitless resources at its disposal. The company is more than capable of writing a single cheque for as much as R2 billion.

Van Zyl said they looked at 400 propositions to get to the forty investments currently in the portfolio. “Two hundred fell by the wayside after the initial appraisal, and about 20% (80 companies) we looked at in-depth internally before we presented to our investment committee that is chaired by Tom Boardman and on which Patrice sits.”

The philosophy of partnering with the best entrepreneurs in each industry has seen the company participate in property deals with the likes of Jonathan Beare, and in information technology and telecoms with the likes of Michael Jordaan and the founders of RMB in Multisource Telecoms Proprietary Limited, trading as ‘Rain’. The 20% stake in Rain is the company’s single largest investment to date.

Similar deals are on the way, say the CEOs. Expect a deal in the mining space involving Sipho Nkosi (ex-Exxaro CEO) and Bernard Swanepoel (ex-Harmony CEO), and something in the tertiary education space which the company sees as a strategic “building block”.

The value proposition for investee companies is powerful. In ARC Investments, they get access to a majority black-controlled investor in perpetuity, and one that can sign virtually any sized cheque. ARC Investments has been set up to stay invested in companies for the long term. The entrepreneurs also get access to people that have a long and proud track record of building a range of businesses.

The combination of a BEE partner with firepower, expertise, and most importantly, the inclination to stay invested in companies and provide the BEE credentials for the long term (thereby giving up the opportunity to realise gains and sell out) provides the ammunition for ARC Investments to extract sizable discounts on the prices of companies they buy into. “When we get to the stage where we are interested in investing, we tell them what price we are prepared to pay and they must go home and think about it,” says Van Zyl, who indicates that the discount they extract can be as much as 15% to 20%.

But for the pleasure of having access to the pipeline of deals people like Patrice Motsepe and the two CEOs have, ARC Investments is charged a fee by the general partner based on the value of the company. This starts at 1.75% per annum, and gradually declines the bigger the value of the company gets. With ARC Investments targeting growth in its net asset value of 16% per annum before fees, investors should be more than compensated for this cost.

When will the BEE companies take majority responsibility for their own wealth creation?

The day WMC is no more…

Is that Western Motsepe Capital?

if this is accessible to the general public, what platforms have been created for the general public to have easy access to the purchasing of these shares, or is the only route that of working through a broker, which is then expensive and would exclude the man on the street in accessing the shares, please advice

You can buy ARC right now at a low cost and with a small investment amount on the platform EasyEquities.co.za

Go to easyequities.com and its quite easy to buy some stock.I think this one be an interesting listing which may have some energy in the years to come

I don’t think this will be a good investment. They overpaid for the Rain assets (Rain is valued higher than Neotel). The extra layer of fees will just mean more money will flow to Patrice at the expense of shareholders

Reference to Rupert and the current BEE angle opens up the niggly thoughts of whether there is anything in the accussations sometimes heard about Rupert (being an Afrikaans family) having made their fortune with opportunities from the so-called “apartheid” situation – and now we read how BEE attractiveness of ARC being a somewhat more real BEE partner than often is the case, they could be offered cheaper deals to buy into good business than what a real free-market without political opportunity creation would have allowed.

It is a pity that a businessman like Patrice Motsepe cannot be clearly judged for his business skills in its own right, due to the cloud of BEE and how politics and black empowerment benefits his position. Will the Motsepe group keep on growing into a next generation sustained empire should political advantage points disappear?

Yet, he is doing the right things – mostly – to improve lives of SA’ns for which I respect him and took up some shares.

However, the pre-listing “Exclusive Private Placement” @850c was nothing special – closing price down 5c Friday

All this tells me – as non-expert – even if shares are oversubscribed many times (if true), the economy is still very bad and sentiment in SA is running on low/near empty.

But the clever and brave investors will make good money.