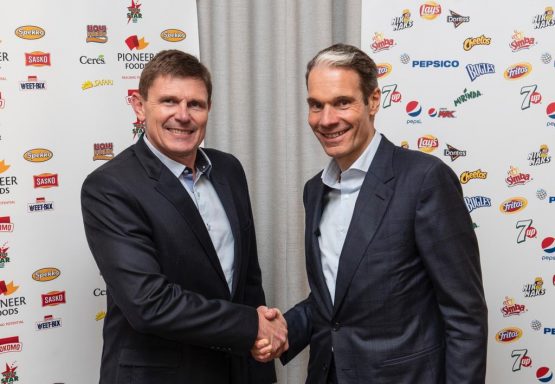 PepsiCo, which is listed on the Nasdaq in the US, has announced on Friday that it has entered into an agreement to acquire all outstanding shares of Pioneer Food Group for R110 per share, a 56.5% premium as of July 12.

Pioneer Foods, which is listed locally on the Johannesburg Stock Exchange, noted the “firm intention” to purchase by PepsiCo in a Sens statement and that the transaction is one of PepsiCo’s largest outside of the US.

Food producers have struggled amid a slump in retail sales as consumers cut back and dry weather hit maize and other produce. Pioneer, which uses maize in many of its products, reported a decline in half-year earnings in May, weighed down by shortages in the staple food.

The local group says in its Sens that this is a demonstration of PepsiCo’s belief in “South Africa’s potential and its long-term commitment to the country”. It adds that the transaction will contribute meaningfully to the growth of the SA economy.

“It could also attract further foreign direct investment and reinforces the case that South Africa is an attractive destination for multinationals,” Pioneer’s statement reads.

Pioneer, whose brands include Weet-Bix cereal, Liqui Fruit juice and Sasko bread, is the latest consumer goods firm to be the target of a buyout after South Africa’s Clover Industries, which processes products including yoghurt, beverages, and olive oil, began takeover talks with a consortium of companies called Milco SA last year.

The US drinks and snack group said on Friday that Pioneer’s product portfolio was complementary to its own and would help PepsiCo to expand in sub-Saharan Africa by adding manufacturing and distribution capabilities.

It added that the acquisition, valued at approximately US $1.7 billion, will be funded through a combination of debt and cash, and “has been unanimously approved by the boards of directors of both companies”.

The transaction is, however, subject to relevant regulatory approvals and a Pioneer Foods shareholder vote. Pioneer says in its Sens that the independent board, which was established in relation to the offer, has unanimously recommended the offer to its shareholders.

According to the local group, ordinary shareholders who collectively hold 52.85% of the aggregate of the issued ordinary and Class A shares, “have furnished irrevocable undertakings to vote in favour of or accept the PepsiCo Offer”.

PepsiCo said that the transaction forms part of its goal to become “faster and more locally focused”, and will create a new operating sector for sub-Saharan Africa, led by Eugene Willemsen. “Willemsen, who has been with PepsiCo for nearly 25 years, has extensive experience in growth markets, having previously led our businesses in Turkey and South East Europe,” the company said.

Shares in agribusiness investment company Zeder Investments, which holds Pioneer as part of its portfolio, also rose more than 22%.

Bit Pricey, but appears to be a good deal.

It’s convenient that the piece only shows today’s trading, but when you extend the graph to include several days prior you will notice a nice uptick in the price. This is suspicious cause the year to date is down and besides today’s news there is no reason for the increase prior to the announcement. Some insider information perhaps?

the share was 200 a few years ago I think, so one could say half price figuring in cost of capital 😉

somebody should take a look at the run-up in the share price from sustained below 70’s since a month ago. Small volume though

Side bar: this is very little to do about growth in SA (there is none) but about growth in Africa, which now ironically is enormous as trade liberalisation is taking place. The ironies are so multi-levelled here!

No growth in SA? I don’t know. Retailers seem to be doing better and better. These guys supply retailers and so I fail to see the logic in that negativity. Then there is the story of South African infrastructure, stability and POTENTIAL if all the reforms work out. That means something. They could have chosen to go to Kenya, or Nigeria if this was a purely African mission. I think this comment and similar attitudes show how some spend their days lamenting the deplorable in SA while others spot the opportunity and buy.

People fail to see that BEE/AA only affects companies that have government dealing.

Absolutely not true. Our small business supplies a major private co in SA whose overall BEE score is weak, because of ownership. As a result they are under massive pressure to improve their score and are now pressuring the little guys. We are busting our gut to now give away 51% of our little business – where we earn one ok salary a month, as profit! Taking the food out of our mouths! Plus our ‘partner’ wants to target the public sector which we have no interest in servicing or financing!!!! Total joke!

This BEE thing has SA on its knees already. These plonkers are just to thick to see it.

Don’t think we are the next Dubai are we. In old Cyril’s dreams maybe. Hahahaaa. Smart city I ask you.

Give me the percentage I am a perfect candidate

So much negativity they could have chosen anywhere in Africa, but they chose SA.

SA has its strength and it is also better to use SA as springboard into Africa than say Nigeria… Infrastructure, skills and Capital.

SA is selling out at the bottom of the cycle and profits and dividends are leaving the country.

Why is management promoting the deal?

I thought Zeder/PSG used to be clever investors.