A view of the old pavilion building at Arlington Racecourse. Image: Supplied

Embattled Phumelela Gaming and Leisure’s defunct Arlington Racecourse in the Eastern Cape’s Nelson Mandela Bay, has been put on the auction block, opening the way for the 62-hectare site to be redeveloped into a residential estate or industrial park.

Read: Horse-racing collapse takes Phumelela to the brink (May 2020)

The largely vacant but prime property is one of the largest land parcels within the Port Elizabeth city area to come to market, according to Broll Auctions Group, which is handling the sale.

“It has come to market as part of Phumelela’s business rescue process. We have been appointed by the business rescue practitioners to auction the property, which has not operated as a racecourse since 2013,” Ish Hendricks, group auctioneer at Broll Auctions tells Moneyweb.

“The auction of the property is getting strong interest from both private businesses in the Eastern Cape as well as large national JSE-listed property companies,” he adds.

“It is a developer’s dream, as it is pretty much a greenfields site that can be turned into a residential or industrial estate.”

Hendricks did not want to reveal the reserve price of the property or its municipal valuation, saying the auction is meant to get the best price and gauge market interest by punting it nationally. However, legitimate bidders taking part in the auction on April 23 at the Radisson Hotel in Gqeberha will get access to this information. 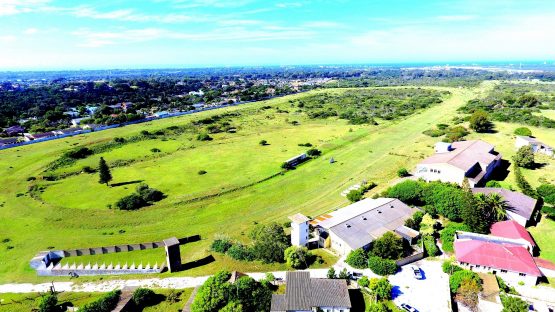 An aerial view of the massive Arlington Racecourse, once the centre for horse racing in the Eastern Cape. Previously known as the St Andrews Racing Club, the track was opened in 1950, but closed in 2013. Image: Supplied.

Hendricks also said he could not reveal interested parties due to the auction process and rules, but is confident the property will be snapped up.

Sale could raise more than R50m

Considering the location of the site, 10 minutes from the airport and within the popular Warmer area, which is a few kilometres from the beach, the property is expected to fetch more than R50 million.

Phumelela Gaming – a JSE-listed group before the Covid-19 economic fallout and the country’s largest horse-racing and tote-betting operator – has been forced to put the property on auction as part of its business rescue process.

Billionaire family and long-time horse racing fanatics the Oppenheimers are also involved in the business rescue process. Several of Phumelela’s assets are being sold in order to pay off creditors.

“The adopted business rescue plan provides for the sale of all the company’s assets and payments of the net proceeds generated to creditors in terms of the provisions of the Companies Act,” Broll notes in a media statement on the racecourse sale.

“Once a centre for horse racing in the Eastern Cape, the Arlington Racecourse … will make history when the 62-hectare property becomes the country’s first horse racing track to go under the auctioneer’s hammer later this month,” it adds.

Arlington, previously St Andrews Racing Club, was opened on 23 December 1950, by the then Mayor of Port Elizabeth, JCK ‘Boet’ Erasmus. The last race was run in 2013.

However, the 77-hectare Clairwood site was sold during the listed property boom at the time and was seen as a strategic site in Durban’s south industrial basin, next to sub-Saharan Africa’s busiest port. Land around the Durban port is in high demand.

Capital Property Fund was later taken over by JSE-listed Fortress Income Fund, which is currently driving the development of the multi-billion-rand Clairwood Logistics Park development on the site.

On the Arlington racecourse auction, Hendricks says while an industrial park can work on the site, the property would need to get rezoning approvals for such a development from the Nelson Mandela Bay Municipality.

“It is more suited to a residential estate development, being located adjacent to the suburb of Walmer Heights.… It is the last large piece of land within the hub of the main city [Gqeberha],” he points out.

“An application has been submitted to rezone [the land] from ‘undetermined’ to special purposes for residential units,” he adds.

“The land, which has structures befitting a race track such as a pavilion and stables, is being sold ‘voetstoots’ – as-is,” says Hendricks.

“Most developers who are considering buying the property are looking at ideas such as student accommodation, micro apartments and retirement villages.

“They are also looking at incorporating the landmark pavilion into their development schemes.”

Seriously, just go there and see immediately why you wouldn’t want this land unless you were going to build a 80 ft wall around it.