The grocery retailer’s turnaround plan, which has been five years in the making, starts to deliver.
By Ray Mahlaka 18 Oct 2017  00:27 Pick n Pay’s CEO Richard Brasher is getting the job done in turning the fortunes of the retail group around. But the recovery has three more years to go. Picture: Supplied

Nearly three years ago, Pick n Pay’s CEO Richard Brasher told shareholders that the retail group had completed its phase of “stabilising the business” that was the first step in its effort to rein in losses and return the retailer to its former glory.

The next phase focused on growth by offering customers lower prices and sprucing up its aging store network.

If its interim results are anything to go by, growth is finally showing signs of promise. Pick n Pay grew its after-tax profit by 15% to R438.8 million for the 26 weeks to August 2017 and diluted headline earnings per share grew by 13% to 90.36 cents.

However the retailer is not out of the woods yet as sales and profitability are still challenged. Trading margins – the key metric to measure profitability in the retail industry – grew to 1.6% from 1.5%. Shoprite, Pick n Pay’s closest competitor, is accustomed to interim trading margins of above 5%.

The group’s overall interim revenue grew by 5.5% to R40 billion and like-for-like sales (excluding new stores opened) grew by 1.8%. Slightly concerning is that if one deducts the turnover gains driven by internal inflation of 3.6%, like-for-like volumes were down 1.8%. However on an annual basis (year to February 2017) like-for-like volumes declined by 2.7%.

“If the market was a bit more buoyant and if consumer confidence levels were higher, it would be quicker to turn the business around,” said Brasher. He added that Pick n Pay has two to three years to go for its recovery plan to yield a trading margin growth of at least 3% – last seen by the retailer in 2010.

Ron Klipin, a portfolio manager of Cratos Wealth, said Pick n Pay’s margins are “not inspiring” as he expected that the retailer’s recovery, which has been five years in the making, would deliver margins of at least 2%. “There’s a lot of hard work still to come. It will take time to grow margins given a tough consumer market,” he said.

Improving margins and profitability hinges on wooing consumers with lower prices, on-going store refurbishments, and cost control to free up cash that will be invested on consumers. To cut costs, Pick n Pay offered its staff a voluntary retrenchment option, an exercise that set it back a cool R200 million. The retrenchment drive – the first since 2013 – will benefit its balance sheet and consumers in the years to come, said Brasher.

Pick n Pay recently committed to investing more than R500 million in slashing prices of over 1 300 key basket items. However, reducing costs when the retailer is not gaining market share is problematic, said Klipin.

It’s pulling out all the stops to retain consumers; offering them a money transfer product in partnership with TymeDigital (a subsidiary of the Commonwealth Bank of Australia) and a store account to its over seven million active members of the Smart Shopper loyalty programme.

On the latter, Pick n Pay has come under fire for offering already indebted consumers credit that can be used to purchase food and other general goods.

Brasher has defended the credit offering saying Pick n Pay has no intention of giving consumers credit that they cannot afford. “Probably 50% of consumers’ goods are already purchased by some form of credit – whether it’s informal or formal credit. We are providing a credit service that probably targets people who spend R800 to R1 000 groceries and already use some other form of credit.”

Pick n Pay’s recovery plan has included pumping R7.6 billion of capital into new stores and distribution warehouses since 2013. During the period under review, Pick n Pay opened 63 new stores and has undertaken 34 refurbishments. It has been rolling out convenient and “next generation” Pick n Pay and Boxer stores that have faster checkout points and better product choices.

Anthony Rocchi, a portfolio manager at Rexsolom Invest, said that although Pick n Pay’s margins are under pressure its turnaround strategy (launched in 2013) is delivering – judging from its return on assets (profitability relative to assets).  See growth in red below. 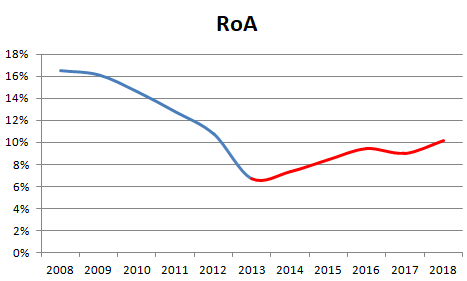 However, Pick n Pay faces another problem that might hurt growth.

High-flying Shoprite is fine-tuning its strategy to attract upper-market consumers through its Checkers brand, with the launch of a slew of convenience food products – a market traditionally dominated by Woolworths.

Brasher is unfazed. “Convenience food is a worldwide trend. We will play in it. We do play in it and we will compete in it. The market will grow and everyone will grow with it.”