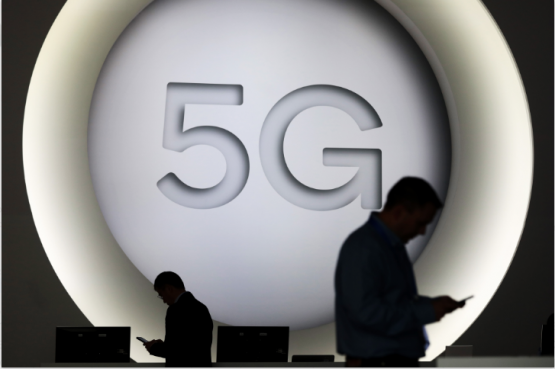 The new broadband spectrum will better cater for new generation 4G and 5G technologies and is also likely to see the price of data falling. Image: Bloomberg

The Independent Communications Authority of South Africa (Icasa) hailed the auction a success, as it raked in more than R14.4 billion for the fiscus through the process.

Read:
Telkom and Rain win first round of spectrum auction
Why Cyril is going after Telkom
Telkom ‘hellbent’ on stalling licensing of high-demand spectrum – Icasa

Economists, business leaders and organisations such as the International Monetary Fund (IMF), have lamented the lack of “high-demand spectrum” in the country as one of the major bottlenecks to SA achieving higher GDP growth.

The last time SA auctioned spectrum on a permanent basis was around 2005. Over the past decade, there have been several delays in Icasa rolling out new broadband spectrum, which better caters for new generation 4G and 5G technologies.

“It always seems impossible until it is done” Icasa says in its statement on the spectrum auction, quoting SA’s late former President, Nelson Mandela.

Icasa chairperson Dr Keabetswe Modimoeng described the process as “complex” and expressed his gratitude to all bidders for their cooperation and participation in the auction.

“This was our inaugural radio frequency spectrum auction, and we are really grateful to have reached this stage without any hassles and challenges from the first day of the actual auction to date.”

“This shows South Africa’s capability as an investment-friendly destination,” he said.

“We look forward to all South Africans benefitting from the dividends of these regulatory interventions, and to seeing the proceeds of the auction being put to good use for the benefit of all South Africans,” said Modimoeng.

“This auction was indeed in the best interest of all South Africans, as will be the subsequent licensing interventions post government’s revision of the Wireless Open Access Network [WOAN] Policy,” he added.

As expected, the country’s two largest mobile operators and data providers, Vodacom and MTN, have secured the lion’s share of new spectrum, after spending more than R5 billion each at the auction.

“The revenue collected from this auction totals more than R14.4 billion, which will go to the national fiscus. This is the total amount generated from the Opt-In phase auction, which took place on 8 March 2022, and the main auction stage, which commenced on 10 March 2022 and concluded [on] 17 March 2022,” Icasa said.

“The main auction stage comprised 58 rounds of bidding between the six bidders,” it added. 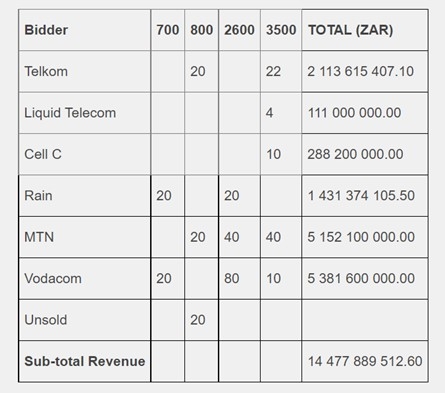 In a JSE Sens statement, MTN SA hailed the spectrum auction as “historic”, noting that the group “has secured high-demand spectrum to support its 4G and 5G expansion drive”.

“This compares favourably with global benchmark averages of approximately $0.083/MHz-POP – according to Coleago Consulting – for spectrum in similar auctions.”

“This is the first time in approximately 17 years that spectrum has been released on a permanent basis in South Africa and increases MTN SA’s total permanent spectrum holdings from 76MHz to 176MHz,” the group noted.

“The spectrum has been allotted for a 20-year period and on a technology-neutral basis,” MTN added.

“The release of high-demand spectrum is a significant step forward for South Africa in the implementation of the key structural reforms needed to drive economic growth,” said MTN Group CEO Ralph Mupita.

“We commend Icasa and the government of South Africa for the bold and transformational decision to proceed with this auction.”

“Securing this high-demand spectrum is critical in positioning MTN SA, the second largest operation in the MTN Group, for sustained and profitable growth into the future. We have secured an optimal mix of low-band and mid-band frequencies for MTN SA that will support the data traffic we will carry for 4G and 5G services,” he added.

In a Sens statement on Friday morning, Vodacom highlighted that it has acquired 110 MHz of high demand spectrum as part of the Icasa auction and assignment process.

“Vodacom’s contribution to the auction proceeds will significantly assist government in achieving their objectives to unlock the digital economy, with widespread benefits across our society,” the techco giant says.

“[We] would like to offer our sincere congratulations to Icasa, the Minister of Communications, the Presidency and all industry stakeholders who have co-operated in bringing this process to fruition in the best interests of all South Africans.”

“Although the spectrum auction pricing was high, Vodacom is pleased with the outcome of the auction, which is a win for all of our customers who can in the coming years benefit from even wider coverage, faster speeds and enhanced network quality,” adds Joosub.

“Once the auction process is fully concluded, Vodacom’s immediate focus will be on the deployment of valuable spectrum to extend both 4G and 5G network coverage to more parts of the country and improve quality of service while we continue to address the cost to communicate.”

Why did it take 10 years to get to this point? The political infighting between connected cadres and BEE wannabees held the entire economy at ransom. Connected ANC elites, jostling for privileged positions of favoritism, impede the development of renewable energy, mineral exploration, infrastructure projects, and service delivery.

The ANC is to South Africa what Putin is to Ukraine.

Well-timed and purposeful actions are crucial in any business. The difference between a successful farmer and a bankrupt farmer is 10 days. They do the same things, and spend the same money, just at different times. The same is valid for a government.

How solid is that correlation between spectrum and GDP growth?

Sure, probably more revenue for the telecomms firms and more tax revenue, but how much is used for real productive activity?