‘We are desperate for some real action on Eskom’ – Sibanye Gold CEO Neal Froneman.
By Amogelang Mbatha and Mike Cohen, Bloomberg 27 Oct 2019  08:56 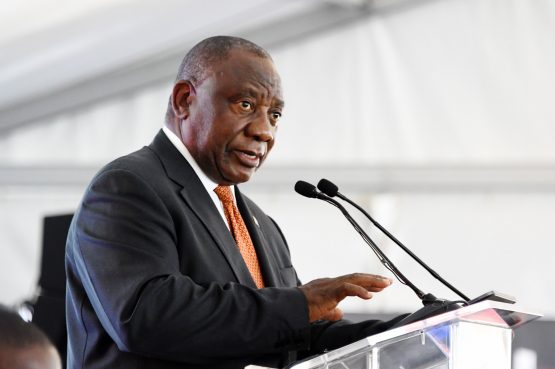 There have been no shortages of policy papers, conferences and speeches outlining how to unlock economic growth, but the deeply divided ruling ANC and its labour union and communist allies have struggled to agree on a way forward. Bailouts for power utility Eskom are draining the state’s coffers and plans announced months ago to split it into three operating units and reorganise its $30 billion mountain of debt remain a work in progress.

“We are desperate for some real action on Eskom,” Neal Froneman, the CEO of Sibanye Gold, the country’s biggest private employer, said in an October 25 interview at Bloomberg’s Johannesburg office. “You have to make some tough decisions. It just blows my mind that we don’t just get on and do it.”

The disenchantment is evident in the financial markets, with the rand down 20% against the dollar since Ramaphosa took office. The nation’s bond yields are the highest of any country with an investment-grade credit rating.

Ramaphosa said in a speech in London this month that plans to deal with Eskom’s debt will be announced soon and he’d found ways to stabilise the state’s finances that will appease Moody’s Investors Service – the only major rating company that doesn’t classify the nation’s debt as junk.

Focus now shifts to Finance Minister Tito Mboweni, who may give more clarity when he unveils his mid-term budget on October 30.

The president has also pledged to cut red tape to promote investment and commerce and is targeting a top-50 position in the World Bank’s rankings for ease of doing business within three years. South Africa slipped two places to 84th in the institution’s latest list published on October 24.

The president’s hold on the ANC is tenuous and his administration lacks technical experience, said Ivor Sarakinsky, a lecturer at the University of Witwatersrand’s School of Governance in Johannesburg.

“It’s very hard to turn complex organisations around and consensus is probably the best way in order to ensure sustainable results,” Sarakinsky said by phone. “If he goes into these processes and uses the authority he has, he can alienate people who are sitting on the fence and push them over to the other camp.”

Besides the lack of clarity on plans to fix Eskom, investors remain in the dark about how a contentious ANC decision to change the Constitution to make it easier to seize land without compensation will be implemented.

Also, proposals made by the National Treasury in August that the state relinquish its near-monopoly of electricity, port and rail services and privatise assets were met with a lukewarm response from the ruling party.

“There is disenchantment with the pace of change,” Mcebisi Jonas, a former deputy finance minister and incoming chairman of telecommunications company MTN Group, said in an October 24 speech. “We need a few measures of shock therapy to get the economy growing. It’s not delivering more speeches, it’s about doing.”

Finance Minister Mboweni notes that even when the government and ANC do take decisions, it doesn’t follow through on them because the state lacks capacity.

“If at least we implement about 30% of the things which we say we’re going to implement, we’ll be making great progress,” he said in a speech in Pretoria, the capital, on October 17. “We have a problem in that the key economic actors are not moving in the same direction, they’re pulling away from each other.”

Anyone expecting Ramaphailure and his cronies to improve thing are dead wrong!! EXCEPT FOR ZOOMER THE REST OF THE LOOTERS ARE ALL STILL THERE!!

As the DA is ex-growth, Cyril and Tito take over the leadership and change its name to NewANC. They take the NDP with them, together with any ‘old ANC’ people with something positive to contribute. They use the administrative acumen of the present DA machinery, with private sector support, to get the NDP implemented, without Cosatu and the SACP dragging on their trouser belts.

Us the majority would never vote DA or anything associated with it to power. Bear that in mind.

even with ANC policies in the shape of the NDP ? What is it you vote for now ?

It’s good to dream, be positive and believe things can be better, but this scenario sounds like sleep hallucinations.

I’m all for being positive, but I honestly can’t see how you have any hint of evidence that supports this narrative you mention. Please do share what you see which I seem to be missing. Thank you in advance.

I forgot to mention that the ‘old ANC’ changes its name to Al-Cadre.

And they will still be pondering away after his term or terms end.

Let’s face it. The ANC have no will to set these organisations straight. They will never be repaired.

@Cheetah is correct: The ANC needs to split.

The economic policy stagnation is causing more damage to the economy than State Capture.

The Trade Unions have much political influence and no political accountability. They are responsible for the current constipation.

The Trade Unions and Communists must split and form their own party. But CR does not have the guts to do so.