Sentiment was aided by a positive performance by food and hardware retailers.
By Akhona Matshoba 20 Sep 2021  17:04 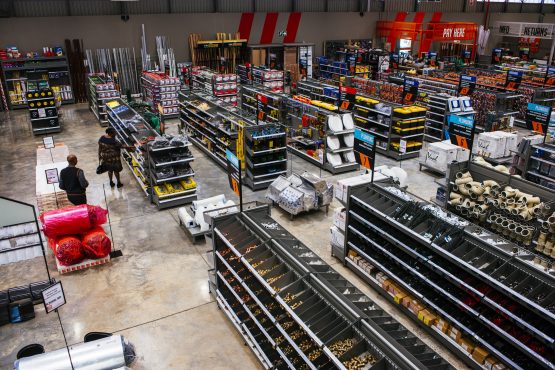 Improved sales volumes seen by food and beverages and hardware retailers in the third quarter of 2021 has led the increase in retailer confidence to a seven-year-high, a Bureau for Economic Research (BER) survey showed on Monday.

Retailer confidence – although not broad-based – for the quarter increased marginally by 2 index points to 56, which is significantly above the survey’s long-term average of 39 points. Sentiment for non-durable (food and beverages) retailers increased from 51 to 58 points  and hardware retailers rose from 65 in the second quarter, to 77 points in the third quarter.

“It’s a positive number, and I think it again reiterates that the underlying South African economy – although not in a great place – is a lot better than what people thought a couple of months ago,” Wayne McCurrie, portfolio manager at FNB Wealth & Investments, told Moneyweb.

The BER noted that the reinstatement of the government Social Relief of Distress grant in August contributed to the increase in retailer sentiment. The grant has the potential to increase the spending power of about eight million people who will be receiving the R350 every month.

The bureau says there is positive anticipation that the reinstated fiscal support will boost household income by about R40 billion in the next six months, benefitting food retailers and bringing much-needed relief to clothing and furniture retailers.

“The non-pensionable cash allowances paid to civil servants from September 2021 will likely benefit clothing and furniture retailers, while grocery retailers stand to benefit from the renewal of the SRD grant,” BER said in a statement.

McCurrie, on the other hand, is not as convinced that the reinstatement of the relief grants will have a significant impact on increasing consumer buying power. He told Moneyweb he believes the contribution of the grants will be relatively marginal.

However, despite the increase in retailer confidence, the sector has seen a decline in sales volumes of clothing and furniture in the reporting period.

“Apart from the sales losses and destruction caused by the deadly riots and looting in KwaZulu-Natal and Gauteng, tighter lockdown restrictions amid surging Covid-19 infection rates at the start of the third quarter left consumers immobile, to some extent, and reluctant to visit malls and shopping centres,” BER said.

Meanwhile, sustained demand for home improvements amid the work-from-home trend and the increase in demand for damage repairs – as a result of the destruction seen in parts of the country- is believed to have supported the increase in sales volumes for hardware retailers.

“This multi-year record is a by-product of rising fuel and electricity prices in the thick of surging global food commodity prices,” BER stated.

Looking forward, the BER stated that retailers are generally pessimistic about business conditions and sales volumes.

“The effects of the civil unrest (which could linger for about 18 months), a weak labour market, the ongoing Covid-19 pandemic and global supply chain disruptions remain causes of uncertainty for the sector,” BER said.

Are all the goods looted recently counted as Sales ??

Isn’t it strange that the government’s announcement about the reinstatement of the grant coincided with high food inflation. It is as if somebody somewhere had a great idea; since the rest of the economy is pretty dead and grant receivers, who will spend the money on food in any case, have some cash, why don’t we raise prices there and make a nice profit? Clearly the market, in such as case, is not working in it’s mysterious way, but is rather blatantly being manipulated. Surely you must be rather soulless if you are willing to do this kind of thing, purely for the purpose of making more profit. The executives at P&P and Shoprite and their brethren can pat themselves on the back for another stellar set of books, but it came at a huge cost to the peoples of this country, struggling to make ends meet. This is exactly how you breed discontent… but as a capitalist that is not your problem. Making profit at all costs, that’s your sole and only objective. Or is it?