South African stocks rallied to a record on Friday, driven by sharp gains in Richemont, after the luxury giant’s earnings beat.

The benchmark FTSE/JSE Africa All Share Index rose 1.1% to a record 69 906.47 as of 1:22 p.m. in Johannesburg. Richemont, the largest stock in the index, soared as much as 10%. A bout of weakness in the local currency added to its allure, along with fellow so-called rand hedges Naspers, Prosus NV and British American Tobacco Plc, which were also among the leading gainers.

“All of these benefit from a weaker rand, which is why we are also seeing selected sectors such as local-facing financials come under pressure as money is shifted toward rand-hedge shares.” Unum Capital strategist Lester Davids said in emailed comments. The rand steadied after sliding as much as 1.6% against the dollar Thursday. 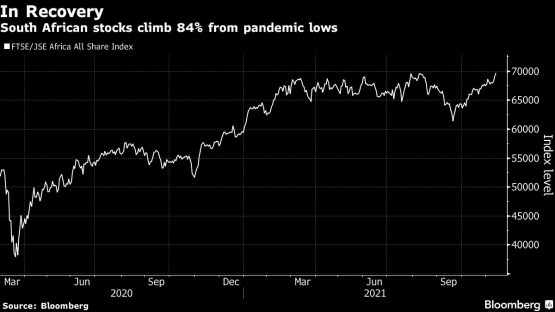 The main South African index has now recovered more than 80% from the lockdown-induced lows plumbed in March 2020 as investors bet on an economic recovery from the pandemic. Sentiment also got a boost this week from Finance Minister Enoch Godongwana’s medium-term budget speech, with Avior Capital Markets saying investors responded positively to his pledges to accelerate reforms to bolster the economy, while reining in debt.

“The JSE welcomes reforms to diversify energy generation to alleviate electricity supply shortages and other steps being taken toward a more competitive energy market,” Leila Fourie, chief executive of bourse operator JSE Ltd., said in emailed comments Friday. “Further reforms related to a spectrum auction and tourism as well as a commitment to a green transition will be positive for an economic recovery.”